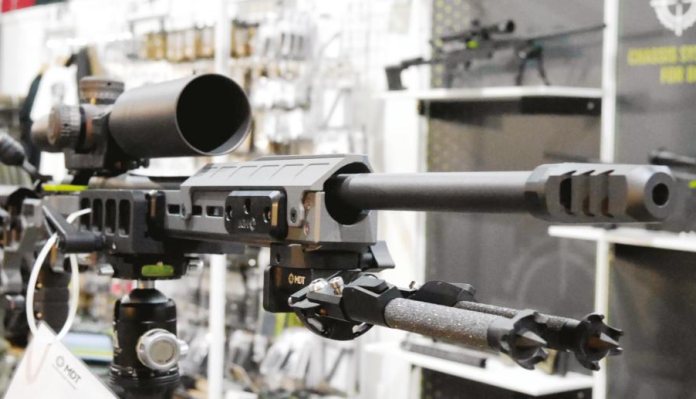 I went to the inaugural Target Shooting Show last year and this year’s event was just as good. Most importantly, it still has the feel of a unique get-together for enthusiasts and specialist suppliers. So, it was the perfect opportunity for competition and club shooters to get hands-on with the latest gear and to meet the industry. Notable was the larger number of classic military and Western firearms on sale. Many older designs are categorised as obsolete calibres, so you don’t even need an FAC to take them home. Some pretty special de-acts were there too, including Vickers, MG08 and MG42 machineguns.

Raytrade, have just taken on exclusive UK distribution for Spartan Precision Engineering, whose lightweight Javelin bipods go back to 2014. Spartan has released the new Pro-Hunt, which sports a gunmetal-grey finish, an improved leg-extension system, and a lever that locks the legs open. Priced around £290, it’s a must have for fans.

Next, a massive multi-gun travel case from Explorer Cases. Dubbed a mobile armoury, it took 12 AR-type rifles c/w magazines, at £549 (minus a £144 show discount). Smaller models are available. All are made in Italy and most are offered in black, green, or tan.

Raytrade also distribute German Precision Optics (GPO). I was impressed by their new 10x50 RangeGuide laser-rangefinding binoculars. These lack the ballistic/ Bluetooth gadgetry offered by some other brands, but they do give you an excellent image, super-fast ranging (static and scanning) out to 2,800m, and a very good warranty (5 years on the electronics and lifetime on the rest), plus a compact and lightweight feel that belies their 10x50 spec. A snip at £1,345.

Raytrade also had a great selection of guns on their stand. Brand new are Marlin’s Dark Series lever-actions. Based on their big-bore M1895 and medium-calibre M336 platforms, these guns sport a matte black Parkerised finish, a black-webbed hardwood stock/ forend, Picatinny optics rail, ghost-ring iron sights, a threaded muzzle, and a big-ring lever wrapped in black para-cord and a similar braided sling. Raytrade has further boosted their UK appeal by getting Marlin to supplement their initial .45-70, .444 and .30-30 models with range-friendly .38/357 and .44 chamberings. Guns should be available early from £1,249 - £1,349.

Raytrade also had a couple of really rare beasts: custom .300 Win Mag rifles in Long Range and Tactical configurations from Nesika. With SRPs of £3,759 and £4,385 respectively, they ain’t cheap, but that’s what you pay for a true premium product individually hand-built by an expert rifle maker on one of the world’s most respected actions.

More fine custom work was on show at Oceanic Defence’s stand, in the shape of Wilson Custom’s elegantly hot-rodded Chiappa Rhino target revolvers. The Rhino itself is a neat, if unconventional, design, uniquely firing from the 6 O’clock cylinder. The base gun is tidily made, which leaves room for an expert pistol smith to work his magic. Richard Wilson also offers a range of individual custom parts, finishes and other upgrades, including his signature Match Master high-rib conversions.

At Wildcat Moderators, I took a close look at their over-barrel Panther model (£149). Designed to be compatible with cartridges running powder charges of 20-grains or less, it is perfect for all the standard and magnum rimfires, plus Hornets, Fireballs, Mach IVs and Vartargs. Anything bigger, even a .204 Ruger, or .222 Rem, and you’ll need a bigger can. The 3-part design makes it easy to strip, clean and maintain, and interchangeable diffusers (available individually) let you switch between ½ UNF/UNEF, 14X1 and 15x1mm threads as required. Dimensions are appropriately compact at 38.3mm OD, 168mm OAL (112mm forward / 55mm over-barrel) and 222 grams in weight. It’s a great looking mod, too.

Black Rifle distributes Modular Design Technologies (MDT) rifle chassis and accessories. MDT’s latest brainchild is the ACC (Adjustable Core Competition) chassis, that allows competition shooters to add up to 6.4lb of additional weight to achieve optimal ballast and balance for their load, stance and style. The ACC also features a flared magazine well and a full-length handguard with a 17” ARCA/RRS dovetail and comes fully assembled with a lightweight adjustable skeleton butt and mounting hardware, although you still need to buy a pistol grip, magazines and any additional weights. They also do an interesting vertical pistol grip, designed for a thumb-up hold that makes more sense for precision shooting than the raked stance of conventional fighting grips, such as the A2. Inlets are available for most popular actions.

Black Rifle are into their .22LR Long Barrelled Pistols too and on the point of releasing an extended magazine for the popular GSG 1911. Details of price and capacity have yet to be finalised, but I understand that compatibility with factory magazine components should make it possible to put together a 31-round stick, enabling competitors to shoot a full stage without a reload.

Even with a full set of go-faster accessories, most of the currently-available .22LR LBPs feel more like replicas than the real thing, so many of us enjoyed using in the distant past. A welcome and genuine exception is the Antreg Zenith 22S, recently arrived at Cotswold Classic Arms. Actually, it’s a .22 upper designed as a conversion unit for Antreg’s own 9mm S Nine and for backwards compatibility with the whole CZ 75/85, SP01 and Shadow 1 & 2 series. CCA are bringing them in as complete UK-legal Antreg builds, however, making this a uniquely-authentic, 100% custom-quality gun.

You get a long sight radius, adjustable rear sight, interchangeable front blades, red-dot compatibility, ambidextrous controls and a choice of frame colours and barrel shrouds. But what counts here is the operation and handling, which are fantastic, plus the sheer satisfaction of having a proper pistol in your hands again, at last. The price tag is a solid £1,800, but the Antreg is just one of those expensive things you shouldn’t mind paying for!

Another route to the true soul of pistol shooting is offered by Alan Westlake in the form of his nitro-powder conversions of Czech Alfa .357 cartridge revolvers. These have a percussion-style cylinder speciallymanufactured to take modern cast-lead bullets, nitro charges, and shotgun primers in place of conventional muzzle-loading components.

A Westlake Alfa goes on your FAC as a Section 1, muzzle-loading revolver: which means the barrel can be as short as 3” and there’s no need for a coat hanger in the rear. The result is a clean-shooting pistol that offers modern looks, handling and performance, albeit at the expense of fast reloads. And for those who fancy something even more special, a 100% Westlakedesigned, British-made Britarms MLR muzzle-loading revolver is also close to launch. Price very much TBC!

Suitable bullets for MLRs are available direct from Westlake, but also, from the Shellhouse Bullet Company. In fact, SBC boasts bullets in an extraordinarily comprehensive range of calibres, materials, weights and styles, in lubed and un-lubed versions, as well as soft lead balls. Shipping charges are based on weight and they aim to make it genuinely economical to get top-quality bullets delivered directly to your door.

Pimped to the max! I’m talking about the Derya Arms Lion Practical L-PAC1. It may be a no-surprises, synthetic-stocked, Berettatype gasser at heart, but equipped with a 24” multi-choke barrel, dual fibre-optic sights on a high, ventilated adjustable rib, extended magazine giving an 8+1 payload, flared pistol grip, scooped loading and ejection ports, an oversize safety button, bolt handle and release, and even a stage-saver; it’s ready to compete right out of the box. Oh, yes, and it’s available with all the go-faster gear Cerakoted in high-contrast red, orange, yellow, green, or blue, and for just £660.

Whatever you shoot, you’ll want a good target to shoot it at, and some of the best fun is to be had with steel plates, gongs and silhouettes. Tom’s Targets offers a comprehensive inventory and support systems for all kinds of shooting. Sensibly, all targets are supplied unpainted, which reduces both production and packaging costs. Striking new additions to the range are a full-sized red deer stag, and a round gong for zeroing thermal riflescopes. The latter has a small angled plate welded onto the rear. The idea is to heat the plate with a blow torch. The residual heat will then be visible to the shooter through a hole in the centre of the (cold) gong.

And, lest we forget, you’ll need some ear-pro. Which also serendipitously permits me to present a special Eureka/ Face-Palm best-brand-name award to: Earmour electronic ear defenders! Distributed by Country Sports Wholesale, Earmor M31s have nice compact cups, a padded headband that presses them snugly but not aggressively over your ears, clear audio, a 3.5mm input cable, tactile control buttons, and run on 2 x AAA batteries protected by a 4-hour auto-shut-down. They also come in a choice of colours (black, green, tan or pink) at one appealing price (£55).

That’s it for this year’s show. My thanks to organiser Mike Darby and his partners The Tunnel Target Sports Centre, to official sponsors Eley, MDT, Black Rifle, Shield Sights, and the UK Practical Shooting Association, and to everyone who attended for making it such an enjoyable event.