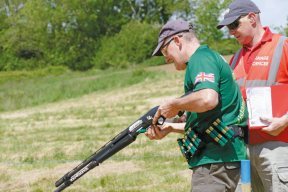 Practical shotgun (PSG) has a relatively low profile in the UK at the moment, but James Harris, director of a new nationwide league run by the National Rifle Association of the UK (NRA), is looking to change that.

The sport has been around for a while, but now it has real potential to increase its appeal thanks to solid organizational and promotional support from the NRA. It also has the benefit of additional incentives to compete in the form of prizes donated by headline sponsors Edgar Brothers and Beretta. From what I saw at a recent meeting, however, perhaps the league’s biggest chance of success comes from its atmosphere: it’s highly charged, and mentally challenging, but still manages to be fun and friendly.

WHAT IT’S ALL ABOUT?

Unlike hunting or clays in more common shotgun sports, most of the targets in PSG are static. It is the shooter who moves, and does so as quickly as they can. The targets are not generally that far away – often not much further than the minimum of five yards. In theory, they’re much easier to hit than, say, a fast crossing clay 40 yards away. But that’s the easy part!

Competitors have to remember where all the targets are – there can be more than 20 per stage, often partially hidden by obstacles such as tyres or trees. There are also penalty targets (no-shoots) placed in strategic spots and any shooter who knocks one down loses points. There are also physical challenges: crawling through tunnels, shooting from bridges, under archways or around screens. In addition, some targets must be shot with specific loads. Most require birdshot, which is, broadly speaking ‘normal’ clay or game cartridges with shot sizes up to #5, and with loads usually up to 32-gram, but there’s also 00 buckshot, and slug.

The most difficult obstacle to overcome, however, is the clock. Every second matters, and as each one passes, the pressure increases, and, as it does, everything else gets harder.

The NRA Shotgun League was launched in February this year during the NRA’s Shotgun Festival at Bisley. Regular meetings are scheduled at a number of venues throughout the year and publicised online via the NRA’s website and social media streams, making it easier for potential participants to get involved.

Sponsorship has also given the league a welcome boost. Support from the UK’s largest wholesaler of firearms and ammunition, Edgar Brothers, has brought the league additional airtime on social media and in print, and given an extra incentive to join in in the form of prizes. On offer this year from Edgars are: a Hatsan Raider 12-gauge 24” semi-automatic worth £652 and FieldHunter 12-gauge 28” pump-action synthetic shotguns, worth £418; and five Hoppe’s Legend Cleaning Kits, worth £27 each.

In order to give everyone, especially newcomers a reasonable chance of winning a prize, all league participants will be entered into a draw for them at the end of the season.

Edgar Brothers’ Managing Director Derek Edgar said: “We are extremely pleased to be able to sponsor the new Shotgun League which is a great initiative from the NRA. New ideas and new ventures in shooting sports are always welcome and I am sure the Shotgun League will be a great success and go from strength to strength. The popularity of the Hatsan Escort has seen it become the biggest selling semi-auto in the UK. The sheer size of the range meant it was a natural progression for Hatsan to enter the PSG market. With our help they produced a model for the UK market and have recently offered an increased magazine capacity to 9+1 (also available in 7+1). Not a company to rest on its laurels we are about to release the new Escort Raider which will offer practical shotgun shooters another option.”

I caught up with some of the league’s participants during its Summer Challenge meeting, which ran over the weekend of 6 and 7 June at the Shield Shooting Centre, near Dorchester, on the Dorset coast.

Run by Steve Pike, Shield is the UK’s only practical range that’s open seven days a week. Built by Steve and his father, it makes good use of the naturally steep contours to provide safe backstops for a permanent suite of 10 ranges suitable for shotguns and pistol calibre firearms. For the Summer Challenge – a highlight in the practical shooting calendar - Steve had devised additional stages in the woods and fields above the permanent ranges.

As with clay shooting, competitors move around the different stands, or stages, in squads. I joined James’s squad as they prepared for their first stage, just inside the woodland.

Orange hi-viz netting marked the course boundaries, highlighting the areas in which the shooter was permitted to stand. The targets – oblong steel plates mounted at ground level – were split between different compartmentalised areas. There was no limit on the number of shots allowed, but more shots means more reloading time and consequently result in a lower score.

Suddenly, the conversation and jokes, which had been flowing freely, stopped as range officer Clive Gamlin brandished his clipboard and explained the stage rules and permitted safety angles. Smiles gave way to expressions of intense concentration as the competitors made the most of their allotted 5 minutes to walk the course, counting targets, calculating shots and pacing out distances. Then the shooting started: it was fast and a few furious words of frustration escaped the shooters’ lips as they scrabbled to reload against the clock.

Seeing people running with loaded firearms is an unusual experience and would be mildly alarming (to say the least), were it not for the fact that 100% safety is clearly at the forefront of everyone’s minds.

The NRA’s target shooters are known as sticklers for safety procedures, and the Shotgun League is no different. Participants paid meticulous attention to safety angles and muzzles were always facing in a safe direction away from the spectators. This entailed a fair amount of running and walking sideways and other ways, and added yet another level of complexity to proceedings.

As she recovered from the adrenaline rush of her round, I asked one of the newer shooters what had drawn her into the sport. ‘It was the excitement and the atmosphere,’ she explained. ‘I already do a few different types of shooting, but as soon as I was introduced to this, I was hooked.

Seeing the targets fall is incredibly satisfying and I love the variety: some stages you even shoot coming down a slide, or from a swing! The only downside is that, not being able to shoot with a Section 1 shotgun yet, I’m always one of the slowest. But I’m getting faster, and the application for a Section 1 is in.’

Another recent convert in the squad, was Lee Bowditch. Though new to the practical world, Lee is no stranger to a shotgun, having previously represented England at Skeet. There days, he works as a photojournalist. He was taking pictures of the league’s launch at Bisley on 14 February this year, and, appropriately given the date, came away smitten with the sport and signed up as a competitor. What hooked him was the combination of an exciting, mentally challenging sport, with the fact that everyone involved was clearly having such a good time.

Lee’s Skeet skills stood him in good stead during the squad’s second stage, which was shot from a stationary standing position and involved a few clays. On their own, the clays would have made easy targets to most regular clay shots. They were not on their own, however, they were behind a row of four ‘pepper popper’ targets. The shooters had to hit the pepper pots, making them fall onto see-saw-type constructions and sending clays flying into the air. To post a competitive time, competitors had to knock down all four poppers first, then deal with all four clays, which would be rapidly falling away. The fastest shots posting times of just over five seconds.

The third stage was also shot from a stationary firing point. The eight steel targets here were also static and were relatively close and had to be shot through a low archway, leaving the shooter no option but to get down on the ground. The combination of bright June sunlight and thick foliage created a patchwork of light and dark that made it hard to keep track of all the targets.

For the fourth stage, the squad was allowed back on its feet to deal with 22 static steel plates, half-hidden under the trees, on the edge of ditches and behind tyres. Shooters were allowed to move, but were limited to a roped-off shooting area and angles of fire were limited by large screens. Having to spot and count targets and reload, all while on the move was no mean feat and provoked some misses and wry smiles on the faces of even the most experienced.

The fifth stage was shot over a larger area in open fields. It comprised a mixture of static paper, steel and clay targets at a variety of distances from the shooter, who was allowed to move around inside a roped-off area and along a wooden bridge.

Ammunition choice was now an issue: hits on the paper targets only counted if scored with buckshot; the steel targets could sometimes be knocked down with birdshot, but the lighter pellets often lacked the punch to topple the plates; and it would be very difficult to break the clays without the tight pattern of birdshot. Brains hummed as competitors deliberated over which loads to put where, and tried to remember what loads they had left mid-stage.

The afternoon’s layouts, on Shield’s permanent ranges, were more compact but still demanded a high level of mental agility and a few physical contortions from the competitors. There were tunnels, narrow apertures and penalty targets to negotiate, plus a stage on which only solid slug ammunition was allowed. By the time the final shots had been fired, the shadows were stretching and brains and bodies were looking forward to a break and a cold beer.

The Summer Challenge is a two-day event and the following day a fresh batch of competitors were being put through their paces. In the final reckoning, the winners were:

WHAT YOU NEED TO GET STARTED…

The NRA’s James Harris has the following tips to start you off:

GUN: This depends on division and funds available – make sure you have enough left for ammunition to practice with. For Open class a box magazine is practically a must: the new Escort Raider from Hatsan (RRP £652) should be of interest as well as the Bora Barak BR99 (from around £499) and Saiga-12 (from around £[999]). For Standard Auto most people choose a Benelli M2 (RRP from £1,100) or Beretta 1301 (RRP from £1,110). In Standard manual, it’s either a Benelli Nova/ Super Nova (RRP from £625/£700) or Hatsan Escort

AMMUNITION BELT: The simple break free Prodec belt is a good starting point, prices should be no more than £50 including P&P. From there it’s a choice of Shell caddies at about £20 each (you will need 7 at least) or load two/four belts that can cost up to £300 to fully set up.

LEGAL: Firearms certificate: to compete seriously, you need a Section 1 shotgun. Legally, it’s not possible for anyone who doesn’t have a licence for a Section 1 shotgun to shoot with one; even borrowing one in the presence of its owner is forbidden. Therefore many newcomers have to start with a three-shot gun (Section 2), and resign themselves to slower scores until the new licence or variation comes through. Participants also need to make sure they are adequately insured.