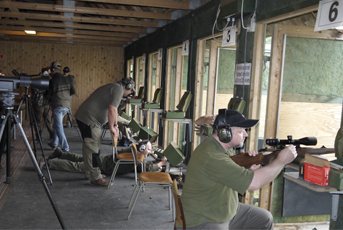 Since 2011 Zeiss seems to have got more proactive as that was the year of their first Media Hunt and I along with journalists from all over the world got the chance to have a factory tour and use the new Duralyt scope range along with some hunting. I never got invited to the 2012 event, so assumed I blotted my copy book, but I can’t recall mentioning the war… However a call from Armin Dorbat of Zeiss saw me and a Norwegian and Danish journalist at Zeiss HQ at Wetzlar about a month later for three days of intensive shooting and hunting use on the prototype Victory HT optics.

Optics are impressive and use the new Schott HT (high transmission) glass with the scope giving a guaranteed 95% light transmission. This ability and that of the binoculars was proved in night shooting. Plus Zeiss have used nano technology to reduce the size of the red dot illumination so it keeps within the cross hair, which is a definite plus for many situations too.

Zeiss has just sent me a production Victory HT scope (3-12x56) which I am in the process of testing. Not long after that I got a message from Armin inviting me to the ‘first Zeiss field shoot’ at Ulfborg in Denmark, so what was that all about? For some time they have offered their own bullet drop compensation (BDC) system for some of their scopes, which they call ASV. The build consists of a pull-up to unlock top turret that is rotated to dial in the range, with individual calibres and ballistics handled by film strips (stickers) with range markings on them. Tests showed it worked well enough.

They have now improved the ASV system and fitted it to the new Victory HT models and we were at the Skyttcenter (shooting range) at Ulfborg to test it and we and the scopes would really be pushed to our limits in the process. The culmination of which, on the Sunday was a 10-stage field shoot, which consisted of animal scoring targets and steel plates from 50 to 600m. No bipods allowed but you could shoot off your back pack and use a set of shooting sticks, plus mandatory stages where you were required to adopt positions supported and unsupported as well as use iron sights. I will detail this next month, as there’s a lot to talk about. Suffice to say we probably walked about 5-6 kilometres between stages and checking targets in what I can only describe as African temperatures. It was hard work, challenging and a lot of fun!

On arriving at the Skyttcenter we went to our rooms where we found a Sauer 202 rifle in 308 Win fitted with the new 3-12x56 Victory HT scope with ASV in swing off mounts, loden back pack, tripod sticks and 80-rounds of Geco 165-grain Express ammo. This would be ours for the weekend. But there’s more as that was just for the Sunday, as in conjunction with Geco we had a lot more ammo to burn through on the Saturday as we tested and used the ASV and generally had a fun time turning live into empty on a number of different weapons systems and target types.

Ulfborg is amazing as it like Bisley without all the bullshit, and it’s better! It consists of multiple range set ups both in the woods and on the flat land. Here you can shoot any style and even from high seats, with the majority of targets being paper animals with scoring areas – boar, fox, martin, bear, buffalo, deer species moose etc. Along with a mix of reactive steels, some of which automatically reset, add to this a sophisticated zero range with camera- monitored targets and it’s impressive. Plus there’s proper dormitory accommodation and a decent canteen with staff and it has beer.

Working in groups of five and with typical German efficiency (ve have zee programme) we moved around the various practice stages on the Saturday once we had checked zero (100m). We only needed our guns, sticks and back packs for the two Zeiss stages, where we would fine-tune the ASV scopes in preparation for Sunday.

As a hunter I question the use of BDC scopes, but they do have their plus points when it comes to longer range shooting and novices. However they are not a ‘free lunch’ as you cannot expect to plug in a 308 turret and it to conform exactly to the ranges. As barrel length/weight, ammo type/make all play crucial roles in consistent, multi-range performance. If you are going to use this sort of system, which to its credit offers ease of use then you have to take it out and shoot all the distances.

This soon became apparent on Zeiss Stages 1 and 2 as with a 100-yard zero we shot 200, 300, 400, 500 and 600 meters and in most cases the rifles/scopes did not shoot the exact distances. For example I found at 540m I needed to dial my turret up to 560m (20m difference). But once understood it does build confidence as you can just wind in and aim cock on. At the 540m I was able to hit a steel popper, standing off the shooting sticks regularly. Impressive for a sporting rifle, it was here too that wind seriously comes into play, which is still the hardest variable to account for!

The new ASV system uses nine, replaceable, aluminium rings, pre-marked from 100 to 600m in 10m increments and all you do is select the one you want and fit it after you have set zero and it’s a matter of winding it in! Zeiss supply the relevant information for factory loads! The turret is sprung so you have to lift it against the pressure to turn it then it drops automatically, so no worries about anything getting knocked off position! If you reload it’s also possible to supply your ballistics and they will cut you a custom ring.

Overall this is an impressive system, certainly when combined with Zeiss’ super slim reticule and fine-tuned illumination system. This is aided by the smooth pull-out and rotate, seamless rheostat drum on the left of the saddle. Though I still favour the simplicity of eyeball hold-over for hunting out to around 300-yards, I admit it has to be learned, which will not suit everyone. So the new ASV Victory HT system is easier to use and does give your mid/longer range shooting a definite edge.

Our day started with moving targets with running boar at 50m and running red stag @ 50 and 75m. For this we used the new Sauer 303 Synchro XT semi-auto rifle with synthetic, thumbhole stock and adjustable comb. Chambered in 30-06 (Geco 170-grain Express) it was a lot of fun and also for us Brits more chance to practice for boar. On that point Dom Holtam (Editor Sporting Shooter) and Dave Wright (British Field Sports Channel) were along too. Dom, like me, was there to shoot and learn, and Dave to photo the event for his web show. The rest of the press were mainly from Europe with a few guys I had met before.

Ammo was not an issue as Geco was used throughout and I reckon Dom and I chewed our way happily though 50/60-rounds apiece on the two moving stages – oh yeah baby! After that it was Zeiss 1 & 2 for the serious stuff as described. Then onto a more fun shoot with 9mm handguns. We had two Glock 17s a SIG P226 along with their SIG Sport with red dot sight on top. With balloons and exploding Firebird targets to blow up I had a great time and even felt I was getting my eye back in a little, maybe!

The final stage of the day was hosted by Geco and to me was fascinating as they were shooting blocks of ballistic gelatine with their own Express (BT) and Plus (protected hollow point) brands. This was the first time I had ever seen this done in the flesh as it where. Slicing open the blocks with a cheese wire revealed the classic, bulb-shaped cavity, which in some cases was big enough to put your fist in - it really brings home what a properly designed bullet can do. Likewise and especially on the ballistic-tipped Express the amount of sub fragments that break off and do a huge amount of secondary damage too.

The final stage was really fun as we had the chance to shoot the Accuracy International (AI) .50” cal sniper rifle along with a Blaser LRS (Long Range Sporter) in 338 Lapua Magnum. The 50 was OK but I still reckon the 338 is the better and more accurate calibre…

As I said Saturday was both fun and interesting with going hands on with the ASV system. But as we will discover next month
- Sunday was the killer in terms of shooting skills and endurance.