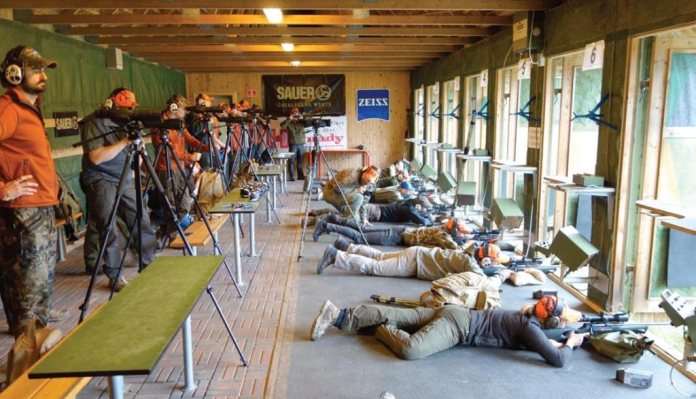 Zeiss has run a very successful media event at the Skyttecenter near Ulfborg, Denmark, for a few years now, and this year I was lucky enough to get an invite. Co-sponsoring the weekend were Sauer, Hornady and Harkila, who provided rifles, ammunition and essential ancillary equipment.

Standard issue for all participants were Sauer S404 Synchro XTs in .308 Winchester, fitted with a Sauer Ergo Rest sling and a rail-mounted, Zeiss Z8 1.8-14x50, and fuelled by Hornady’s new 178-grain ELD-X Precision Hunter ammo (lots of it!), plus a set of camo quad sticks from Decoy (Seeland), and a Hornady TUFF backpack to tote all our gear around in, and to shoot off. I also got to field test a great new pair of Harkila Light GTX 7” boots.

In addition to ample hands-on experience with this top-end gear, we also got to try out several other interesting new products from Zeiss and Sauer. Zeiss’ offering is under wraps for now, but Sauer’s included a new carbon-fibre-stocked variant of the S404 called the XTC, a laminate thumbhole variant of the S101 called the GTI, and the new “no-frills” S100 rifle, plus an over-barrel sound moderator called the Titanium Pro, made by the Norwegian firm of Freyr & Devik, and a new carbon-fibre bipod called the Pro Flex, made by the UK’s own Spartan Precision Engineering.

Each of us shot some 200-300 rounds of Hornady’s Precision Hunter ammo over the course of the weekend and our experience of its accuracy and consistency was universally positive. Hornady gave it an extra dimension, however, by demonstrating the impressive terminal performance of their 178-grain ELD-X bullets in ballistic soap at distances/ velocities from 50m/730m/s (55 yds/2,400 fps) to 320m/600m/s (350 yds/1970 fps).

Discussion of ELD-X projectiles has previously hinged on their external ballistics and specifically on just how significant the real-world benefits of their heat-resistant tips may be. I’m sure the advantages for true long-range shooters are there, but I was much more impressed by what the wound channels in the soap had to say about their terminal ballistics, which avoided over-fast/ over-destructive expansion close-up, whilst still delivering decisive expansion at extended hunting ranges.

The ELD-X is an unquestionably sophisticated piece of design. It combines a sleek profile for a high BC (enhanced by its thermally-stable polymer tip), a cavity behind the tip to initiate expansion, a thick jacket to manage it, and a locking ring amidships to put the brakes on and maintain the integrity of the lower half of the projectile. We were only shooting paper and steel of course, but I can see this being a highly effective hunting load.

Sauer’s S404 Synchro XT proved up to the task too. I soon realised I needed a thicker butt pad to keep my forehead away from the scope, but once this had been fitted – a job that was completed in little more than the time it took to get from the range to the workshop and back, I was really able to work with the rifle rather than against it. To take full advantage of the grippiness of the ambidextrous thumbhole stock, heightadjustable comb, and crisp, predictable trigger.

The action was a bit sticky at first, due in part no doubt to the fact it was being operated by a left-hander, but it – and my technique - got a good deal slicker as the round-count rose, and by the second day I could even keep up with the ‘north-paws’ on the moving target ranges.

One thing I’ve been less than keen on with Sauers in the past is their rather tall/ slim build. I felt this rendered them top-heavy with a scope mounted, made them fit rather than fill the palm of my strong hand, and left me pinching rather than grasping the forend. Now, having shot the S404 a good deal and from a wide variety of field positions, I can say that none of this stopped me making good friends with what I quickly came to see as ‘my’ rifle.

I would have liked one of Sauer’s 5-shot magazines though (the standard 3-shot unit needed refilling too often!), and also one of their new Titanium Pro moderators to fit on the threaded muzzle to dampen the recoil/ rise from the punchy Hornady load and make it easier to observe bullet strike.

We did get to examine and try out the Titanium Pro on the zeroing range, however. In a crowded marketplace it’s a distinctive product, with a tapered shape to its aerospace aluminium casing that Sauer claim is stronger as well as more stylish. Inside, is a one-piece baffle made from Class 5 titanium alloy. The rear of the moderator is sealed, but the front part of the casing can be removed, giving access to the baffle for cleaning. You can choose between M14x1 or M15x1 (non-spigoted) threads and 6.5mm, 8mm or 9.3mm bores. The Titanium Pro adds 124 mm (4.9 in) to the rifle’s overall length, is 213 mm (8.38 mm) long, has an OD of 49.8 mm (1.96 in), and weighs just 280 g (9.87 oz), making it a pretty handy item. Sound reduction is quoted as around 27dB by F&D and 30dB by Sauer. I don’t have a price from Sauer but the F&D version sells for a little over £300, so not bad for a titanium-cored unit.

Sauer’s bipod has clearly been developed in parallel with Spartan’s work on their Mantis tactical pod! It offers both a QD facility via a special adapter that plugs into the S404’s forend tip in place of the sling-swivel, and the ability to be folded forward under the barrel if desired; and of course it also lets the shooter track a target and eliminates cant. As useful as Hornady’s pack was as a shooting aid, I couldn’t help wishing I’d snaffled up one of the new bipods to give me an unfair advantage on the prone stages!

I had no such regrets concerning the S404 Synchro XTC, however. Sure, its carbon fibre stock looks great, and the hand-layered fibres, cast and sealed in synthetic resin, make it impressively stiff and wonderfully light (carving around half a kilo off the weight of the XT model); but weight can be the shooter’s friend, adding stability and slowing recoil. Moreover, what we were doing - intense bouts of shooting punctuated by gentle schlepping around a lowland forest - is not what the XTC, or for that matter the carbon bipod, are designed for. But throw a mountain or ten into the mix, rarefy the air; put yourself in a situation where every round has to count, and the XTC suddenly makes plenty of sense. Sauer also claim that their new CF stock absorbs recoil. This may be so, but testing the XT and XTC side-by-side showed that the latter still kicks noticeably more than the former.

We also tried out the new S101 GTI. Originally introduced as Sauer’s entry-level rifle - a role now played by the new S100 -, the S101 is available in a rich array of variants, of which the GTI is the latest. Its key feature is a well-proportioned ambidextrous thumbhole stock in nutmeg laminate, complete with a height-adjustable comb. This is supplemented by a large non-slip bolt knob and an extra sling swivel on the forend for a bipod, but the use of a 56cm/22” sporter barrel and a standard 5-round magazine show the GTI is still primarily configured for the field rather than the range.

All the rifles we shot at Ulfborg were equipped with Zeiss’ supremely versatile 1-8-14x50 victory V8 riflescope. We shot everything from moving targets at 50m to static steel at 540m and the big V8 never failed to deliver. The image is sharp, high in contrast, and really big. A Mil-Dot reticule is available, but Zeiss gave us their #60, an open ¾ duplex design with an illuminated centre dot. Hold-over was evidently to be managed via the elevation turret. Fortunately this was equipped with their ASV, non-linear, drop-compensated dial. Zeiss’s online guide lets you select the dial that best matches your rifle’s ballistics. Once fitted – two minutes with an ordinary screwdriver - you zero the rifle at 100m and then reset the dial. Thereafter, you simply dial in the range to your target and shoot. Whilst not precise enough for small targets or really long ranges, the ASV was fast and simple to use, and enabled us consistently to hit the kill zones of the life-size animal targets downrange. You have to remember to dial it back down between stages, though; typically I and almost everyone else forgot to do this at some point and duly blanked at least one stage in Sunday’s competition!

My trip to Ulfborg wasn’t just about trying out new kit, or about getting some trigger time in, what really made it was the great hospitality laid on by the sponsors: Zeiss, Sauer, Hornady and Harkila, whose representatives made all of us, feel like VIPs, all the time. The experience was enriched too by getting to know shooting journalists from across Europe and confirming that – whatever may be going on politically right now - far more unites European shooters than divides us. Finally, I must thank Harkila’s Morten Brockmeyer, who generously provided me with a pair of their brand-new Light GTX boots after my luggage failed to arrive in Denmark. I couldn’t have made the most of the weekend without them… or without the spare socks selflessly donated by Byron Pace. Thanks, guys!