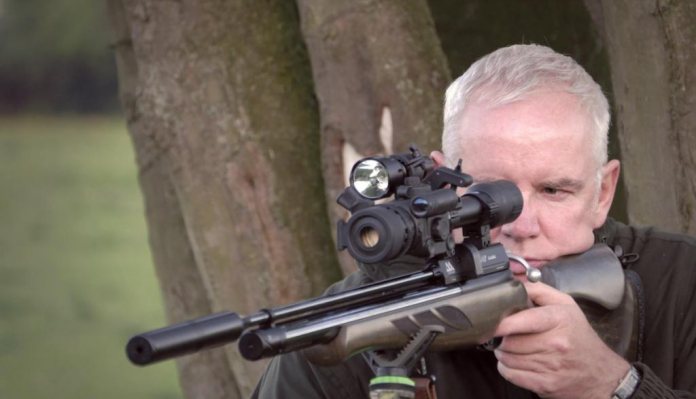 A few years back, I introduced three friends to rifle shooting. Two were keen archers, they understood ballistics, and as confirmed 40 somethings, were (I assumed) old enough and wise enough to listen to some advice. The third, a fella in his mid-20s, had no shooting experience but plenty of enthusiasm.

The introduction followed a familiar pattern. Several sessions of paper punching to get the basics, plus general dos & don’ts, shooting tips, etc. Given their experience with the bow, the older guys had no problems getting to grips with the mechanics. The younger chap was just as capable but naturally had a few more questions. Once the trio were happily nailing 5p groups, it was time to abandon the range and head for the farm. Ratting seemed the logical choice and they took to the task like ducks to water. The end result, a pile of head shot rodents and one very happy farmer. More ratting trips followed, all with the same results, courtesy of a .177 Air Arms S410 and Yukon Photon.

At this stage, the three amigos were enthusiastic to say the least and I found myself being dragged out two or three times a week. Any excuse and they were on the gun, rats were getting nailed right, left and centre. Farmers were smiling from ear-to-ear. Yes, that’s what I said, farmers were actually smiling!

It’s here where I made my big mistake! Confident the guys could shoot, I offered to take them rabbiting. I dragged my .22 FAC Airwolf out of the cabinet, handed over the S410 and off we went. Rough shooting and stalking bunnies added a whole new dimension to the experience and they were now totally hooked.

Even though they’d enjoyed great success with the .177 and been told repeatedly it was the way to go for general purpose sub 12 Ft lbs shooting, the sight of an FAC .22 dropping bunnies around the 50-metre mark seemed to instantly erase .177 from the older guy’s vocabulary.

The following week, all three arrived with rifles of their own. The younger chap opted for a new BSA R10 in .177, which he still owns and shoots regularly.

The older guys had both gone for second-hand Arm Arms S400s in .22. Over the next couple of weeks, the inevitable tinkering began, as the two S400 owners tried in vain to squeeze .177 ballistics from .22 guns.

Within a month, both the S400s were back on the secondhand market. One guy bought a new Weihrauch HW100 and the other an Air Arms S410, needless to say, both guns were in .177. I still shoot regularly with one of them and the S410 is still his go-to ratting gun.

If you have no interest in hunting, or don’t intend to stretch out much further than your zero, does calibre really matter? Simple answer: No. When ratting for example, you will probably never shoot much beyond 25-metres, it’s therefore irrelevant which calibre you choose. You may actually relish the challenge of shooting the rainbow ballistic curve of a .22. It certainly takes skill to stick within the tighter tolerances a .22 demands. There’s nothing wrong with a bit of kudos at the range, if that’s your thing.

The problem, is that shooting is highly addictive! You may start out intending to do no more than a bit of back yard plinking but sixmonths down the line you could find yourself out at all hours and drooling over the latest Night Vision gear. At that stage, you might be wondering how you’re going to sell your .22, buy a new .177 (plus all those lovely NV add-ons) without your other half strangling you in your sleep!

Picking the right calibre is a difficult decision but unfortunately it’s one of the first decisions any shooter has to make. It’s not about likes or dislikes, knockdown power or penetration. It’s all about placement. The enhanced ballistics of the sub 12ft/lbs .177 simply makes it the best choice for anyone in the market for a truly versatile air rifle.

Where is the love?

“Why are you bashing the poor old .22?” In reality, I’m not. I’m actually a big fan and still own a .22 – it happens to be an FAC rifle where the .22 calibre is a perfect fit. I also own several rimfire rifles, so you may ask why bother keeping a .22 in the cabinet at all?

This is the whole point of the article. It’s about using the right tool for the job, with the optimum performance. For certain tasks, an FAC .22 is ideal; you don’t want to be slinging 40-grain bullets up into the canopy, which often makes my .22 air rifle the perfect choice for longer range pigeons, corvids and squirrels.

Optimum performance is the key here. The ideal fps for any air rifle is around the 900fps mark. At 800fps a .177 is pretty damn close to perfection, especially when you consider you don’t need a license to buy one, or land cleared by the bobbies to shoot over.

A .22 does deliver more energy into the target, it’s heavier and retains more energy but sub 12ft/lbs rifle shooting isn’t about energy, it’s about fieldcraft and placement. Placing a pellet exactly in the right spot is everything and that’s much easier to do in the realworld thanks to the more forgiving ballistics of a .177.

Another classic quote – “better energy retention”. A .22 pellet does indeed have better energy down-range but how far are you planning to shoot? 35/40-meters is the maximum range for a sub 12ft/lbs rifle. Can you shoot it much further than that? At paper, certainly. At live quarry in field conditions? Not in my opinion.

On the face of it, the .20 calibre seems like a sensible option but in reality it never really caught on in the UK. It’s a compromise and compromise is rarely a good thing. The pellet choice is limited and so are re-sale opportunities. For those reasons alone, it’s worth avoiding. The .25 calibre is without doubt one of the best choices for an FAC rifle but it’s painfully slow at around 400fps, roughly half the speed of a .177. With just 12ft/ lbs behind it, it’s a non-starter as a hunting round.

A .22 bucks the wind better

Hmm… I’ve never been particularly convinced by this old chestnut. A .22 travels just under 600fps, while a .177 is around 800fps. The .177 therefore gets to the target roughly 25% faster or 33% faster relative to a .22. At sensible ranges, I’d be very surprised if there’s anything in it. If bucking the wind was such an issue, why do the vast majority of competition shooters choose .177? They choose it because it’s faster, flatter and easier to maintain accuracy over varied ranges.

Penetration is an area where the .177 scores well. If you’re planning to nail the occasional Grey, it’s without doubt the way to go. Squirrels are tough little critters and a .177 is without doubt the most effective round for the job.

“You’ve got to be a better shot to use a .22!” In truth, you simply need more experience. Unfortunately, as a new shooter, that’s the one thing you’ll be lacking. It takes a long time and a lot of practise to really get to know your rifle. With a .22, either over or under estimating your range by only a few metres can have dramatic consequences. A .177 is definitely more forgiving and we all need a little forgiveness occasionally.

Out and about after dark

Assuming you get badly bitten by the shooting bug, you are going to end up lamping, or investing in some NV gear at some point.

Range estimation is tough at the best of times but at night it’s a real challenge. Range finders still work but you can’t usually see the display. Dedicated NV range finders are just another expense.

Lamping is the easiest and cheapest option. At least you have your day scope’s Mildots to assist you. The vast majority of entry level NV gear doesn’t even give you that. The bottom line, your range estimation can be sketchy. At night, the flatter trajectory of the .177 can often save the day.

The only real solution is to get in close, at or around your zero. In the case of a .22, your optimum zero will be around the 25/26-metres mark. The flatter shooting .177 will be roughly 33/35-metres, depending on the gun.

Ballistic calculators such as Chairgun Pro and Strelok can provide your MRD (most recommended distance) this gives you the flattest ballistic curve over the largest range. A 10-metres difference doesn’t sound much, but in terms of a .177, it means the crosshairs will be pretty much bang-on between 15-metres to 35-metres with a 30-metre zero. That’s quite a lot of wiggle room and at night you may need it.