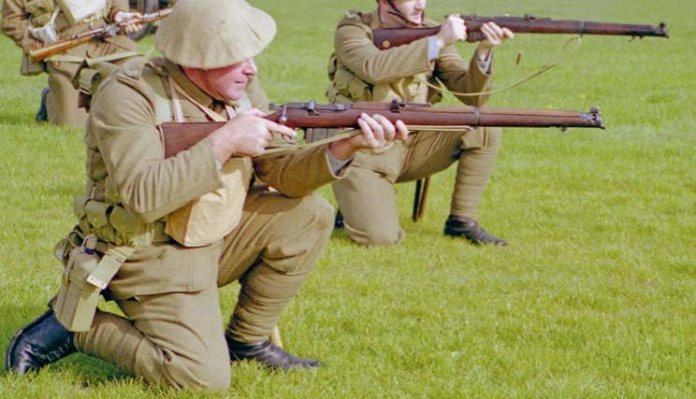 In our lives, there are a number of what I would term as pivotal moments, rights of passage if you will and from a shooter’s point of view, one of these must be the first time you fired a gun or hunted an animal. For me, there are many – full-auto M16, the AK47, my Swedish moose, I could go on at length. But my most vivid was the first full-bore rifle I ever used.

Back then, it must have been 1965; I was 12 ½ and had just joined my local Army Cadet Force Unit (ACF), Croydon Para. A confusing name as we had nothing to do with the local TA Para unit apart from sharing their drill hall and cap badge. I’d been in the Scouts before that but that seemed mighty tame when compared to getting to play with real guns. Even at this age I knew what I wanted to do and that was to join the Army, so the cadets seemed a logical precursor to the main event.

I recall getting issued my Khaki battle dress jacket and trousers, soup plate beret and the rest of the kit, though we had to buy our own boots! Then it was drill, other skills and of course weapons training. This was my first introduction to the Lee Enfield No 4 Mk II and back then they seemed massive. The smell of oiled metal and beech stocks will always stay with me. We practised load/ unload drills and dry shooting using the silver drill rounds with the red stripes on the sides in steel chargers.

Our unit had a .22 rimfire range in the roof and with a motley assortment of ancient bolt-action rifles we learned to shoot. This was good fun, but nothing special, as I’d shot .22s before. What we wanted was to test our metal against the No 4s and maybe even the Bren gun to earn the coveted marksman’s badge for our sleeves, but the Bren’s another story. We also wanted to get one of the brown .303 ammunition outer boxes with steel handles and yellow writing on it. This packaging was another unofficial mark of experience, as only those that had fired the Lee Enfield could be privy to acquiring one. Today, it’s all Oakley shades, fashion and cool trainers, but the concept is no different.

The rifles were our constant companions on exercise and we used them with blank ammunition in our mock battles. Back then, the attitude towards firearms in the UK was almost Swiss in its view. I can recall more than once coming back from a weekend camp and being dropped off at home and being told to – ‘just bring the rifle in on Monday night’. No security, no FAC, just lean it behind the door and the next day walk through town with it to the barracks slung on your shoulder. A friend of mine even took his into a bank and no one batted an eyelid.

But as much fun as all this was, the moment was drawing ever closer when we would get to shoot the No 4s. I liken this to my first ever parachute jump – all that practice can never truly prepare you for the real thing and it’s a case of wondering if you have the balls for the job.

Well, my turn came in 1967. Our commander - Captain Bishop - decided that he wanted a shooting team, so he picked those most proficient at weapon handling and on the larger side, to obviously help soak up the recoil. We drove down to Bisley Camp one early summers day for the first time in our ACF minibus. Back then the zero range was a bit different, though it had wind-back targets and here was where we would get our chance to see if we had the right stuff.

It seemed strange back then knowing exactly what we were going to do in terms of weapon handling, yet with no inkling of the end result of all our labours. And all the time the spectre of bottling out hung heavy, could we, and more importantly would we?

The ammunition arrived in the dark brown plywood boxes with yellow writing - CARTRIDGE SMALLARMS BALL 303 MK VII and I could already visualise strutting around with mine to show I was a rifleman. First of all, kick off the clips that hold the lid on. Inside is a sealed tin container with a soldered lid. Gripping the handle, you rip it off (a bit like a tin of sardines) to expose the 50-round canvas bandoleers packed tightly inside.

Next, prise open the copper clips and tip the ammunition (packed in 5-round chargers) out. Then, check the rim sequence to make sure it was one up one down so that cartridges would feed into and out of the magazine properly. There’s also a lasting memory of the ammunition itself, the case showing signs of heat treatment around the neck and shoulder flowing out to the straw yellow brass of the main body. The huge copper primer at the rear and bullet at the front end. This was the real thing, no rimfires or drill rounds and no mercy!

The seat of the pants

In the mid-60s, things like ear defenders were unheard of and I recall we ripped strips off a handkerchief (clean I think) and chewed them to get them wet and stuffed them in our ears. There was also some debate about whether we should stick our berets inside our shirts to try and absorb some of the recoil. The consensus of opinion was; though it was a good idea, only a cissy would do such a thing, and real men shot with their hats on. God, we were stupid and so full of BS back then.

“So, who wants to go first?” Captain Bishop asked. He’d done it a 1000 times and probably for real too, as the war wasn’t that far behind us in terms of history, as he must have been 50-years old at the time. I stepped up to the plate, something I have always done, not so much due to bravery, but with a need to get it over with. There’s nothing worse than being last in the line and watching your mates suffer knowing you are going to get it soon. What’s that expression - ‘a coward dies a thousand times’?

Going prone, I opened the bolt and with hopefully steady hands, placed the charger in the guide and pushed down with my thumb on the top cartridge. That distinctive clicking/ sliding noise told me that the first five had gone in. I flicked out the empty with my thumb and loaded the second clip, then closed the bolt and set the safety catch. The range was 25 yards, so I just peered through the battle sight and rolled the safety forward. Heart pounding, mouth dry, sweat starting to form, this is it, ready or not here I go. Taking up the first pressure just left the release, concentrate on the sights and BANG! The rifle leapt back into my shoulder and that big old brass plate really hurt. But then again, even today, the No 4 with service ammo is no pussy cat to shoot and I’m considerably larger, but probably just as daft. Automatically, I worked the action and was coming up for my second shot and then in no time the mag was empty and I was showing clear.

Amazing and just so much fun. All of us that day shot the rifles and no one bottled out, though some of the lads left the unit not long after, obviously, it wasn’t for them, but if it doesn’t turn your crank find something that does! Hot and with already bruising shoulders and budding headaches we had the mandatory declaration: “I HAVE NO LIVE ROUNDS OR EMPTY CASES IN MY POSSESSION SIR!” A litany I must have chanted hundreds of times in my service career. Adjourning to the Surrey Hut we drank cider to finish the job. I got my rifleman badge and ammo box and shot whenever possible, then in early 1968, I joined the Army as a junior soldier. Over the years, I’ve shot some exotic kit, which includes 175mm artillery, anti-tank guns and all sorts of fullauto stuff. A lot of it was decidedly more fun than the old No 4 but none can hold a candle to my first time!

Sadly, we never took any pictures on the day and I doubt if they would have lasted, so I apologise and have put in a few generic pictures to illustrate this story.