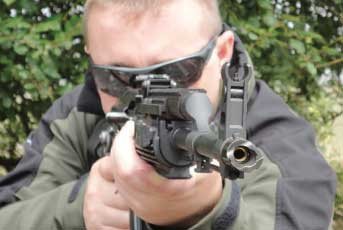 To the trained eye and the casual observer alike, only a close look at an airsoft gun or its magazine will give away whether it is powered by a battery pack or expanding gasses. The Automatic Electric Gun (AEG) is definitely the most popular type of airsoft gun out there but the new kid on the block, the Gas Blow Back Rifle (GBBR) is certainly making a name for itself and gaining popularity. The AEG is a well known technology and has been on the go for well over two decades. Gas rifles on the other hand have been in development for years, but it is only recently that the technology has made them serious contenders on the skirmish field and other professional applications.

How The AEG Works (in a nutshell)

There is a battery concealed within the gun or its accessories that is switched via the trigger. On the trigger pull the battery can power the motor, usually within the pistol grip, which in turn drives a gearbox hidden within the main body of the gun. The gearbox finally drives a sector gear which retracts a piston under spring pressure. Once the sector gear loses contact with the piston it is driven forward under spring pressure. The resulting air pressure in front of the piston is forced through a nozzle and sends the BB down range. The selector switch on automatic capable weapons simply decides which electrical contacts are used to allow the motor to work.

How The GBBR Works (in another nutshell)

The magazine is filled with compressed gas. On the magazine is a valve which when open allows the gas to escape the magazine through a port in the top of it. The workings of a GBBR are all mechanical and work almost identically to that of their real counterparts, with the exception of the hammer sending the valve knocker (firing pin) into the magazine housing to strike the valve on the back of the magazine. The gas then flows into the blowback unit / air nozzle (the bolt carrier group) and a portion of the gas is directed down towards the barrel and propels the BB. The remaining gas shuts the valve and changes direction, forcing the bolt rearwards allowing it to cycle just like the real thing. The selector switch on full auto models moves sears that allow or stop continuous cycling of the bolt.

The End Result Is The Same Thing

The simple answer is: There is no “best”. Only what is most suitable for your needs and desires. Both have their advantages and both have their disadvantages.

The AEG wins this argument hands down and that is for one main reason - high capacity magazines (hi-caps). Using the M4 / M16 / AR15 model as a basis for comparison the AEG magazines hold approximately 300 rounds, with the gas version holding 30 in something the same size. GBBR mags are very heavy compared to that of the AEG so as well as needing 10 magazines compared to one in order to have the same ammo count, the weight of doing so is just plain silly for your average skirmisher. If the AEG user wishes to handicap themselves for more of a test of their own skill, there are mid capacity and low capacity magazines available. As yet there is no hi-cap I am aware of for a gas gun.

Another factor to consider is the weather. Temperature seriously affects the speed at which gas expands which translates to variances in muzzle energy. In the cold it is slow and sluggish, and as I proved in my review of the AK PMC in last month’s issue, in the wrong conditions it can send you way over the site limits and indeed the recommended legal limits* within the UK. It is your responsibility to constantly monitor your GBBR and keep it within site and legal limits. AEGs do not suffer from this to the same degree as there is a spring and piston moving air and not expanding gasses propelling your projectile. Once the spring of an AEG is set to a particular energy (either at manufacture or by modifications) it is next to impossible for that to vary greatly.

*Forensic Science Service recommend that a fully automatic capable gun fire at 1.3 Joules (370fps on 0.2g BB) or less and 2.5 Joules (514fps on 0.2g BB) for semi-automatic guns as this is the point they could potentially be considered section 5 firearms. This has not yet been tested in court.

Again, the AEG takes the chequered flag.  Although the actual gun is similarly priced depending on manufacturer and model, the gas magazines are approximately £32 each (£40 for the CO2 variety) whereas an AEG mag can be had for a little over a tenner. For similar money there can be a 900 to 30 round differential, which can make the fire fight a little one-sided to say the least!

Once again it is not good news for the GBBR. Like your real weapons they require high levels of cleanliness to operate properly. Regular strip downs, cleans and lubrication are required on the main weapon to keep it functioning as it should. The magazines need all the rubber components lubing with silicone to stop them from hardening and losing their sealing capability. Magazines also need to be stored with a small charge of gas (preferably a high silicone content maintenance gas) in order to keep the internal seals in tact. The AEG requires little more than a dribble of silicone on the rubber parts each week after a game and an annual service.

Things aren’t looking too good for the GBBR once again! To be fair, this relies wholly on your maintenance skills and discipline. If you are slack, the GBBR will fail quite often – but that will be your fault. The insides of the AEG are far more complicated and although they are pretty robust and reliable machines when they fail they can be a royal pain in the backside to sort out. Thankfully for us, as the end user, this is not too often (assuming you bought a decent brand in the first place)

Now this is where the GBBR comes into its own and is one of the trump cards of the GBBR. The AEG is like an automatic car, select drive, push the accelerator and away you go. The GBBR is more like a manual. There is more for you to do. More for you to get wrong as an operator.

For the majority of makes and models they are 100% accurate in terms of action, muscle memory operation and strip down. GBBRs also show signs of recoil and muzzle noise but these are the only characteristics that do not fully replicate their real steel twins. Their dimensions are only different in terms of thousands of an inch (unless copyright law suits dictate otherwise) and they are compatible with almost all of the bolt on accessories available for real firearms. The weight of them is very close to the real thing also to the point of needing scales to tell the difference – not necessarily an advantage for your average skirmisher, but definitely an advantage in other applications.

So there you have it. AEGs are cheaper, easier to maintain, lighter, more reliable and more practical on the skirmish field and unlikely to change their muzzle energy depending on the weather. So why do GBBRs exist at all? Well airsoft is all about immersing yourself into a make believe world of armed combat. Many airsofters will tell you the draw of airsoft over paintball is the realism of the kit used and nothing does realism quite like the GBBR. In fact, modern day GBBRs are so accurate in their replication of the real gun that they are currently in use with the military, law enforcement and private security companies as training aids… another draw for the discerning airsofter and re-enactor as it is like keeping up with the Jones’. “If it is good enough for them, it is good enough for me” attitude is prolific in the airsoft world. Is there any need for somebody to wear £200+ Crye Precision trousers to run about playing soldiers every other Sunday? Of course not, but the accuracy of kit all helps in the immersion many players crave.

Are You More Suited To An AEG Or A GBBR?

The truth is only you will know. If you are new to the scene or if your idea of fun is running around like John Rambo and firing full auto all the way I would point you in the direction of an AEG as it is minimum fuss, maximum trigger time with little or no knowledge of the workings of the insides. If you fancy yourself as a “hunter of men” and fancy your own skill at field craft, marksmanship principles and find therapy in tinkering with your gun, or if you simply prefer quality over quantity in terms of your hits on target, then gas is the option for you.