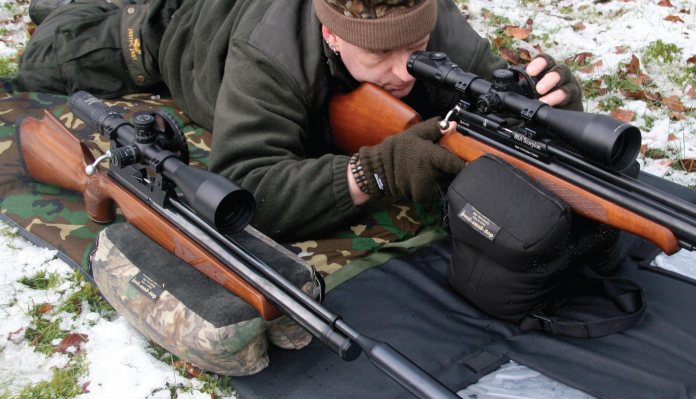 In my work I get to test a lot of new airgun products, including various pellets – note I’ve initially omitted to use the word ‘brand’ as some are nigh on identical, others are actually made by the same companies, sometimes even cast from the same dies. They’re then dispatched to ‘the main players’ to be packaged and ‘branded up’ in company X’s latest ‘eye-catching tins’ and of course often being given a catchy name for added punter attraction. I’m sure many airgun hunters are aware of this, the top FT competitors surely are, but to put this into perspective, many airgun manufacturers like having their ‘own-brand’ of pellet or three on their accessory roster as it gives their customers a pellet to begin trying in their new air rifle purchased from a company of the same name.

However, as a rule of thumb, more likely than not, if the ammo bears a respected airgun manufacturers ‘brand’ name they’ll be good quality. However, remember this: although it’s glibly said when you find the pellet that suits your rifle, stick to it and don’t change. Although it does generally hold true, there are times it’s not so ‘cut and dried.’

NOT ALL FOR ONE

No single particular air rifle, scope and pellet combination will be ideal for all hunting applications/scenarios. Note I mention the ‘pellet’ as part of the air rifle combo because that’s exactly what it is. And the pellet that suits your rifle combo for taking ‘sniper-style’ longer range shots for ambushing rabbits, can often not be the optimum choice for close range ratting and the like. But there are certain factors that are in my opinion written in stone!

The first will be obvious to some but the pellet you eventually choose doesn’t only need to suit your rifle for optimum accuracy but also to serve another very important and specific purpose. In relation to hunting, that is when reaching the quarry it needs do the maximum damage possible to ensure a clean and clinical kill! So in that respect choice of ammo should be dictated by several factors – suitability for the hunting scenario and quarry targeted (including the trajectory over the range you will expect to mainly shoot over) and what is termed ‘terminal ballistic effectiveness.’ In other words how it will behave at the point of impact (POI) when it hits the kill-zone of the quarry in your sights.

THE SHAPE OF IT

I think many agree the optimum pellet shape for general airgun hunting is of course the domed or as it’s sometimes termed the ‘roundhead’ pellet. Personally for me that was another factor of pellet choice that had become written in stone. But fact is that flathead pellets can often be a more considered choice particularly for very close range work against quarry such as rats and feral pigeon. Although I don’t want to confuse matters in relation to this article by throwing in the choice of calibre, I will say I’ve found the shape of the pellet to be not as cut and dried when shooting the smaller .177 calibre. As this is my favoured hunting calibre I feel I have enough experience using/testing different pellet designs to say if using the smaller slug for close range work, even I’ve been surprised at just how much more effective certain popular flatheads and even hollow point ammo is at dispatching quarry targeted. Reason being if you find an accurate pellet in this calibre of such a design it’ll transmit far more ‘shock impact’ with less over penetration at the target end. However, there always seems to be another factor to add to the mix that needs consideration. That of course is the weight of the pellet. For instance, I’m certainly now of the opinion that using a heavier .177 calibre domed pellet for general hunting is the optimum choice for almost all hunting scenarios!

Reason being it still flies flatter than a .22 calibre slug is less affected by wind and other variables and of course transfers more energy/shock transfer at the target. Certain companies actually manufacture the same size pellet in different weights. One that I’ve had most experience with and find is a far superior pellet when used in certain rifles I own are the JSB Diablo Exacts. Now available in two weights of 8.44-grains and 10.34-grains though on paper this doesn’t seem that astounding a difference; believe me the heavier slug really does suit various hunting situations far better than its lighter counterpart. Maybe a reason I’ve long favoured (and still do) Bisley Magnum’s which in .177 calibre weighs 10.7-grains.

If your mate shoots the same make and model of rifle as yours, don’t take it for granted that the particular ‘brand’ of pellet that he uses will duplicate the same level of accuracy if you use it in yours. By all means, use it as a starting point, but look to other popular quality respected brands with similar weight, form and ‘head size’. You may say ‘I know the size, it’s the calibre.’ Unfortunately this isn’t exactly true as certain brands of pellet such as many in the Bisley range are available in two sometimes three head sizes in the same calibre!
Though minutely different in size, usually only .001” in some cases it does make a difference to the accuracy when fired from a certain bore size. This is due to the barrel type, bore and rifling. Again, it’s the same rifle so why? Well, at times, barrels can be in short supply, particularly quality makes, so sometimes gun manufacturers find themselves having to source in the closest barrel to the one they usually fit.

It might only be for one production run of rifles, but then they change back when the barrel manufacturer has caught up on their production levels. This at times is common practice when the situation arises, but companies have good relations with long standing suppliers of any parts they ‘outsource’ (don’t manufacture themselves), so it’s not of a major cause of hassle for the airgun buying public. I wanted to clear that up as it’s this attention to detail that will help you gain the most from your rifle so it will run to the best of its capability.

In this day and age you can’t ignore technology in your quest to find the optimum pellet for your air rifle so do try the free downloadable software programs such as BRC and Chairgun Pro available from Hawke Sports Optics. However, while sitting in the warmth of your home ‘crunching the numbers’ might well give you information on how a certain weight of pellet will perform both in trajectory and its downrange BC (Ballistic Coefficiency). There’s still no real better alternative to discovering how a certain pellet will perform than getting out into the field or target range and discovering for yourself how it behaves at all ranges. Another important factor that I feel gives you fully rounded and informed test results is to take the trouble to test them in what I’d term as ‘real-time’ hunting situations. This means getting out testing them in all-weather conditions and firing them at different angles.

Even when you reach Nirvana and feel you’ve found the ideal pellet for your needs – you’ll always experience what are known as ‘flyers.’ Those inexplicable times you miss a sitter well within range is often due to a rogue pellet - maybe because it’s slightly deformed or damaged. So always scrutinise your ammo – ideally before you set off on your hunting foray or at the last moment when you are loading the magazine of a PCP or direct pellet loading into any type of single-shot air rifle.

As the airgun pellet is the ‘physical’ link between you and the target the importance of discovering the best ammo suited to your particular air rifle can’t be stressed highly enough. And when you do finally find the pellet best suited to your particular needs – as long as your shooting skills are of an equally high standard the results will soon speak for themselves.

As there’s so much, much more that can be written on this subject I intend to return soon to what I’m sure many airgun hunters agree is a very important factor in dictating your level of successes in the field.