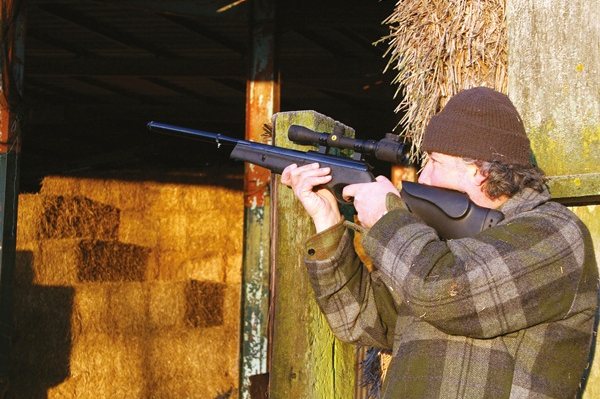 Sooner or later if you are an avid airgunner there will come the thought that wouldn`t it be nice to own an air rifle with a little more power to hit harder and actually flatten that curved trajectory that most pellets have. Beyond doubt is the fact the standard 12ft/lb legal limit air rifle, be it pre-charged, springer or gas ram is the easiest to buy without any complicated and expensive paper work or legal issues with an FAC. It will suit most air gun shooters and provide enough power and accuracy to harvest quarry at no more than 30-40 yards (or even further given the shooter’s ability). In real terms it will do everything that is asked of it with minimal noise, cheap ammunition and safe shooting ranges without the risk of ricochets. The next problem is deciding what calibre to choose, let`s have a look at what`s out there.

Calibre choice breaks down to just four options. It goes like this - .177”, .20”, .22” and lastly the brute-like .25. Each has their merits and pitfalls but all are limited to the 12ft/lbs legal limit. That is not to say that out to 40 yards they can not bring home the game, as they can and rather well!

The smaller .177 is popular mainly due to the lighter pellet travelling faster and thus flattens the trajectory at range allowing for less hold over. However, there are problems with increased wind drift over a heavier .22 although it is slower than the .177. If you compare a .177 trajectory shooting a 8.5-grain pellet typically with the energy figure of 11.5 ft/lbs you can see that with a zero at 30 yards you are still spot on at 18 yards, and then only -1.25” at 40 yards and at maximum range of 50 the drop is 4” (compare that to the 6” of the .22 pellet). This would make the .177 seem a better all rounder given the accuracy from modern air guns are comparable regardless of calibre. But as stated before wind drift, and loss of retained energy down range due to its lighter weight can mean a .177 has to be administered with precision to rely on instant kills. To me this is no problem and I like it for hunting purely for the easier flatter trajectory.

The versatile .22 has always been the hunter`s choice. It combines the advantage of accuracy as well as retaining energy down range from a reasonable weighted pellet, typically 14.5-grains. However having a slower velocity than the smaller .177 and .20 the trajectory curve on a 12 ft/lb .22 rifle is quite pronounced. No problem if you keep the ranges under 50 yards and you practice and make a range card for your best pellet /rifle combination.

Typically if a .22 pellet of about 14.5-grains has a muzzle velocity of 600 fps/11.59 ft/lbs and you zero it at 30 yards you will find that you are also zeroed at 10 yards, have mid range trajectory of about 0.60” inches at 18 yards whilst at 40 yards it drops at least 2” with nearly a 6” drop at 50. Unless you can predict the range and know your pellet’s trajectory, it is easy to see why a rabbit can be missed at long range, I wouldn`t risk it!

My favourite, in truth is the .20 calibre. Dubbed as the all-rounder and long favoured in America it`s suppose to hit as hard as a .22 and shoot as flat as a .177. Now with some excellent new quality pellets like the new Eliminators, JSB Exact, Daystate and Logun Penetrator the .20 is starting to finally taken off here. The Premier .20 pellets were the same weight as the .22 variety and at normal velocities of 607 fps despite their slimmer better ballistic coefficient did not really show any spectacular advantage over the .22 in terms of trajectory curve flattening. But when compared down range to both the lightest .177 and .22 there was a distinct advantage in energy retention and therefore on terminal ballistics. H&N FTT .20 pellets fired at 674 fps/11.7 ft/lbs are a great all round pellet and would be my choice.

This is a funny one, Marmite to some people but the more I shoot this calibre the more I like it! Keep the ranges sensible and it’s a confident performer. What the .25 offers the hunter is sheer short range knockdown power as some times.177 and .22 calibres can over penetrate on game and thus lose some energy transfer to the animal. Not so with the monster .25 this will stay inside the animal and expels all its energy within the vital area. Having said that, I would also say that around the 20-25 yard mark should be regarded as the maximum range for .25 calibre mainly due to the lower velocity giving that lumbering slug a more curved trajectory. Zeroed at 20 yards an H&N FTT .25 pellet travelling at 476fps will be also be on zero at 10 yards, useful if a sight height of 2” is used but at 25yards you are 1.1” low and at 30 this increases to -2.5”. Velocity drops from 476 fps at the muzzle to 381 fps at 20 and 340 fps at 30 yards with energy figures of 9.9, 6.35 and 5.1ft/lbs respectively.

Increase the power level and get your air rifle licensed as an FAC gun and you can really see some of the same calibres shine. The .20 for example, with Premier pellets of 14.5-grains can be pushed comfortably at 960 fps and still retain over 12ft/lbs at 100 yards! I wouldn`t shoot quarry at this range but up rating the power of an air rifle flattens the trajectory and makes it easier to hit your intended mark at normal ranges. To me that’s the advantage!

.22 pellets in the Bisley Magnum class at over 20-grains fair well and when launched at nearly 800 fps/28ft/lbs you still have just under, 22ft/lbs at 50 yards, nearly more than double that of a 12ft/lb gun at the muzzle. The trajectory drop is cut in half, it takes nearly all the elevation drop calculation out and you connect with more targets more easily.

With faster velocity wind drift is much less too. I use a .177 FAC-rated Daystate that shoots 10.78-grain Bisley Magnums at 935 fps/21ft/lbs that when zeroed to shoot 0.5” at 30 yards is only just under an inch low at 50, effectively flat shooting. But with all gains there are inevitable losses, if you own an FAC-rated PCP then your shots per charge will plummet and more refills will become inevitable which may be a factor. In air rifle ballistics the smaller the calibre the less efficient it is, so the .177 is worse than the bigger pellets for draining your air supply.

Pellet choice too as discussed is critical to get the best power and more importantly accuracy from the rifle. Usually heavier brands are better, especially in a PCP. Also remember that in the case of some spring guns more recoil and noise negate the benefits of uprating a rifle.

Usually each calibre works at a peak power, .177 set at 20 ft/lbs seems optimum, .20 calibres set at 26 ft/lbs are sweet with Eliminator or Premier pellets although 28 ft/ lbs can be obtained. In .22 calibres some of the very heavy Eley Pellets can be pushed all the way to 50 ft/lbs and beyond, whilst 30 ft/lbs gives good accuracy and shots per charge on PCPs. The .25 really shines at FAC levels and 25-grain Superfields can be launched at 760 fps/32ft/lbs for some sledgehammer action at 50 yards but beyond this the pellet soon loses ground to the more streamlined .22s and .20s.

New kid on the block is the .30 cal Daystate Wolverine PCP; expensive and exclusive but wow! Pushing a 50-grain Emperor pellet at 230 fps it delivers a whopping 96 ft/lbs energy at the muzzle, with a muzzle blast to equal this! Awesome!

Reality dictates that the standard 12 ft/lb guns will always reign supreme, primarily due to the ease of ownership and no FAC. They also embody the real challenge that airgun hunting is known for. It’s not for amateurs, airgun hunting is bloody hard and requires the shooter not only to have excellent field skills but good accuracy and knowledge of your quarry whatever calibre or power level you finally choose.

With energy levels easily hitting 30 ft/lbs from FAC-rated rifles the margins of these guns with relation to .22 Long Rifle rimfires becomes blurred. This is because rimfire owners can feed their rifles a myriad of cartridge length choices that range from 12 ft/lb pipsqueak loads all the way up to High Velocity 170 ft/lb cartridges.

I like the standard velocity airgun which is always more of a challenge and thrill in my book especially when pellets are cheap and there is so much choice out there. Having said that FAC rated air rifles do have their place and rifles like my .20 Eliminator is devastating. But is a high power air rifle better than a .22 Rimfire? It’s debateable but certainly worth it as an additional rifle if you already own a rimfire!