An introduction to Handloading 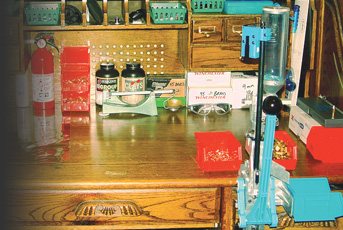 Reloading your own ammunition sounds like a great idea, if only for the money saved. But rather like attempting to build a flat pack wardrobe; if you haven’t got all the bits or know what to do you can end up in big trouble. From the outset I will say: “This is one subject where you really MUST follow and understand the instructions!”

There are basically four legal reasons why we take up hand-loading; to save money, to improve the accuracy/performance of our shooting, to produce ammunition that is no longer commercially available or simply as a fascinating technical exercise. More often than not, elements of all four will apply. However, if your sole motive is to save money then you may well be disappointed by the news that if you have to cost your time, you are unlikely to achieve your objective.

Unsurprisingly, the desire to improve upon the performance of commercial ammunition was the most common reason given for attending the hand-loading courses that myself and my colleagues used to run on behalf of the NRA at Bisley. The loss of handguns has further amplified that need in that we now almost exclusively use pistol-calibre ammo in long guns and handguns with much longer barrel lengths.

The reason we often find our commercial ammo performance less than ideal is quite simple to understand. In order to make any calibre of ammunition as safe and widely saleable as possible the manufacturer has to design it to deal with the broadest common range of firearm environments that it is likely to encounter. So it’s made to an agreed ‘middle of the road’ specification, not just to suit your gun.

Take .38 Special as an example – the manufacturer has to be sure that his product will perform acceptably in anything from a 2” barrelled revolver with a sloppy cylinder/forcing cone gap to a closed chamber, lever-action rifle with a 24” tube. If you’re lucky, the resulting ammo could be superb in your gun but the chances are that it will be nothing more than ‘adequate’. On the plus side, you can buy it confident in the knowledge that it will be consistent and safe, having been produced in compliance with a raft of global safety, manufacturing and test standards.

Within Europe that compliance body is the Commission Internationale Permanente pour l’Epreuve des Armes à Feu Portatives, or CIP for short. Indeed, there is a further benefit, for if this ammo were to be demonstrably and dangerously outside the CIP specifications, the buck would probably stop with the manufacturers insurers. So what sort of insurance have you got?

Unsurprisingly, there are legal constraints applied to the manufacture and distribution of your hand-loaded ammunition. You may hand load ammunition only in those calibres for which your FAC states that you have authority to possess. It is illegal to make and sell any of your reloads to a third party, regardless of whether it is an individual, a shop or a club. However, you may provide the ammunition as a gift to another shooter providing that they have authority to possess that calibre and that an appropriate entry is made on their Firearm Certificate. Again, the recipient needs to ensure that they have third party insurance that covers the use of this ammunition. Also and as a purely personal thing you need to trust the source you are getting it from…

For those who have never hand-loaded before there are two simple rules, start simple and slow, preferably using new kit. I’ll elaborate on that in the next issue. Consider the space that you will need, clamping a press to the coffee table and reloading in front of the television is a guaranteed recipe for disaster. A damp, badly lit garden shed is equally unsuitable. It you have a spare bedroom then this could offer a solution. You’ll need room for a sturdy wooden workbench, good lighting and low heating. If your garage offers these facilities then fine, but make sure that wherever you are going to work, the assembled equipment and materials will not be disturbed by others. Alternatively, allow for packing it all away after use. I’ll give you the scare stories later!

For the safe storage of both the propellants (NOT black powder, which has its own set of legal licence and storage rules) and primers you will need kid/animal/insect proof cool and dry locations well away from solvent/fuel fumes and the risk of fire. There are legally applied weight limits but we’ll discuss those later.

Equipment costs? Well, like anything the sky is the limit, but to get started you should budget for at least £250 - £300 excluding any consumables. Be prepared to do some office work as well! Good record keeping, either on your computer or in a form of log book can prove invaluable. If you decide to carry out any ammo development programs then record keeping will become absolutely essential.

In order to acquire primers or primed cases you will be required to show your FAC to the vendor, to purchase ‘expanding’ bullets you will need to show that you have authority to possess expanding ammunition, usually in the form of a condition on your FAC. As FAC renewal and grant documents often ask if you are a hand-loader, you should notify your issuing Police authority that you are taking up hand-loading. Indeed, it is in your interest to do so since an absence of entries for purchased ammunition at the time of your renewal could otherwise be misconstrued as a lack of firearms use.

Earlier, I mentioned insurance, you should check that your membership of, or affiliation to one or other of the major shooting bodies includes personal liability cover in respect of the use of hand-loaded ammunition. It is also worth checking that its use is permitted on all the ranges that you attend and in the courses of fire that you shoot.

Over the next few issues we will examine your requirements in more detail and make suggestions as to the type of kit that would be best suited to your needs. We will take a step by step trip through each process needed in order to complete the production of you own ammunition.
Until then good luck and please; keep your powder dry!