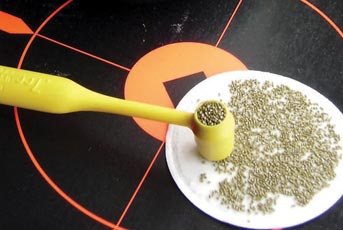 For the second successive month we’re having an oblique look at one particular aspect of our favourite subject. This month it’s powder safety, but not the obvious issues of explosion, double charges, storage or type. We’re actually taking a serious look at Health and Safety - yours and mine. Not the most sparkling subject, but please stay with me on this one.

We all know about European Regulations governing the shape of bananas, meat content in sausages and noise limits for privately owned lawnmowers but what about cancer risks from freely available commercial products… including some propellants? Enter Regulation (EC) No 1907/2006 of the European Parliament and of the Council of 18th December 2006. I reckon the legislators were paid by the word as the suite of documents made War and Peace look like a pamphlet. It took me over a week to speed read them. It concerned the Registration, Evaluation, Authorisation and Restriction of Chemicals (REACH).

During 2015 a number of new controls imposed by REACH will come into force within the EU. There were basically two stages to the effects of REACH on the propellants that we use. The first came into effect on the 20th Jan 2009 and covered the classification, labelling and packaging of these materials, identified in their documents as M3 Mixtures. We’ve already seen the consequences of these changes, especially in the design and labelling of our tubs of powder.

The second is far more radical, with the introductory document claiming that “This Regulation should contribute to fulfilment of the Strategic Approach to International Chemical Management (SAICM) adopted on 6 February 2006 in Dubai”. These regulations are being phased in over a period of years, the dates being determined by a raft of factors including the extent of the hazard, the amount of material involved and the frequency with which they’re made or imported.

They require the removal or redesign of ingredients such as deterrents and stabilizers which are known to be carcinogenic either by direct handling, ingestion or inhalation as a residue of deflagration. Whilst the Alliant range of propellants do not currently require modification, some of those from Hodgdon (made for them by St Marks Powder Inc and others) and from various manufacturing divisions of Eurenco such as SNPE, are subject to manufacturing changes. I also believe that certain propellant products from almost every other commercial maker are subject to the need for change, but at the time of writing they’ve not responded to my enquiries.

Deterrents and stabilizers are some of the added ingredients used to enhance the properties of single, double and triple-based propellants. Deterrents are mainly intended to assist in controlling the rate at which the propellant is consumed, or deflagrates. These are mostly applied in the form of a coating but can sometimes be a part of the actual chemical mix. Many are relatively harmless but a few are known to be injurious to health. Stabilizers are often complex chemical preparations added to the mix of base ingredients or introduced during the solvent processes. Their primary task is to retard the rate at which organic materials such as nitrocellulose degrade.

The amounts vary but are generally in the region of 0.5% to around 2.0% of the volume. Most of these stabilizers are themselves subject to slow deterioration and heir percentage content is carefully monitored by the powder manufacturers. A total lack of stabilizer can lead to the risk of spontaneous combustion in some designs of powder. Most stabilizers are pretty nasty substances but a significant percentage represent a really serious hazard to health. It is these that will need to be engineered out of the propellant chemistry prior to the 2015 deadline.

We already make a habit of wearing cotton or nitrile gloves when handling lead bullets or those with exposed lead material. We also apply ventilation precautions when casting bullets. Indoor ranges (should) have adequate systems for venting the fumes generated during shooting. We wear suitable gloves when using lead and copper fouling removers, especially those of us who prefer to use older, arguably more effective brands that are known to be carcinogenic.

To protect from the modest risks associated with the use of propellants during handloading we really only need to do two things, wear a decent FFP2 twin strap dust mask the whole time we’re working with powders and don a pair of nitrile gloves whenever we intend to actually handle them. In the past I’ve advised on methods of establishing whether a propellant has degraded beyond its useful condition. The colour of the material often goes a reddish brown although this can be masked by deterrent coatings such as graphite. My previous suggestion was to then sniff the contents of the tub, testing for an acrid chemical smell. I’ve stopped doing that, and so should you. Rely on just your British Standard eyeball!

The regulations apply equally to products containing these propellants, such as factory ammo. Yes, I know that’s rather obvious but it may have the effect of imposing subtle performance changes on some brands and calibres of ammo. At the moment it is unclear whether any specific powders will cease production as a result of these regulations, but it is likely that the loading data for some powders will require a small degree of revision. It is inevitable that propellant manufacturers will provide detailed data and appropriate warnings where necessary. You just have to make a note of them. If you’re the club hooligan who insists on rattling the club rafters with your proof load ammo, beware… ignoring the changes could prove to be a bang too far.