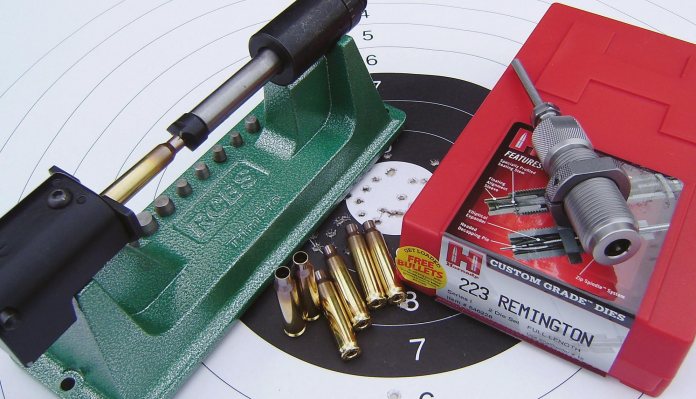 Taken in isolation, there are many simple ‘accurising’ tweaks which seem to have little or no impact on accuracy or which appear to take a disproportionate amount of time to execute. I’ve heard students dismiss these fine tuning tips with words like: ‘I’ve got better things to do than spend all night weighing bloody bullets’! Well, they could be right. If they’re using a variety of rifles with each batch of ammo, just plinking, only hand loading to save money then that effort is largely wasted. Furthermore, for such low demand shooting, the random application of just one or two tweaks is unlikely to create any measurable benefit.

AS GOOD AS IT CAN BE

For the rest of us, the refinement of ammo accuracy and consistency is important. At the pinnacle are long-range bench resters, where the production of the ultimate cartridge is just part of the equation. Whilst the Holy Grail of a one-hole group may be off our radar, we still need optimum performance from our ammo and arms.

Our starting point is not the ammo but the firearm. If it is worn out or highly soiled, then even the best ammo is a waste of time. If it is in Proof and in good condition, then we need to take note of the rate of twist and length of barrel. Slugging the bore will give us some valuable data too. So let’s look at the individual components of a round of ammo.

The cartridge case. We should base every reloaded batch upon brass with the same head stamp and ideally, the same lot number, as well as having a common history. If we start with new, unfired brass, then we must inspect the entire batch for manufacturing defects. Check for the presence of a flash hole and inside de-burr it. Look for any odd ones exhibiting colour variations that could indicate a missed annealing process. Run the batch through the neck sizer and then find the shortest. Assuming that this case is within limits, trim the remainder to match.

Now batch weigh the cases, less messy than checking the water capacity and equally informative. Batch sizes should reflect the application - if the course of fire is 10-rounds, then we know what the size will be. If we’re hunting then the tolerance can increase but we should still segregate the runts and overweights. If there is a risk of mixing them at a later date, colour code the heads with an indelible pen. If you can afford the consumables and you’re using all the ammo in one chamber, light load the new brass and fire-form them to your gun. As always, keep an identity sheet with each batch and record the details. In this article I’ve used a new batch of Lapua .223 Rem, batched around 94.0 ± 0.1. (That’s incredibly fussy but I had another experiment to conduct)

Next, the bullet! Even the best brands sometimes have a runt mixed in the box so again, we start by eyeballing them as we weigh out our batches. With some of the cheaper or mil surplus bullets, the other variable can be diameter – the box may contain bullets from dies of different ages and condition. If you have any doubts then break out the vernier or micrometer!

For the weight check, I start with a sheet of paper and in the centre of the top line, write the claimed weight bullet - for the purposes of this article, 40-grains. The higher and lower weights should be noted on either side of the datum, the range of each cluster really depending upon the application… for pest control with the 40-grain Hornady V-MAX I bracket the weights in 4/10th groups. Ergo, 39.6 ± 0.2, 40.0 ± 0.2, 40.4 ± 0.2 etc. Over 95% will be within the base weight bracket. For Long Range Revolver my 180-grain bullets are batched in just 1/10th groups.

Powder charging can be the undoing of our accurising endeavours. We start with a technical contradiction… we ‘weigh’ our powder charges in a device that is incapable of weighing anything. The conventional powder measure is a volumetric dispenser. This gives us a couple of basic problems, powder settles when shaken or vibrated, meaning that the action of the measure progressively settles and compacts the contents!

As a simple demo, put a brace of mugs on the worktop. Pour uncooked long-grain rice (to simulate ball powder) into one until it is level with the rim. Now pour corn flakes (simulates a coarse flake powder) into the other until level with the rim. Pick up both mugs and tap them to settle the contents. The point it makes is that coarse flake powder will continue to compact in the dispenser for dozens of cycles. For a set volume it means that each thrown charge will get heavier as the packed density increases. Flake powders are more susceptible to this action than ball designs, but they all suffer.

The second problem is one of product consistency. Lot to lot variations in powder density mean that a known ‘setting’ on the micrometer scale of the measure is not reliable. For volume production, the accepted process is to cycle the measure many times, weighing each charge, taking care to tap the handle on the stops at both ends of the stroke until the desired charge weight is consistently thrown, ish! Even so, the design of the measure means that it has a built-in percentage error, from my experiments I would estimate it to be around ± 1%.

Whilst there are now a couple of precision powder dispensers with weighing and trickle functions that can drop charges consistently to better than 0.1-grain, we can achieve similar results with a slightly laborious two stage process. Use your dispenser to throw a slightly lower charge than required then top up with a trickler. Always remember to limit the exposure of propellants to sunlight and the atmosphere beyond their tub or container.

REPORT FROM THE CHRONO

I produced a number of test batches of 40-grain V-MAX .223 ammo. The propellants used were Hodgdon CFE223, Ramshot X-Terminator (both fine spherical powders) and Hodgdon H4895 (a cylindrical kernel). All charges were adjusted by interpolation to give a mean velocity of just over 3400 fps. The individual, and average velocity, as well a Standard Deviation (SD) for 10-shot batches was recorded for each propellant loaded by two methods.

One was loaded in un-sorted cases, using un-weighed bullets and with the charge thrown directly from a powder measure. The second was produced using the methods outlined above and with charge weights all within 0.1-grain. COL was designed to give .015” bullet jump. Barrel was scrubbed between each batch. The SD of the accurately assembled batches was always markedly better than the other, the most notable being for the H4895 with S.D.’s of 14 and 39 respectively. That’s worth the effort!