Reloading: Mistakes, I’ve Made a Few… 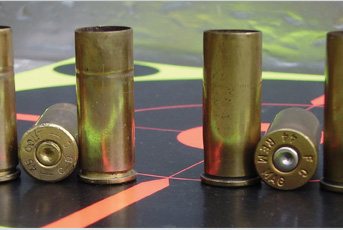 No matter how diligent you are, mistakes will happen. Some are easier to spot than others, some may only manifest themselves ‘after the event’ and some can wreck your gun or even worse, your life. If you reload more than one calibre, or for more than one firearm, then the issues of storage, record keeping and labelling are the most common causes of trouble.

Let’s start with components - and a confession. Some years ago I managed to confuse a batch of small rifle BR primers for small magnum pistol types… resulting in embarrassing misfires during a Silhouette comp. The gun’s firing pin strike did not have enough grunt to consistently deform the stiff BR cups. How did it happen? I’ve got several Lee Auto Prime hand tools and made a stupid assumption. Lazily, I’d left primers in a couple of them. In one of them the cup colour was right and the reddish lacquered explosive visible through the Auto Prime lid looked familiar. Rule One – return unused materials to the original packaging.

OGIVE SHAPE – BEHIND THE CURVE

Beware of bullets that ‘look’ the same… mixing rifle bullets from different makers can be disastrous. We’ve already explored the term Cartridge Overall Length, COL, (sometime referred to as Overall Length) but let’s remind ourselves of the danger of misusing this dimension. Many bullet makers’ manuals quote this figure based upon their own ogive design and weight – ensuring that the cartridge pressure should be safe in a SAAMI dimensioned chamber with correct headspace. That figure makes an assumption about your chamber length that may well be incorrect.

Best practice is to take a fire formed, but not resized case and test seat a bullet. Ensure that it is a friction fit in the neck and seat it slightly long. Chamber it and gently close the bolt. The chambering action should position the bullet against the rifling and leave a lightly engraved mark on the ogive. Carefully measure and note the overall length of this dummy cartridge. As a good ballpark, your cartridges loaded with this bullet should be .010” shorter. That’s your C.O.L., the .010” representing the freebore (Leade), or ‘bullet jump’ for that cartridge in that chamber. Alternatively, there are proprietary gauges on offer from Hornady/Stoney Point, Sinclair, Forster and other tool/die makers that can do the job for you.

But here’s the assembly problem – an almost identical bullet from another maker is likely to have a slightly different ogive and give a significantly different fit in the seating die. Ergo, don’t mix your bullets. On the subject of seating punches – don’t bodge or compromise. A poorly fitting punch will inevitably lead to either bullet damage or inconsistent seating depth – or both. Extra punches are only a tenner or so.

WHAT’S IN A LABEL?

Have you ever been given a tub of powder? You know, good old Fred at your club decides to quit shooting his LBR and dispose of all his kit – and you get his grey tin of Nobel ‘stuff’. The handwritten label says Revolver 1. He even gives you his favourite .38 Special recipe. Hmm. Just do the maths, which costs the most, a replacement revolver or a tin of powder?

So you store your loaded ammo in MTM plastic boxes? Nothing wrong with that, but do you label the contents? Labelling the calibre, number of times reloaded, powder type and weight, bullet make, weight and type as well as the primer make can help to avoid a disaster. Like trying to shoot light loaded .44 Mag ammo in your .45 Long Colt firearm. It chambers rather easily… it even goes bang when you pull the trigger. Knackers the cases though - they end up looking like sailors bell bottoms. Before you get too smug – mistaken identity can ruin the day for bottleneck rifle cartridge users as well. There are several ‘bad’ combinations, one well documented example of which is .308 Win into a .270 Win chambered rifle. Allegedly, the sound is enough to wake the dead and opening the bolt requires the use of a big hammer!

We’ve explored the subtle performance variations that can exist from one tub lot number of propellant to the next. If you’re working within the max/min limits specified by the manufacturer in their manual then these variation will be within safe limits. However, if you’re using canister grade propellants then, in extremis, the change may be enough to take a subsonic load into the transonic or supersonic region, or drop a supersonic round into the subsonic. Always chrono test loads from a new lot number of canister powder and adjust the charge accordingly. Record the revised charges in your database.

If you even think you might have used the wrong propellant, dropped a double charge, seated the bullet too deeply or used a primer that will not work in the gun.. don’t attempt to fire the ammo. Make them safe by taking them apart with the aid of a kinetic hammer (puller). Wear safety specs, only use the puller outdoors and hammer on to a block of wood to minimise damage to the puller body.

Bin the bullets, safely burn the powder outdoors or just spread it on the garden and fire off the primed cases in your appropriately chambered firearm. If the primers do not detonate then don your safety specs, clear the area of any combustibles and carefully de-cap the cases. You may read advice that suggests adding a solvent to the primed brass and allowing it to degrade the primer compound…. nah; it just adds more fuel in the event of the primer detonating when you de-cap it. If you’re pulling a round that has a bullet that you wish to retain… add a foam bung or a ball of bog paper inside the end of the hammer to reduce impact damage.