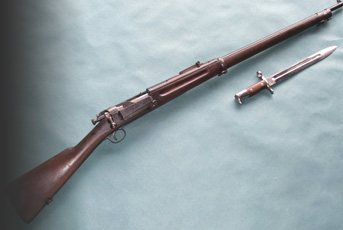 The .30-40 Krag earned the title of ‘first smallbore’ military centrefire cartridge with its novel .308 ‘small’ calibre bullet. Almost all previous metallic military rifle ammunition was based on blackpowder-powered, large capacity cases pushing huge lead projectiles of .40” +. Designations were often simplistic, describing charge weight and bullet diameter; such as its predecessor, the .45-70 Government.

In 1889 the request of the U.S. Army for an improved military rifle and matching cartridge resulted in a quantum change in ammunition design. It gave us the .30 Army or .30 Government cartridge, better known as the .30-40 Krag. It was adopted in 1892 together with a new rifle, officially called the U.S. Magazine Rifle 1892, but better known as the ‘Krag’ after it’s co-designer, the Norwegian Capt. Ole Krag. Evolutions were the Models 1896, 1898 and 1899. The rimmed cartridge initially had a .30 calibre 230gn steel-jacketed bullet powered by 40-grains of single-base nitro propellant. Indeed, it was the first ever nitro-powered U.S. military cartridge.

The 230-grain bullet was quickly changed to a cupro-nickel jacketed 220-grain flat base, round nose design giving just over 2000 fps at a modest pressure of 40,000 psi. On the plus side, the combination of this round and the new Krag rifle gave remarkable accuracy out to around 550 yards coupled with comfortable levels of recoil. Indeed, new accuracy records were set by Col Townsend Whelan and Dr W G Hudson at ranges of up to 800 yards. Sights on the Springfield-built Krags were optimistically calibrated at up to 1800 yards. The Krag rifle and cartridge were superseded just after the turn of the century by the Springfield M1903 chambered for the rimless .30-06 Springfield.

Whilst Ruger, Remington and Winchester chambered their No.3, 1897 Rolling Block and Model 1895 rifles for the 30-40, it is the Krag that still attracts enthusiasts to this calibre. Of the half million produced there are still several thousand in shootable condition. They’re eligible for a number of HBSA comps with good examples currently changing hands for between £600 and £1000.

However, not all Krags are equal. Inconsistencies in 1890’s barrel production saw bore sizes in the range of .306 to .314”. Bear in mind that chambers were cut to suit the extremely long military cartridges based on 230 and 220-grain bullets. You’ll need to use hybrid loading techniques with lighter boat tail bullets and modern propellants in order to maintain accuracy. As an alternative the .30-40 is a suitable candidate for the use of cast lead bullets.

Hunters in England and Wales could legally employ the cartridge on all species of bambi but the Scottish velocity caveat makes it marginal north of the border. Of the range of modern propellants available, Hodgdon’s spherical H380 gives the closest ballistics to the original ‘nitro’ load when used with heavy bullets. Brass is still available from Remington and Starline. Die sets are offered by Lee, RCBS and Redding. As for bullets, well, it’s .30 Cal… the first modern one. Ready-made ammo is produced by Hornady and Remington amongst others.

Thanks to Bob Cockerill, Ron Bunch and Rod Philpott for their valuable input.