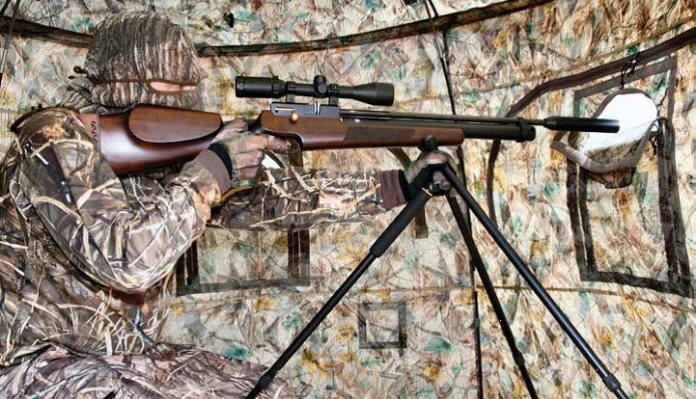 As autumn gives way to winter and the fields begin to look uninviting, waterlogged and barren of any form of life, don’t be discouraged, as our main pest species are still around. It’s just that as the temperature plummets and foodstuffs aren’t as plentiful, they go into ‘survival mode’, as they adapt to the harsh weather.

Granted, some species are nigh on impossible to target, the rabbit often being the most unpredictable of all, as to its feeding areas and times it will be active. Sport will mostly be found in the woods, as avian species use the cover of the trees to shelter from the weather and feed on winter berries and whatever else they can forage. Squirrels and jays will visit areas they’ve over the previous season been busy stashing acorns and such like, but they’ll also be active and targetable.

The grain stores and spillage in the farmyard will attract most flying felons and of course the barns, which often hold winter feed, haybales etc, will now certainly have become winter accommodation for rats. Also, the rafters can be a magnet for feral pigeons and collared doves to roost. So, like any other season, if armed with the right knowledge, even in winter, the airgun hunter still has a varied selection of pests to deal with.

Decoy tactics still work for woodies but only if used in specific places. A few lofted deeks near sitty trees give the birds confidence the area is safe, especially if there’s good natural cover nearby to use as a hidden shooting position or alternatively use a ‘pop-up’ hide. In fact, due to the weather, hide shooting can now be one of the airgun hunters ‘best tactics’ to use for numerous situations. Also, at times woodies and even corvids, will come down to deeks placed on the ground – especially set asides where they pick around for wild flowers, shoots, seeds and clover, so never ignore this tactic.

By mid-winter, the woodies will be even easier to target in trees with sparse foliage and easy to spot against ivy covered tree trunks. They can become uncharacteristically careless as they gorge on the berries; so, if you find trees they’re regularly visiting, being in the right place at the right time can produce results. Roost shooting is still a tactic worth using but due to the brief time you’ll have as the light fades faster this time of year, it can often be just a sporadic 15 minutes of sport.

Also, head for the sheltered areas, such as copses and the lee side of woods, as you might be pleasantly surprised at what can be found in the trees.

At the end of last season, you should have started to establish a ‘baiting station’ for squirrels because now it’ll be well visited if you’ve not overshot the area. Wood-walking can yield a nice mixed bag where squirrels will always be amongst the trees but also, you’ll often find them scratching around on the woodland floor. Here, the soft-footed shooter can sneak up within range, because if its head is buried in the ground, it’ll not notice your approach.

The rabbit will have had a lot to contend with to survive to this time of year, so expect them to be very twitchy. Ambushing is by far the most productive. The bonus of morning sessions is you won’t have to get up at an ungodly hour before the sun rises. But you’ll only have a very short space of time (shooting window) as the rabbits will emerge less and less as the month’s progress and their time spent outside the burrow during daylight becoming shorter by the week. As you should have during autumn, lamping is a tactic to try but they’ll be very wary. So, now’s the time to use a dedicated Nightvision scope. NV will give you the edge, but when we’re in the grip of winter, the rabbit can become almost impossible to target, as it suits itself when to use up energy reserves and what, when and where it decides to feed. Far better to head indoors for the species I’m coming to next…

As the weather becomes colder, the rat will seek shelter from the elements and will be establishing itself in the places the farmer doesn’t want it to be – his barns and outbuildings. Early in winter, rats can be active during the day, especially if they’ve found food, or are only just finding suitable places to inhabit. Sit within range of natural food sources, or areas they’re being seen (if possible find an elevated shooting position as they detect ground noise or vibration very easily) and pick them off with a well-placed shot.

‘Baiting’ an area was once a much-used method. The tactic is simple; the baited area should initially be illuminated with a low light on a regular basis, so the rats become accustomed to it. Food should be left out regularly for up to a week, before any shooting is done. Anything will suffice, from bread to rotten fruit. But as I mentioned earlier with squirrels - use peanut butter, as it sticks to the area you place it.

For many situations, such as this, you don’t need a gun lamp, as the illumination of the low power light near the bait is sufficient. If not, a ‘tactical torch’ and laser kit are ideal to clip on to your rig, also ideal for targeting feral pigeon at roost. (more on this soon). However, where rats have found food and a way to and from shelter, they’ll not respond well to baiting out. This is when it’s best to search them out on their natural runs they use to and from the food they’ve discovered.

Using NV is now the most popular method to operate in total stealth, as you scour the base of walls and never neglect to scan the rafters and tops of structures inside the barn.

Similarly, you can go walk-about with a NV rig, but watch your step; the barn and farmyard can be a dangerous area in the dark! Remember it’s a workplace, so machinery, tools, anything can be an un-seen obstacle.

As for feral clearance, this can sometimes be specialised work, but if you’re not ‘inundated’ with them. Using a lamp/laser rig to spot them up aloft and it’s like shooting fish in a barrel, not sport, but a job the airgun hunter is best armed to sort.

Crows will still be flocking together as they move around fields in search of food, usually in the company of other corvids, such as jackdaws and magpies. If sheep pellets are put out in feed troughs, get within range of one of these areas in a suitable hide and a good few sessions can be had before they move on. Even magpies seem unusually sociable, hanging together in quite large but very tight-knit groups. Towards the end of winter, it’s not unusual to notice some will have paired up and be back repairing nests in preparation for the breeding season to come. So, if you’re not overrun, don’t disturb the birds too early, as this can be a chance next season to bait up nearby to catch the young as they start to leave the nest.

Crows will be the most difficult to target; reason being they can see you coming a mile off. However, baiting down is always the optimum way to get a few in range, as they will be finding food hard to find, so a free meal is hard to resist. Obviously, you’ll need a well-built hide with a roof due to their amazingly keen eyesight – fully enclosed pop-up hides are ideal. If trying deeks, position your hide near a hedge at the side of a suitable field and I’ve found it’s best to use no more than half a dozen at most, set out in a random tight pattern. Simple reason, this is the way they’ll be feeding naturally when not in large flocks.

Both the end and very beginning of the year can often be a very dour and unproductive time to be out on the shoot. And if the very extreme weather hits, which is a no-no for the airgun hunter, no point risking injury or illness when time can best be spent on other matters. So, an opportune time to check your kit. Even though regular routine maintenance on your rifle should be done periodically throughout the year, why not give it a thorough annual check-up! If you hunt with a PCP, now’s the time to seriously consider having it sent into the manufacturer or good specialist airgun-smith to have it serviced. That way, when it comes back, it’ll be working as good as new in preparation for your forays against the fresh influx of vermin that the coming seasons ahead will bring… Good hunting!