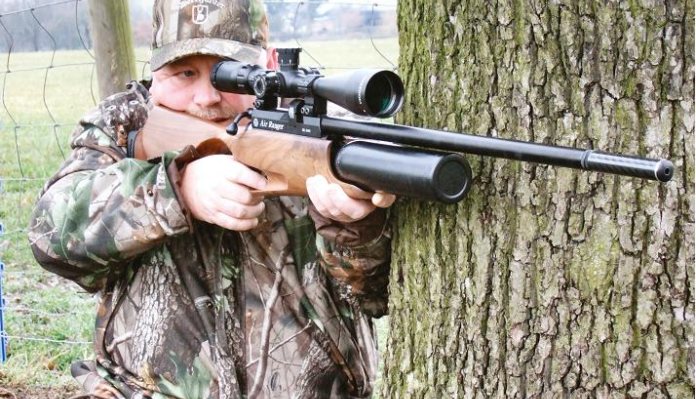 It must be nigh on two years ago that Shooting Sports Editor Peter Moore, (readers will know a diehard live round rattler), wrote a few articles on his experience of trying his hand with an FAC powered airgun. The pieces he wrote on the subject not only included why he chose a hi-power airgun and (which to many would be a controversial choice) why he opted for the ‘muchmisunderstood’ .20 calibre as well.

I felt that his views, after using this very specialised type of gun, were fair from his perspective. He admitted he could see it had a place in certain shooter’s armouries but it didn’t, for his preference, have enough ‘oomph!’ Though I respect his views, I do feel they were slightly marred by the fact he’s more at home dropping deer and wild boar with large calibre centrefire rounds, so it came as no surprise that his interest dwindled.

But he gave it a try and interestingly even admitted he’d probably jumped in a bit hastily in his choice of power rating and calibre of air rifle. Now, in a roundabout way, this brings me to mention that I feel there are definitely other factors I feel very pertinent as to why certain shooters more easily make the transition over to using lower powered air rifles for hunting. One major factor being, did they begin hunting as firearms shooters, or take up using shotguns for birds on the wing. I single out shotgunners because I feel when given the chance to try a non-FAC air rifle – they more easily adapt to it. More often than not they become smitten by what is one of the most challenging of shooting disciplines.

Many shooters who mainly shoot firearms (as do many 12ft lb airgun hunters) tend to overlook the ‘mystique’ and ‘supposed magical misconceptions’ that surrounds an FAC-rated air rifle. So rather than trying an off ticket one first to dip their toe in the airgun hunting scene, they opt for a higher power option.

Now, more recently when the Ed mentioned in conversation that he was in fact set on getting an off ticket legal limit air rifle, I wasn’t in the least surprised. Reason being, upon reading a piece I wrote on how much this type of gun is suited to the woods in the ‘leafless months’ from late autumn into late spring, he realised he was missing out on the opportunity of some exciting hunting opportunities. Those that only an airgun hunter can have, targeting quarry suitable for this power of air rifle in the environs in which it reigns supreme, and particularly at a time of year his other live-round hunting options are far more limited.

I feel this capably illustrates what I’ve felt of this matter, due to the amount of lifelong firearms and shotgun shooters of my acquaintance eventually taking interest in my hunting forays. Obviously, this is more often than not because they have had or have permission to hunt on the same areas of land as myself. Often this interest begins as polite small talk, as in the tale I’m going to relate.

However, in my experience, it more than capably illustrates the hunters who get hooked and drawn back to the humble 12 ft/ lb air rifle have for many many years mainly used a shotgun to take birds on the wing and rabbits on the run. And, it’s not that difficult to realise why - granted these are my personal views - but I’m sure many will find them rational and based on solid, sensible factors.

Firstly, the shotgun is the tool for a moving target but it has a limited range and depending on bore, choke and cartridge/ calibre – that range can be less than the distance a very experienced and accurate airgun shooter can cleanly dispatch suitable pest species. Also, I must add, only when the quarry targeted is static and weather conditions and terrain are conducive to the pellet flying true to the spot aimed for – the kill-zone. Another factor is that shotgun shooters mostly sit quietly (so are already installed with the importance of being patient) in well-built hides, before standing to take a shot (so also used to taking freehand shots) on their quarry when it flies within range.

Additionally, if they’re a rough shooter of rabbits, they already know the importance of stealth, fieldcraft and have trained themselves to have a quick reaction time to assess how much lead to give a moving target. I mention this as the latter I feel is why they understand and adapt more quickly to the trajectory changes a 12 ft/lb airgunner has to allow for; due to range difference from a set zero, angle of fire and if breezy, the importance of being able to judge how much to ‘aim-off’ to combat this.

All these factors first struck home when Graeme, a dedicated, accomplished and experienced shotgunner I’ve known for many years, who also had permission to shoot over the same parcel of land as me, began to slowly take more interest in what I do. At first, I think he thought me mad for the effort I’d put in to bag a few rabbits. Especially when he’d roll up in his 4 X 4, drive straight to a shooting position, unload his hide kit and be set up under a flight line or feeding area. Then, without fail, he’d bag up on woodies and get rid of more crows in a session than I could in a dozen or more!

However, it was due to the fact the rats had become a major nuisance around the farmyard, that his thoughts turned to the months in which he had far fewer quarry species to target on the wing, while sat for hours upon end at the side of a field with little to show for his efforts. The thought of taking up the 12 ft/lb air rifle were reenforced by the times he was leaving empty handed, as I arrived later to be presented with opportunity after opportunity as the light faded into night in and around the farm buildings and barns. Or I’d emerge from the small wood on the land with a tidy bag of quarry as he was passing by on his way to set up his hidden shooting position, only to have little to show for his efforts.

It was after much discussion and him accompanying me one night as I went about rat culling, that he asked if he could borrow one of my air rifles and have a go himself. Little was I to know then just how smitten he’d become and how quickly his forays would equal and sometimes better my own! That last statement is pivotal to this piece, so keep that in mind as I now relate his seemingly effortless transition into becoming a highly skilled and ardent airgun hunter. Incidentally, I feel I must also mention, that due to my extensive armoury and the fact he nearly tried his hand with all I own, he did ‘discover’ for himself what action type, (spring or PCP) and calibre of air rifle best suited his needs.

Now, as a trusted friend, I had no qualms in him using my kit, while I gave advice or just tagged along to see how he was getting on. First trip out, upon watching him handle and shoot an air rifle from the outset, this diehard shotgunner demonstrated his understanding of those factors I mentioned previously pertaining to effective range, power at his disposal and other variables. I watched him place pellets into kill-zone groups at 20 then 30yds in the same session using my 12 ft/lb .177 Daystate Air Ranger. Next up a springer, an Air Arms Pro-Sport in the small calibre – this time (but keeping in mind he was already used to a recoiling gun) he amazed me by dropping woodies from sitty trees. On other occasions, using a selection of PCP’s and springers, he expertly stalked or sniped rabbits and generally hit everything he aimed at!

His shooting skills had been honed from years of shotgunning and transferred over to the discipline of airgun hunting perfectly. In no time he’d purchased his own gun - a preowned, mint condition Weihrauch HW100KT multi-shot PCP. Partly due to his liking of my example and also getting a cracking deal on it plus scope at a local gunshop. Surprisingly, he’d even followed my lead and chosen my favoured hunting calibre of .177. Though in no way had I cajoled him, this was the better option - a subject worth an article in itself! Rather, after trying a selection of my air rifles in both popular calibres, and also after using single-shot mechanical action and multi-shot PCPs, he’d made his own decision as to which suited him best. Quite interestingly, after a good few years enjoying his hunting with a variety of 12 ft/lb air rifles – as if to come full circle he then, and only then got his first FACrated air rifle.