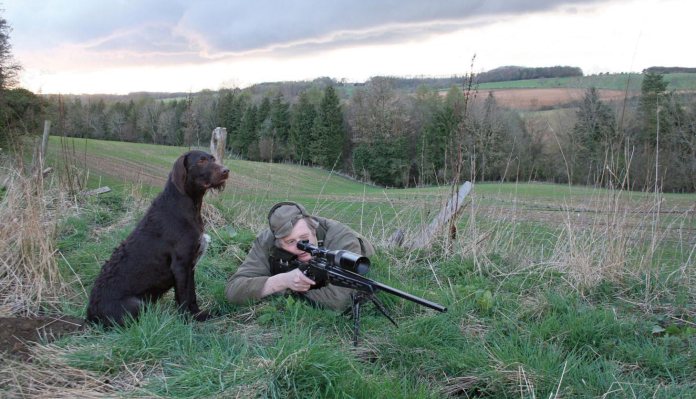 Whilst with my son in Scotland, waiting quietly for a Roe Buck to appear in the unusually hot July weather, he asked me what was the best buck I had shot to date? To me, its more about the stalk, but one beast really stood out, as it was shot with a wildcat I had sorted and with a good friend of mine, so great memories, just like today.

I am sure, that like me many stalkers, each year are itching and just waiting in anticipation until the magical April the 1st hits the calendar, as we deer hunters are of one mind and that is to eagerly stalk the woods after Roe Bucks, as the season begins. Mindful of the bucks that have been watched over the winter months and having made fair assessments to their quality and necessary numbers to cull in this year’s program. It is always a mixture of excitement and regret that some old faces need to be harvested for the better of the general deer population.

However, this is essential, if we are to have a healthy and thriving community; also, it’s nature’s way to always be making way for the next generation and therefore survival of the species. I had a fantastic opportunity to stalk the Cotswold hills outside Cheltenham with professional deer stalker and Custom rifle builder Steve Bowers and I wasted no time in meeting up on the 2nd April, two hours before sunset. Steve manages some of the most beautiful farms and estates on the Cotswold and the scenery is breath-taking, and although I have 30-years roe stalking under my belt, there is always that tingle of excitement and anticipation, the evening did not disappoint.

I was doubly keen to get going, as I had in my hands a new Wildcat cartridge that I had developed and on paper it shot very well but I needed a first blood to prove the ballistics. Steve had done the gunsmithing to my RPA switch barrel rifle and so it was fitting we headed to the wood together. The area to stalk is a patchwork of large arable fields ploughed over this time of year with the emergence of crops sprouting out of others, all interlaced with Cotswold dry stone walls and long, thin but large woodland blocks. Here was Roe and Fallow deer heaven. Plenty of places to mate, nirvana.

Plenty of places to hold up and ruminate during the day and areas of lush grass and shoots to sustain and build up the depleted body mass from the winter months. Due to the remoteness of the area we were to stalk, we would be using Steve’s quad bike equipped with deer carrier to the front and seat for passengers to the rear. When I say seat, a damp square of 24mm ply was for my long-suffering bum, as we bumped over the ploughed furrows with me cradling the rifle and Steve’s dog Willow, a short haired German Pointer, riding in my lap, cosy!

We joked and discussed my new wildcat as we ambled along. I had wanted to develop a cartridge that would be no bigger than a .308 Winchester in length but produce nearly .30-06 ballistics with a powder charge the same as a .308. Sounded fanciful, but I decided to neck down a .458 SOCOM case to .30 calibre as it uses a .308 bolt face/ head and holds 50-grains of powder in a short dumpy profile; perfect for my needs? Necking down had taken 18 differing bushes to reduce the size, then I had to neck turn the brass, as it was too fat and then have the rifle chamber reamer designed to actually cut the RPA’s barrel chamber to my specifications, all throated for a 125-grain Ballistic Tip bullet.

That’s the essence of it, but after Steve had performed his magic with the gunsmithing, I had in my hands a cartridge that would shoot a 125-grain Nosler at 3200 fps with only 44 grains of Vit N133 powder, a really potent package indeed and tonight I was hoping to christen it. By the way, it was to be called the 300 Broad Sword, carrying on my theme with my other wildcat rounds the 6.5 Rapier and 280 Claymore. Our discussion on ballistics and trajectories was interrupted, when the drone of the quad shallowed and Steve hushed; we are close now and we needed to park up and stalk down to the first woodland edge. I usually stalk alone, and it was nice to share the evening’s hunt with a fellow stalker and great host.

We dismounted and slowly stalked towards the brow of the field and peered into the dark woods below. There was still enough daylight penetrating the woods to start the spring growth sprouting from the woodland floor. It was here between the tree canopy of new leaf growth that Steve spotted and Willow indicated were eight feeding Roe. “All does, mate”, Steve whispered and yes, the anal tush was visible on their rears, but we both knew that it was prudent to wait and see if a buck emerged from cover. 25 mins elapsed, and we watched the roe, totally unaware of us, feed slowly through the wood and then hop over the wall into the field below and on to their next banquet.

Keeping 90⁰ to where they had disappeared and still down wind, we slowly picked our way to the next vantage point that opened up to a view of undulating hills, grass fields and a distant woodland edge, each with a small group of deer feeding quietly. It was now 19.00 and the ‘magic time’ when Roe just emerge from nowhere and it was now that the tables were turned on us. Two does were spotted 350 yards off and so Steve indicated a stalk route down and out of sight to emerge on top of a large domed hillock, where we could get a better look. Sure enough, two ladies but no bucks, but as we turned to retrace our steps to our left, no more than 30 yards away was a small buck in velvet and perfect to shoot. But now he knew we were there and the sky line shot was not an option, so we had to watch him trot way, fair play.

It was now getting quite dark and the deer we had seen previously would now be coming back to the original wood where we had spotted them to bed down; so, we decided to intercept them. Steve had brought his trusty 30-06 AK Imp rifle that he cradled across his knees and had up a few times at the odd wandering fox, which we left in case we spooked the deer tonight. Propped up, with our backs against the dry stone wall, we could cover a 500 yard woodland frontage left to right as the deer hopefully would come along a well trodden path. At 19.45, the distinct sound of a Roe buck thrashing a small tree, to remove his winter grown velvet and mark out his territory for the forthcoming rut in July, broke the still evening air. Sure enough, a buck, just the tops of his main beams showing, so we watched some more to assess him correctly, never be in a hurry.

Another swaying branch and more heavy fraying on an overhanging branch with the characteristic scent marking from the Roe’s forehead. “He’s big”, I said, “sure you want this one shot?”. Steve indicated that this was an old boy, although large that actually was going back and sadly was his turn to give up his territory for a more promising young male that Steve had seen on countless occasions Then, as if by magic, he was coming across the plough 100 yards to my left, “safe shot, Potty”, Steve whispered, and I lined up the cross hairs on the buck’s mid brisket, as he was quartering me, so the bullet would penetrate the thorax in line with the top of the heart and lungs. The RPA trigger broke and a 125-grain Nosler struck its mark perfectly and the he literally dropped on the spot

You never really know the age of the deer until you check its body mass, hind quarters and teeth wear; this indeed was an old boy, he had large drooping or roofed coronets with teeth that were worn almost down to nothing. Despite this, his main beams were well pearled and of 30cm length with spectacular front tines of 15cm. Steve had just, with Willow, also successfully stalked a Cotswolds Gold Medal Roe buck and what made it especially special was it was with my own 300 Broad Sword wildcat cartridge in a rifle Steve had made for me. Just then, Jake and I spotted a nice Roe from the woods and we made our own memories, as he dropped to another of Steve’s custom rifles he made for me, my 30-47L Predator. Good hunting