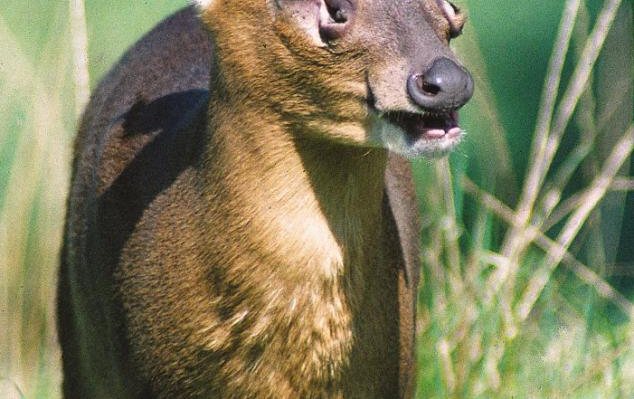 Reeves Muntjac are the smallest of the six species found in the UK, and one of the most recently introduced. They are all descended from a number imported from China in 1894, kept at Woburn Park in Bedfordshire, but deliberate release and escapes from enclosures have led to a feral population. Being well adapted to the UK climate and countryside, their numbers have, in recent years, grown exponentially! The BDS 2016 survey shows that this species to be found across large areas of England except the very south west and south east, to a northerly limit around Leeds.

Standing just 54cm at the shoulder and weighing up to 18kg live, a mature doe can reach around 22lbs (10kg) at the larder (head off, feet removed at the hocks, empty body cavity), a buck up to 28lbs (13kg) dressed, in southern England. Muntjac are highly adaptable, comfortable in both deciduous and coniferous forests, shrubberies and large gardens, in fact anywhere with a diverse understory from which they can browse.

Unlike larger species, they do not cause damage to commercial plantations, but instead can hoover up smaller plants and shrubs when numbers are high, leading to loss of fauna diversity, such as bluebells, primroses, orchids and honeysuckle etc. which brings them into conflict with gardeners and conservationists. Browse height can be some 1m if they stand on their hind legs to reach up or push over saplings, from which they eat the lower leaves. Strong for their size, they will push under sturdy fencing to gain access to young plants and shoots on the other side.

Grey/brown in winter, turning a russet brown in summer, broadside on the deer is higher at the haunch than shoulder, making its outline appear rather hunched. The face is distinctive, having two sets of glands, which are used to mark territories, the most obvious pair (preorbitals) below the eyes.

Both male and female have pronounced black facial lines, diamond-shaped in a doe, straight lines in a V shape to the pedicles on a buck, which also have long, visible canine teeth. The doe’s canines are shorter and do not protrude. These teeth are not ornamental, being used during fights with other bucks for territory. Scarred necks and chunks missing from ears are not unusual.

The antlers are around 10cm long, with an inward pointing tip. Mature bucks develop a short brow tine, which is just some 1cm in length. There is a tail on both sexes, which becomes erect when alarmed. Muntjac emit a loud and distinctive bark, repeated at intervals, both as a warning to other bucks and to attract does. Once first heard, the listener often thinks it’s a dog in the woods. Although bucks are a little larger than does, it is their thick necks, larger heads with canine teeth and of course antlers that sets them apart from the more slender and elegant looking does.

Unlike the other deer species in the UK, there is not a rut period, due to their origin in Asia. There, the warmer climate did not dictate a specific season for birth to maximise survival chances of the young. Instead, the Muntjac doe can be impregnated almost immediately after giving birth, at any time of the year. A single kid, also widely called a fawn, is born after seven months (210 days) gestation. A doe can therefore produce 3 kids every 2 years; these kids can themselves become pregnant at 7 months (if female), so the Muntjac population can rise rapidly. The fawn will have spots along it’s back, which fade after a few months, and will weigh almost as much as an adult at one year of age.

Bucks shed their antlers in May/June, cleaning their velvet in late August or early September.

However, as Muntjac buck kids can be born at any time, they could be in velvet any time of the year. They do, however, cast come the next spring, then follow the yearly cycle. This is a way of identifying the younger muntjac; in velvet between October and June indicates a kid (fawn).

Counting Muntjac in a given area is difficult. They are quite solitary animals, does may be seen with their young, or with a buck, but in no greater numbers. Whereas other species can herd or come out on fields to feed, the Muntjac prefers woodland edges or hedgerows at best, never stopping for long in the open, then spending much time lying up ruminating. Since using a thermal imager, I now appreciate just how close you can pass by numerous muntjac, hidden in the undergrowth, unmoving, but intently watching as you pass by!

There is not a close season for muntjac, as they breed all year. The advice is for does with obvious young to leave alone. Taking the more pregnant does means there will not, by this time, be a dependent fawn. All other species of deer in the UK have a close season for bucks, and it seems anomalous that Muntjac bucks do not, and they could also have one during their antler casting and regrowth period. Perhaps this is so because they have only recently become a sporting quarry in their own right; we shall see. As the stalking scene in the UK matures, perhaps a close season for bucks will emerge. For now, with numbers rapidly rising against a backdrop of new coppices and woodlands being planted countrywide, there appears little appetite for this to happen. Our European and US cousins are very much intrigued by this barking, dog-sized deer, some less knowledgeable even thinking they are a British wind-up like the American Jackelope!