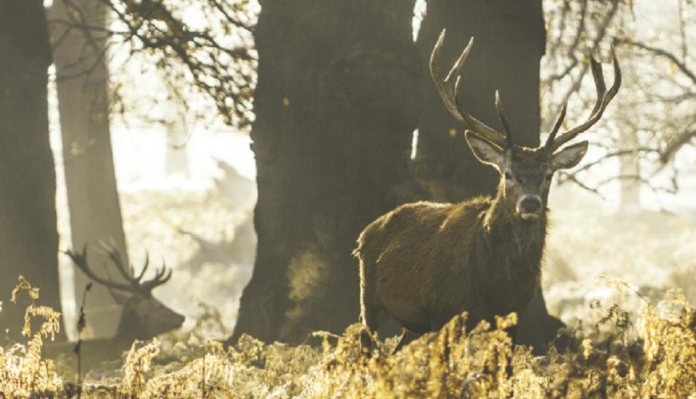 I know some stalkers will disagree, but I must say, I do not know how enjoyable deer stalking can be undertaken without access to a fridge. In summer for example, a stalker shoots a roe buck in late evening. He then has to eviscerate it and find somewhere to hang and cover it with a loose muslin cloth, or similar, to keep the flies away. The next morning he would be obliged to skin and butcher, bag it and put it in a domestic fridge or freezer in smaller joints. The ambient temperature means that the carcass cannot be hung for a number of days, allowing proper setting of the meat.

In winter, things are a little more relaxed, but with the recent mild winters there haven’t been many periods in the south of the country you could leave a carcass hanging for 3 or 4 days without it getting too warm. One of the Estates I stalk on bought the fridge I now use, after my old one (converted from a shop display unit) finally broke down. It has a footprint of one metre square, which I thought was rather small when it arrived, but with 2 rails inside I can hang 7 to 10 deer, depending on species and it has given excellent service. This gives me 3 or 4 stalks before needing to go to the game dealer if I transport the last day’s cull warm, along with the contents of the fridge.

So, as someone previously involved in commercial meat production, I view a fridge as an absolute necessity for the stalker taking more than a couple of deer a year. From the same perspective, I view some carcass preparation methods as undesirable. I have seen numerous times at the game dealer’s fridge carcasses that have been opened all the way through the pelvis or aitch bone. So much good meat is exposed to the atmosphere which then dries and has to be discarded when butchered. What a waste of prime venison!

I am not sure why so many stalkers do this. Possibly to aid the removal of the back passage, but with a little practice it can be easily done by cutting around the anus/vulva and drawn down into the abdominal cavity and out.

Alternatively, perhaps it is thought that opening the pelvis will aid carcass cooling? Deer are relatively small animals when compared to a side of beef, for example - the thickness of meat on a cow carcass far exceeds that of a deer, which doesn’t experience cooling problems. I leave the kidneys in for a similar reason - if removed with the associated fat there is little covering to protect the tender fillets underneath from drying out. The kidneys and fat can be removed just prior to it being butchered, leaving those fillets pristine.

There are a number of different ways to clean the inside of the body after evisceration. One method I’ve witnessed is to have the carcass lying on its back, and tip a half bucket of water inside. The front legs are then lifted so all the dirty water runs out the back passage. Very quick and easy, but hygienically a disaster! The ‘dirty’ end of the carcass - inside the rib cage - containing blood and perhaps a little gut content has now been spread to the rear, where the most expensive cuts of meat are!

Discussions about the gut shot carcass are not numerous, but this is an occasional reality. The bullet can go astray for a variety of reasons, not all to do with poor shooting. In a woodland arena, with the best will in the world, unseen branches can deflect the bullet. Catching a rib can also deflect a light bullet towards the gut, especially if quartering on to the stalker as they take the shot. (If the poor shot ends up in the spine, then you are going to lose some meat, but I’m not discussing that here, as it doesn’t have a big impact on the lardering process).

However it happens, the gut shot carcass needs some careful attention and whatever is done is making the best of an undesirable situation. Firstly, if there are other cleanly shot deer to larder, these should be attended to first to avoid cross contamination. The back legs of the poorly shot deer should be removed, the brisket sawn, and then hung up. Doing this means gravity takes any contaminating fluids down and away from the haunches. The back passage is then freed from the outside.

In general, instead of opening the abdominal cavity with a central, vertical cut, it’s often better to remove the soft belly in two semicircular cuts, each ending on top of the ribs. This gives a wide, open area to work inside. The back passage is drawn down and the intestines, stomach, liver and spleen are eased downwards and out into a receptacle below, removing the flap of hide and skin at the same time. Further skin and hide removal may be necessary if there is a green coating, along with the flanks, kidneys and even fillets, but better to cut rather than squirt water as discussed above, whilst keeping hands and knife clean. If the bullet channel has passed either from or into the lung area, allowing gut content into this cavity, the diaphragm should be cut close to the ribcage and the pluck removed at the same time, as one organ mass. A lot of minor tissue may be lost, but the backstraps (as the Americans descriptively call them) and haunches or legs will be useable.

In summary, with the gut shot deer, better to remove everything internal that looks contaminated, down and out. The mesenteric lymph nodes, liver and lungs can then be inspected separately, away from the carcass without causing further issues. Trimming and gentle washing completes as much as can be done before putting in the chiller.