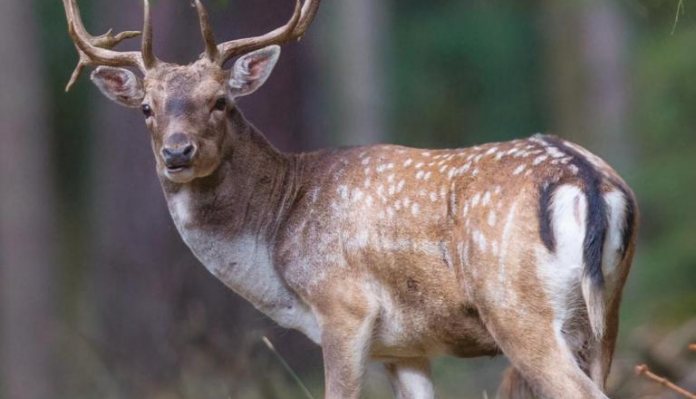 Part of my stalking permissions cover three small woods, which hold Fallow and Muntjac. I have a battle each time to shoot this area, as there are so many ways the deer can run if (when!) I’m spotted. A rifle in a cunning location has rarely, in the 20 years I’ve tried, been completely successful.

There are two bridleways, a footpath, a road that snakes around two of the woods and some nearby houses to be taken into consideration, so not the easiest of stalking! However, there are many Fallow out in the fields at dawn and dusk, which then take to the woods for cover. It is a productive area and luckily not as flat as it looks on my sketch, or it would be nearly impossible to stalk safely!

The prevailing wind is the westerly, with which we are all familiar, so stalking usually starts from the parked truck as the wind is then in my face. The first wood dips down sharply to the bridleway, which I must be mindful of, hence why I stalk down the road side of the first wood. A shot will then only be directed through the trees and the rising field beyond, parallel to the bridleway. The wood was cleared using the continuous cover method about 14 years ago, leaving some oak, beech and chestnut. However, the new growth is scrappy, with hazel and much lonicera in the centre. Deer like to lie up here, making stalking progress slow, constantly looking for a telltale ear or tail through the branches. Of course, a hand-held thermal helps enormously, but even then, it only takes a single step sideways to reveal or lose a heat source, as the cover is so thick.

Often deer clock me before I can line up for a shot. They either run down to the bridleway and up to either wood on the other side, or straight out into the field, where the Fallow bunch before disappearing. Where to put a standing rifle? A gun opposite, near wood two, risks disturbing the deer in that area before you’ve had a chance to stalk it. Over the years, I’ve found that it sometimes works to slowly push wood one through, with a walking gun lagging well behind at the edge of the field. Any disturbed deer not bolting out to the field will run to wood two.

The second wood rises rapidly to the centre, then falls away steeply to the house behind, which provides a good backstop following the route shown. There are many windblown trees and un-coppiced hazel, so a good area for both Muntjac and Fallow.

A deer shot here will cause the others lying up to run, sometimes to wood three, but mostly will go down to the bridleway, across a fenced hedge and up to wood one. A rifle stood at point ‘A’ can cover deer coming from the first and second woods, and sometimes get a shot across the bridleway (20m below) to the field between woods two and three, if the deer pause! They may do this if a mature doe is shot, the yearlings and fawns sometimes hesitant to leave their fallen older comrade. It’s amazing how often they will be sky lined although, deer have a knack of doing this so, in crowded southern England, the shot is off!

To stalk wood 3, the standing rifle will take a broad sweep around it to sit in the high seat, while the area is pushed through. Bearing in mind the bridleway running along the edge of this wood is fenced and has a high, thick hedgerow, it’s surprising that deer prefer to exit this way as often, as the easier way out the top of the open wood into the field in front of the high seat. We’ve often stalked in this manner, seeing no Fallow, only to glimpse them leaving the area via the field to the south.

An advantage of shooting from specific points, either the corner of the wood or the high seat, is all distances are known in advance. Midway up the field between woods two and three is 165m from the corner of wood one, the furthest point from the high seat is 191m, so all points are dead on aim with a 150m zero, 1.5” high at 100m, 2” low at 200m.

One chance a day

I do not shoot these woods again later in the day, as experience has shown Fallow do not return for around a week after being thoroughly stalked. There is a larger wood relatively nearby, which can comfortably hold them, from where they can feed on the mainly grass fields.

Any deer shot is easy to pick up later, as the truck can be driven along the bridleway, and the animal dragged downhill to it. A large Fallow doe on my patch weighs around 100 lbs before evisceration, so I really appreciate not having to drag uphill!

Perhaps it would take five or six stalkers to shoot the three woods effectively and covering every escape route. However, Fallow have a sixth sense and with so many rifles creeping about, I’m sure they would get spooked and leave the area en-mass. Two stalkers, being quieter and less visible, may get better results over time, even if some animals escape. There’s always another day to stalk and luckily the next person stalking the area will be me, so no pressure!