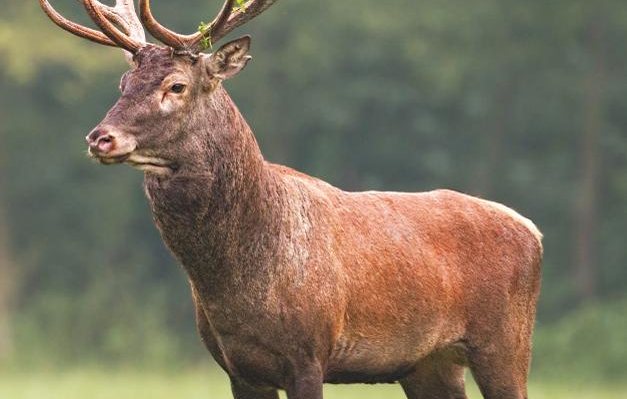 The red deer is one of two native species in the UK (along with Roe), having migrated from Europe 11000 years ago. They thrived in the then forested and sparsely populated Isles for some 4000 years. Since that time, it has not always had an easy time here. From c.4000 to 2500 BC, the gradual rise in settlements and areas cleared for farming made for an ever-declining red population.

The Normans, from 1066, kept deer parks and forests specifically for hunting for 100 years, but after that brief high, red numbers declined further during the late Medieval period. The population was confined to the Scottish Highlands, the South West of England and a few other smaller pockets. In the 19th century, efforts were made to re-establish the red, by cross breeding with the larger Wapiti and introducing the species into other areas. In the late 20th century, increasing areas of forest countrywide has been a boon to red deer, which are now expanding in numbers and range, due to the under-culling of does and the colonising of large plantations north of the Scottish border.

The red is the largest deer in the UK, standing up to 137cm at the shoulder, 122cm for females. Weights for a strong stag would be around 180kg (400lbs) and 120kg (260lbs) for hinds in southern England. Hill reds in Scotland are smaller, due to harsher conditions and poorer feeding, being some 90kg and 65kg respectively. Back at the larder, a good southern stag will be around 95kg (210lbs) in the skin, a hind around 60kg (130lbs).

The red prefers the forests and woodland in England and southern Scotland but is readily adapted to hill and open moorland. This species will eat dwarf shrubs, grasses, heather, tree shoots and agricultural crops, which puts them in conflict with farmers and foresters. Big animals, they can eat a lot, so cause considerable damage.

Colour is, unsurprisingly, a reddish brown in summer, fading to a grey brown in winter. They do not have spots as mature animals, calves lose theirs by eight months; the rump patch is creamy in colour, extending up and over the back. It’s not outlined by a black line as in the Fallow or some Sika. They stay in single sex herds until the rut, when the stag will typically roar to assert his position; hinds emit a deep bark when alarmed, but moo in a somewhat cow-like manner when looking for their calves, which bleat back. Stags grow a mane come autumn, which is kept over winter, mature examples can have huge sets of antlers at their peak of maturity.

The rut starts at the end of September, continuing through to November. Mature stags leave their single sex groups to seek and defend a group of hinds, typically 10 to 15 in number, but occasionally many more. Defending from other stags is achieved by roaring contests, parallel walking and the locking of antlers. After a gestation of 240 - 262 days, a single calf, (occasionally twins) is born from mid-May with peak births in the first two weeks of June. Weaned at four months, but may suckle for longer, woodland hinds can breed at 16 months, but hill reds do not mature so quickly, being initially fertile at just over 2 or 3 years of age. Further, hill hinds may not produce a calf every year, as their better fed cousins in the south will. A mature hind that doesn’t produce a calf is called a yeld.

Red stags are prized for their antlers, which will reach their peak at between 8 to 12 years old. A calf’s pedicles will develop during the first winter. The yearling will then grow bony knobs over the following summer, perhaps long spikes if the feeding is good, clean of velvet by September. In lowlands or South West England, bigger heads on yearlings are not uncommon. The older stags cast, regrow and are clean of velvet (in ‘hard horn’) prior to the younger animals.

The antlers develop each year to a peak of a classic ‘Royal’, which has 6-points on each antler, made up of brow, bey and trey tines with a ‘crown’ of 3-points at the top. Park or woodland deer, fed well and unstressed, may have many more than this. Thereafter, the older stag will have successively lesser heads, the lower portion carrying less weight, the points shorter and spindlier, collectively termed ‘going back’. Sometimes a stag may not grow antlers at all. Possibly due to poor nutrition just as the pedicles were developing, there is then no base from which they can grow. Called a hummel and normal in all other respects, the animal is fertile, and the characteristic is not passed on to offspring.

Red deer will interbreed with Sika, being closely related to this Asiatic species. Zoologists are concerned for the genetic integrity of the red; many think that there are very few, if any, pure animals in mainland UK now. First generation red/sika hybrids have the appearance of both, but subsequent descendants take the dominant parent’s appearance. This may take the form of a bey tine on a seemingly Sika stag (dominant Sika, Red cross) or a white gland on the back leg of a red, indicating a dominantly red deer but with some Sika in its genetic makeup.

Culling for sport or management brings income to the Scottish low and highlands, an estimated annual cull of c.70,000 has not prevented a population increase with an estimated 360,000 in Great Britain and c.4000 in Ireland. The open season for hinds in England, Wales and N. Ireland is from 1st November to 31st March, Stags 1st August to 30th April. Scotland has an earlier and shorter season for hinds, 21st October to Feb 15th. Scottish stags may be taken 1st July to 20th October only.

These dates, as with most other UK deer, follow the yearly doe cycle, closed in late pregnancy until the calves are independent. Stags are in season when the antlers are clean of velvet, so sporting considerations rule here. However, after the rut, the red stag may well be in poor condition, having expended much energy and not eaten for some time, so not good for the table, which ties in with the Scottish stag close season.