Look Down And Around 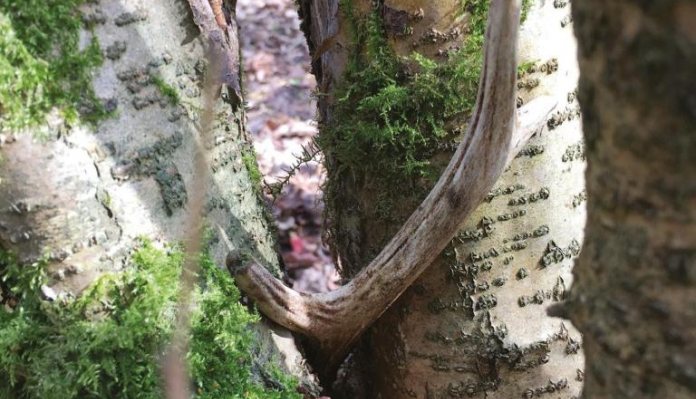 Back in March, I was dragging a young fallow buck I’d shot, uphill to a point where I could load it into my truck. It was hard work and I had to stop frequently to puff and blow. During one of these stops I was looking around, leaning on my sticks, when I saw a roe buck skull not 4 ft from me. It was jammed in a hazel tree, about a foot from the ground.

I went over and tugged; it was moveable, but would not come free, no matter how hard I twisted and turned the head. On closer inspection, some of the points had rubbed and scored the bark in a desperate attempt to get away. This was a buck that had got caught between the stems while cleaning his antlers and couldn’t get free!

To confirm, after taking a few pictures, I scraped the leaves back and found bones scattered around, obviously belonging to the unfortunate animal. I wondered how long the buck had survived while caught - a few days? A week? Alternatively, perhaps he had flailed around and broken his neck after a few minutes. There was no evidence either way. I also wondered how frequently this happened, if at all, as there are a good many bendy hazels around for roe bucks to clean their antlers of velvet on.

I had trodden this route many times before. It gave me good visual access into the surrounding valley - but that was the point - I had previously been concentrating so much on the possibility of fallow 80 to 100 metres ahead, I had completely missed the buck. Perhaps I had stalked near the head when it was still attached to its body. Had I not stopped for a breather I would never have seen it. It made me wonder what else I have missed over the years, by always looking to the middle distance. I will in future look down and around more often, and not just to avoid dry twigs and leaves!

To further illustrate what strange things can happen to animals, after I had told my story to the Editor (Pete Moore) he told me of something similar. It was in the fallow rut and he got a call from the land owner saying there were two dead bucks in one of his fields and could he get rid of them? A bit off but no problems; however, when he got there, the full tragedy was revealed! The two bucks were on the ground locked together by their antlers, like they had been fighting. Closer examination showed that they had been battling for dominance, as male deer do in the rut, but one had got some orange bailing twine caught around its antlers.

Typically, they clash antlers and push and pull at each other until the weaker one gives up and exits. But in this case, it was not possible, as the twine locked them together. Pete said they’d been dead for probably four days and he could imagine their agony as they could not disengage, so they slowly starved and dehydrated to death. He admitted: “I did not get a photo, as it was one of those rare occasions I did not have a camera with me!” But in both cases it does not bear thinking about, as those deer slowly declined in such a horrific manner!