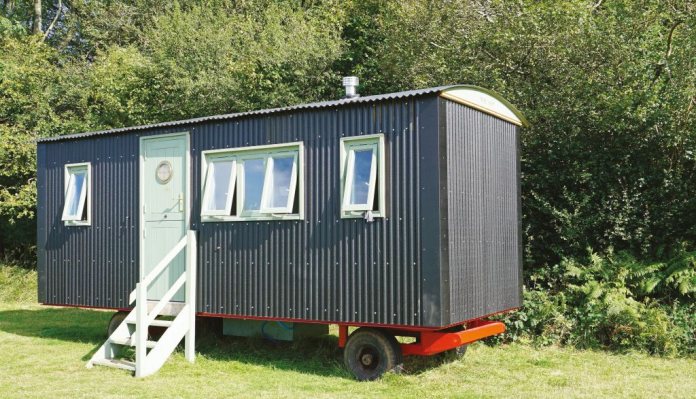 Deer stalking can come in many guises; one can book a professional and enjoy his hospitality, ranging from a B&B up to a more palatial lodge. At the other end of the scale, my own set up is mainly solitary, being the only stalker on the land, with guest hunters helping when invited or needed. This limits the equipment I have on my ground to some nine permanent high seats and a deer fridge in a container I rent not far away. It’s a case of arrive, stalk, deal with the carcasses and home.

However, upscale just a little and a syndicate of stalkers can have a much more sociable time. A friend of mine runs such a group, which, aside from the main job of stalking the woodland and fields at their permission in Gloucestershire, has a purpose-built stalkers hut on site. This has changed the dynamics of their operations.

Between the morning and the afternoon stalk, they can repair to the hut, discussing the morning’s events and what the plan will be for later over breakfast or a lunch. Of course, one could tow an inexpensive old caravan across the fields, park it up and use that as a temporary base, which is often the case. But caravans quickly deteriorate and become damp, never drying out when used Snug as a bug, Smaller hut in winter perhaps just once a week for a day’s stalking, unless using a continually running mains dehumidifier. The syndicate wanted something much longer lasting, comfortable and useful.

The hut was professionally built at the workshop of one of the members, Kevin Bateman, a bespoke joiner by trade based in Wickwar, 10 miles north of Bristol. He had an order for a smaller hut for a client’s family and thought why not make two, one for them and the second ourselves? This was used for a few years, but they hankered for a larger set up, this one being 20 ft by 8 ft. The right chassis came along, which was shot blasted and painted. Then Kevin started work with Derek Clifford, putting the design knowledge gained from the smaller, original hut into the build of this one.

Snug as a bug

Constructed around a strong wooden framework, exactly as a timber framed house would be, the internal walls are boarded, covering three inches of insulation in the floor, walls and ceiling. Half inch ply over the frame gives rigidity, a waterproof membrane is attached, battens cover this to give the necessary air gap before the metal cladding is screwed to the exterior, which completes the serious build quality of the hut. This top specification ensures that it will not become too hot in the summer or require much heat in the winter to keep it comfortable. Condensation will not be an issue!

A solar panel on the roof keeps the batteries charged for the LED lighting and the all-important, USB charging points! A mains hook up for a generator is built in, if required at some stage, with a couple of 240v 3-pin sockets internally. A gas bottle operates the fridge and boiler, giving instant hot water for the sink. Water is tee’d off the potable supply before it reaches a nearby horse trough; so, apart from this, the unit is completely independent. If mains water was not available, a 50l rolling camping container could be hooked up as a supply for cooking and washing up.

A cassette loo and small wood burning stove rounds off the amenities. While the toilet room could have easily had a shower incorporated as a wet room arrangement, it was decided this wasn’t necessary. Two single beds double up as sofas for use while waiting for the appointed chef of the day to make tea and fry breakfast!

In use, the syndicate have found that for early starts, it works well with two sleeping comfortably overnight in the hut. No vehicle engines or slamming doors alert nearby deer at first light, they just quietly open the door and slip out, rifle in hand. This has led to better success at the start of the Fallow buck season in August than in previous years. Operating separately in the woods adjacent to the hut has enabled some nine Fallow spikers and five muntjac to be taken in just a few weeks. The winter doe cull from November looks to be easily achievable.

I joined this happy bunch on a break from a Saturday morning zeroing session. Their range, conveniently situated in a small valley which protects against noise pollution, is a few minutes’ drive from the hut. A couple of hours leisurely checking home loads and bullet drop at longer distances of up to 300m and the guys were ready for a pause to let the rifles cool completely before a final few shots.

We were joined by the Estate keeper, who seems to know the right moment to arrive for a brew between tending his poults at this busy time of the year. A friendly chat and a little banter keeps everyone on side, it’s not always the case that stalkers and game keepers see eye to eye! I was struck by the central role played by the hut; it would be a much different syndicate if everyone had to meet in a yard. A quick look at a map on the bonnet of a vehicle and maybe a swig of coffee from a flask then off to stalk.

I know which I prefer and have already made enquiries to my landowner about siting a somewhat smaller version from Kevin on their land. It will contain just a sink, cooker and sofa bed but if I get the green light, it will change how I stalk for the better. Keeping up one’s concentration for a whole day’s stalking in winter is nigh on impossible, but with a hut it could be broken up nicely and, if it rains, I could hole up comfortably until it passes!