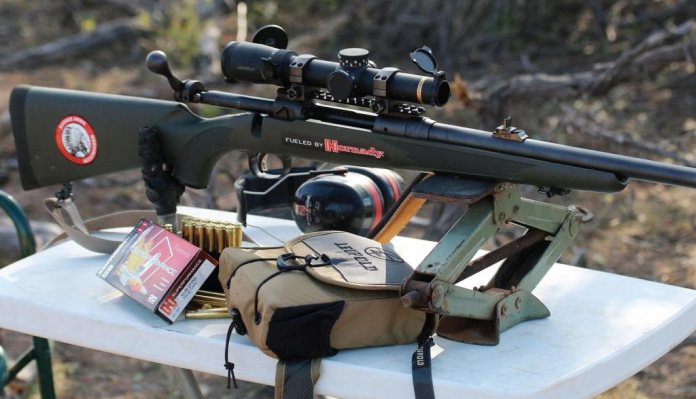 There is a highly dangerous disease for us hunters, a particularly bad fever. It is not possible to vaccinate or otherwise protect against it. There is no medicine and no medical help. It’s The hunting fever. It meets one in the local territory or on a trip abroad. I have been plagued by my first trip to Africa and since then this disease and this continent has not let go. The only sensible therapy that remains for me is to travel again and again. Of course, it doesn’t get any better, but it alleviates the symptoms of longing until next time.

Why is this actually so?

Living in a northern German, low-game district, I love to hunt it along the dykes and hedges for duck, hare and pheasant. The sunrise of the hunt is a highlight of the year, in addition to the sociable driven hunts in autumn, but it is not comparable with experienced adventures on the dark continent. The many different game species, the proximity to nature, the sunrises, the climate and the so strange for us Europeans all this makes the attraction of this part of the land.

When the yearning is once again difficult to withstand, it logically goes south again, this time Namibia. My friend and guide Divan Labuschagne expected me already in Windhoek at the airport and after short customs formalities, because of my rifle, we went by pickup to the farm. Already on the way there we discover wild Oryx and even Kudus browsing only a few meters away from the asphalt and immediately memories of the last hunts come up. It had already worked on mature Oryx bulls in the past, but a Kudu has always remained only a dream. I like to compare this game with our European Red deer. With his massive body and mighty, spiral horns, he is, for me, the king of antelopes, will it be possible to hunt him this time?

After an interesting ride over dusty terrain, we reach the area of DL Safaris. It is a classic farm with free-roaming cattle, sheep and horses and only small pasture fences keep the cattle together. Contrary to the common opinion, they are often not fenced gates but huge areas without high barriers. The cultivation of these plots of land also attracts the local game and 25,000 hectares of hunting area are not uncommon. Often the areas to hunt over are much larger.

Having arrived at the farmhouse, the joy of seeing it again after a year away is huge. There is a lot to tell, and a lot of new things are reported from both sides at lunch. Of course, the first plans for the upcoming hunting days are also forged. As you already now understand, it is my greatest desire to get a Kudu. Divan already knows this and shows me desert pictures from wildlife cameras, and in addition to Oryx, Gnu and Jackal, there are many Kudus to marvel at. An old bull is particularly noticeable to me and together we decide to take him on. We shall see who has the luck!

It’s still dark when I wake up the next morning, but I don’t want to miss one of Africa’s most spectacular natural spectacles; sunrise! It is a sea of colours; orange, violet, blue, yellow and the many shades make the sky literally explode and the rising sun quickly sees off the cool night. The coffee, heated in the boiler by the campfire, goes down like oil and banishes the last tired spirits.

Since time is always precious, we start directly with the preparations. Of course, a check zero after my journey is obligatory and for this trip chose my Savage Hog Hunter in 30.06. Of course, you can also borrow a gun on the farm, but my rifle has often accompanied me faithfully and its safe handling has long since become instinctive.

After a few shots, and small corrections on the Leupold VX6 scope, all the hits are all in black and the hunt can begin.

Sitting on the back of the pickup truck, we drive directly from the shooting track to the station and the wind blows mightily around the ears. A wind that could cause us problems on the stalking because it is constantly changing direction often makes it impossible to get close to the game. For this reason, we first concentrate on the tracks on the ground and try to find the bull’s level. I have to admit, unfortunately, the countless animal tracks can hardly be distinguished from each other. Divan and Jonny, the tracker of my guide, however, soon point to the traces of an old bull and presumes it’s the one I’m after. However, it does not make sense to follow in this wind, so we conclude and agree to resume the track the next day.

Fortunately, the next morning the wind had abated, and I hope to have more success. Boots laced and up on the pickup we go off road and look for the changes from the previous day. Meanwhile, and with a little pride I discovered, fresh impressions in the sand, which could be my bull. As quietly as possible we follow the found track through the dense thorns and many times it is not so easy to get rid of them again.

Like the tentacles of an octopus, the bushes tug at our clothes. Unbelievable how Divan and Jonny meander through without a scratch and I get hung up all the time. Suddenly both freeze and Divan points slowly to a small hill. Through my glass I can see why, about 400m away is a Kudu bull foraging. It’s the strong, capital, old bull I already know from the game camera footage. Now it gets serious, act cautiously, do not rush and keep as quiet as possible and above all, get a grip on the hunting fever. This is my opportunity.

Every stalk is about getting as close as possible to the game and Divan knows my passion. What can be more exciting for a hunter than to get up to a few meters? All the instincts are awakened and stooping like Red Indians, we sneak up, taking advantage of the terrain, getting closer. It’s not an easy task, but it’s all part of the joy of hunting. Again, and again we remain behind bushes and orient ourselves anew. We’re getting closer, and now it’s no more than 50m to the copse he’s in. From here, however, he’s obscured by dense scrub and we have to turn it around to get into a better position. Now we ghost walk, every little noise would betray us and destroy the stalking. We carefully move step by step and approach a good shooting position.

That can’t be true!

It is less than 30 steps to the place where we could see the Kudu. The problem is: now we don’t see him anymore! But he must be there! If he had jumped off, we would definitely see him and also hear him running. Apparently, he had finished his breakfast and has gone down into the shelter of the bushes. Quietly my guide whispers in my ear, he wants to throw a stone in the presumed direction and I should hold myself ready.

I like to use a low magnification variable scope for such game drives and am happy to have kept it this time too. I dial down the Leupold to 1x magnification and switch on the illumination, ready and very excited, I nod to my hunting guide.

Just at the moment, when Divan stoops to pick up a stone, the imposing Kudu runs right in front of us. If I had experienced something like this for the first time in my life, I don’t know if I could have shot. So impressive, powerful and outstanding, he is right in front of us. The wild body fills almost the complete scope, but luckily, I was prepared for it and pull the trigger on the fly as I track him through the lens without further thinking.

“Perfect shot!” murmurs Divan and knocks me vigorously on the shoulder. I can’t believe it yet, and I only now feel how fast my heart beats, how sweaty my hands are. Spellbound we follow the short death flight of the Kudu and see how he goes to the ground after 50m and we let him die, before approaching.

As in a trance, I hear Divan say: “waidman’s salvation my friend” when we arrive at the track. A dream has been fulfilled. There he is in front of me like I’d always imagined. The stripes in the fur, the ear, everything. I need some time to process everything. Everything is perfectly successful. The Hornady Superformance ammo had done an excellent job. I recall all the preparations and hardships of these and also previous trips, but in the next moment they are forgotten again, and it only counts the just experienced. Now, do you know why I’m suffering from this fever?