Hunting or Story: Hotter or Better 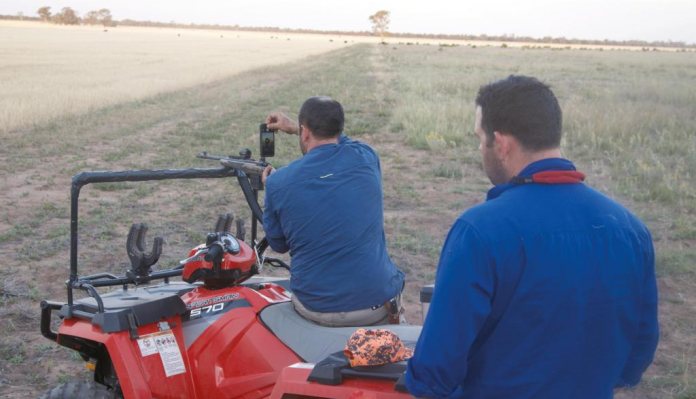 I’m sometimes asked by British friends, what’s hunting like in Australia? That’s a big question! However, for anyone wanting to look a little further afield, this will give some idea, and maybe a place to start. I think it was Ian Botham who once said: “Australians are very much like their country, big and empty.” He was kind of right. Google says Europe has a land mass of 10.18 million Km2 and a population of 741 million. Australia offers 7.69 million km2 and 24.6 million people. So, what’s the hunting like, kind of like Europe, but a bit hotter. It’s difficult to summarise easily; so, let’s look deeper.

While Australia is known for its unique wildlife, recreational hunting of its native species is not really an option, so, what’s on the menu? Strangely enough, it’s mainly animals that most British hunters are familiar with. These are the introduced species, brought here for various reasons that have flourished, and in many cases put the existence of native wildlife at risk. The hunting of introduced species, with some exceptions, is not governed by any season, or bag limit. Therefore, quality of individual animals varies greatly, even within a species. At some time in Australia’s European history, Rabbits, Hares and Foxes were introduced and bred like crazy. All are readily hunted around the country with shotguns and smaller calibres rifles, such as rimfires and the many .22 variants.

As a hunter, my specialty is deer, goat and pig and I spend a great deal of time pursuing them.

Australia has six recognised deer species; Fallow, Red, Sambar, Chital, Rusa and Hog. While most readers would be familiar with Fallow and Red, the Asiatics may be a surprise.

Sambar, Chital, Rusa and Hog are all Asian with bloodlines stretching from Indonesia, the South Pacific to India. Sambar are wide spread in SE Australia where a tradition of deer hunting is firmly entrenched. They are big and provide great sport. Axis, or Chital as they are known, have a home range in the North East. While sharing a similar geographic heritage to Sambar, they are a very different, being smaller with different colouration and antler shape.

Rusa are more closely linked with the South Pacific and Indonesia than India and are present across the East Coast. Hog, however, are a true specialty. Another Asiatic species, they are Muntjac-like in size and weight. Australia has one of the few, if the only, pubic land hunting opportunities for them in the world. Heavily regulated via a ballot system they, for the keen hunter, Hog Deer are possibly the pinnacle species.

Most deer are hunted with rifle or bow following a stalking approach, except for Victoria, here regulated hound hunting is also allowed. They are approved to drive Sambar, but cannot physically hold or engage, so consequently the deer are shot at the end of the drive.

Goat are abundant, their progeny, once farming livestock, they are highly adaptive and frequent breeders. In terms of bloodlines, don’t even bother, identifying the variations you’ll see in even a small mob would prove a challenge for even the keenest of hunter. They are generally hunted with rifle and bow.

Pigs, or boar are a very popular quarry and are again the offspring of once domesticated animals. Found throughout the country, there are certainly hot spots with the North of the country producing the best. While hunted with rifle and bow, dogs are used to pursue and engage, for dispatch with a knife, which is a popular method.

At this point, is worth mentioning calibres. The regulation of hunting is heavily dependent on the relevant State jurisdiction. Regulation varies from essentially none, to a high-level, for instance regarding Hog Deer.

Consequently, calibre choice is either mandated, suggested, or not considered. All this does is produce the inevitable argument of best calibre. While some prefer a hand cannon, others feel .223 and the like are enough. My preferred choice for deer, goat and pig is 308 and 30-06. Both give good killing power, while also over subscribing on any potential regulatory requirement or advisory standard.

Australia also offers the opportunity to hunt some truly big game. Asiatic Water Buffalo more commonly referred as buff, the elusive Banteng and wild, or scrub bulls. Predominately found in the Far North, Asiatic Water Buffalo have a considerable range across the Top End. Buff are big, bad and take a lot of stopping. Consequently, they are regarded as a true game species. There are several opportunities to hunt buffalo, although the vast majority are through private access or dedicated outfitters.

Banteng on the other hand are far less common. Essentially an Asiatic bovine and were brought to Far North in the 1800s as an experimental substitute to European cattle. Escaping domestication, they now survive in the wild. Known for the elusive behaviour, and at times, belligerent temperament, Australia provides a unique opportunity to hunt Banteng. However, they are very much a specialty species and require considerable time, effort and resources to make it happen.

Scrub bulls are a little different. Generally, they are a wild, unbranded variant of a domesticated bull and exist wherever there are cattle. However, your best change is in the North, and Far North. They can be wild and getting charged is a real possibility. If you are considering hunting Big Game in Australia, consider a suitable calibre, such at the 375 H&H, the 9.3 x62mm or 375 Ruger

Australia also has many wing shooting opportunities. With a true duck season in the South, some other states provide limited opportunity for Duck, Geese, Quail and Pheasant.

While confined to private hunting properties, or ranches, there are several exotic species available, at an appropriate cost. The variation is enormous and solely dependent on the individual hunting ranch. About 3 hours North of my home, African Blackbuck are available to the discerning hunter.

The critical component to hunting is access to game and in Australia is multi-facetted, and dependant on location. Fundamentally there is three types; public land, private property and via dedicated hunting services.

Public land access is NOT available across all the country. Unfortunately, some states are far less sympathetic to hunters than others. The two best are New South Wales and Victoria. Victoria has the easiest method of access to public hunting, while New South Wales probably has a greater level of diversity in public land hunting opportunities. Either way, both provide ample opportunity. I have hunted public land in New South Wales for over 10 years, and there are plenty of places I’ve yet to go and a lot more game to take.

Knowing someone ‘with a bit of dirt’ is a great way to gain access, and for many people, private property is a fair representation of their hunting experience. However, as it is private, unless you have permission then it’s not an option. You could try asking for permission (door knocking), although you need to be prepared to travel many a kilometre, and develop a resistance to being informed politely, or otherwise, no.

There are a number of dedicated hunting outfitters across the country, who provide access through commercial arrangements with private land holders, and in some instances their own land. Services range from very high end, to knock about safaris.

My personal experiences range from the terrible, to the terrific. Like anything, you are buying a service, so it pays to ensure that you are getting what you paid for.

Depending on the outfitter, you may very well have a guide, access to a vehicle, hunting accommodation, a catered meals and drinks. In other instances, you may receive the same level of service, however accommodation might be a semi-permanent tent, cabin or similar arrangement. On private land, you might very well stay in the farmhouse, or other quarters such as the sheep shearing shed, a bunk house or your own tent close to some of the amenities.

However, for many, myself included, hunting is very much a DIY experience. Camp life again varies from location to location, however it’s always a good idea to ensure that you take everything with you, as there may be nothing other than a flat patch of dirt for your tent. This method gives you a real safari experience, even on a budget. Of course, you need all the gear, however once accumulated you are self-sufficient, so then it’s all just a matter of making it all happen.

Typically, the Australian hunting experience varies wildly. However, there is most certainly one constant, that is travel. If you don’t live near prime locations, or if you do not have access, you’ll very likely have to travel. The best arrangement I’ve ever had was two hours from home, however generally for me it’s between 3 and 8 one way. This, of course, extends the time required to go hunting.