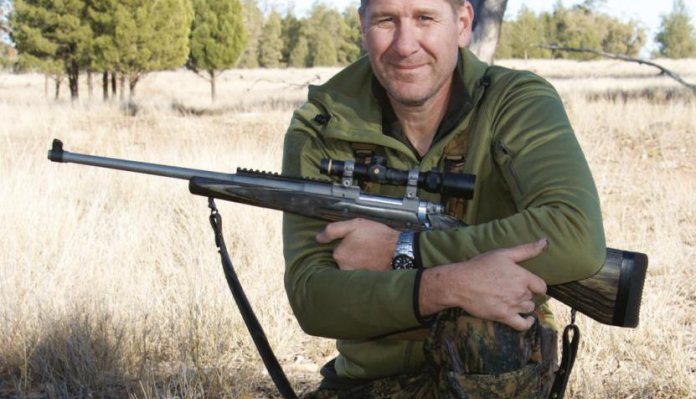 Pigs, hogs, grunters, call them what you will, it’s all just names for hairy, angry bacon. Asian, European or mixed lineage, wild boar is regarded the world over for its qualities as a game animal. In Australia, pigs are often referred to as feral, due to their connection with domesticated stock. However, the vast majority of those found in the bush are wild born, with thick hair, heavy bodies, and at times large tusks or hooks.

Crafty, resilient, mean and apparently bullet proof, or at the least resistant, I hunt them every chance I get. With that in mind, Tim and I headed three hours west from Brisbane, crossing the Great Dividing Range to seek our quarry on the Darling Downs, which is a natural location for pigs. This would be a guided hunt, something Tim and I have only limited experience with. We usually hunt public land and follow a self-guided approach, so it was pleasant change to enjoy all the amenities of a dedicated hunting lodge.

I had packed my Ruger Gunsite Scout in .308 Win. Its shorter barrel means it tends to bark a bit; however, it points well and shoots straight. I matched it with a low power Leupold scope and Federal 150-grain soft points. Tim’s outfit was his Tikka T3 in the hard-hitting 30-06, more than capable of taking whatever came along.

It was still the tail end of winter, so we were in for cool mornings, and mild days. On the ground, we were in drought with everything looking dry, and dusty, so hunting would revolve around the available water. First thing Saturday we headed out to the range to check our zeros and allow our guide/host Jim, to get a look at your shooting skills. With everything OK, we had breakfast. As a dedicated hunting property, we observed an abundance of game, however our quarry was, as always, a little more elusive.

We headed out with Tim taking the number one gun position for the day, which meant I would carry the camera, and sling my rifle just in case back up was needed.

Moving through a dry paddock, we eventually came to a rocky creek crossing. It was mostly dry, and we could clearly see tracks in its sandy bed. As we climbed back out, there were short legged, black blobs moving through the dry grass and over towards the trees. There were only a couple, but that meant more, so we continued, as Jim had a feeling where they were heading.

About 10 minutes later, we were walking in single file, following a well-used game trail towards one of the better dams. Up front we saw the spotted Red Deer as they cut our path. The deer, all hinds were in good shape, though a little dusty. They were holding up a little way back from the dam amongst the trees. On seeing the Reds, Jim told Tim to get ready, explaining that in drought, it’s a numbers game, where the Reds and pigs push each other off the dam. If they were away from the water, it meant there were enough pigs about to do so.

Coming over a slight rise, Jim was right on the money. There they were; piglets, larger sows and boars, in a multitude of colours. Tim took a standing rest on a tree, while I started taking photos. With his focus, and that of the camera on a good-sized boar almost directly in front we initially didn’t get a true understanding of how many pigs were about, with close to 20 up front, and about 30 below and further to the right. The shot, that threaded through the Reds, was good and knocked the boar down for the count. It also sent the remaining pigs to all points of the compass and they hightailed it away. Strangely, the deer didn’t seem all that startled, with Jim saying, Tim had just gifted them the water.

The boar was certainly a good one and as Tim and I took some photos, Jim backtracked to the vehicle. With a good pig already on the ground, we decided to check out a couple more locations. Once a sheep grazing property, Jim decided to de-stock and create a hunting lodge with a good balance of paddock, plain and heavily covered timber. All of which provided both feed and shelter for the game.

As the day progressed, the game slowed right down, so we waited for the sun to slowly dip down to the West before heading out again. With Tim already managing to get a boar, it was time to fill the freezer. Approaching another dam, we spotted a small black and white pig that certainly looked like a good eater. Taking aim, Tim was again on target and we soon had number two for the day. Truth be told, even a well-placed shot from a .30-06 meant that there was some wastage, so we really needed to add another to the tally.

Murder on its mind

Moving on, we saw some birds about 500 metres away flying in and out of a dry creek bed. Heading towards them, we then spotted a mob of four pigs, all huddled together in a tight pack, feeding on a dead Kangaroo. Amongst them was a good-sized sow, perfect for the freezer. Getting to 100 metres, Tim then took a rest, lined up and fired. Taking his third shot for the day, as the report from the 06 reverberated along the creek, she disappeared into the long grass, causing Tim to question the shot. However, Jim was confident it was a good hit, so we got to looking and soon found her in a small hollow amongst the long, dry grass.

With two good eating pigs and a boar, it was proving to be a great first day. Heading slowly back to the lodge, and with the sun nearly gone, Tim spotted another. This time, a black and white boar that was close to a mob of goats. They will kill young goats and Jim guessed that the black and white had murder on his mind. With Tim up front giving chase, I hung back a little and kept an eye on things through my binoculars. The boar, after its initial burst of speed, pulled up amongst the trees. Dropping to one knee, Tim took aim. Unfortunately, he missed, and it was off and gone!

Back at the lodge, we enjoyed a few drinks around the outdoor fireplace, while Jim worked on extracting the tusks and processing the meat. Inside, Debbie, his wife and lodge boss, was putting together dinner, roast venison of course. After a great meal, and a few rums it was lights out.

Heading out Sunday morning, it was my turn to shoot. The day started slowly, with little early morning activity. However, around 9 am, while glassing an open paddock, we caught sight of some very unusual movement. It was an animal alright, and probably a pig; however, it was shiny. As it came closer, we saw it had been wallowing before beginning its search for breakfast.

It was heading right for us, and as we were under cover, we decided to wait and see what would happen. It closed to 50 metres and we could see it was a small, solid boar, so I decided to shoot. Just as I fired, it turned and sprinted away. I experienced that horrible, ‘I blew it feeling’, and immediately started to try and figure out what went wrong. After about 5 minutes of beating myself up, we decided to leave and head towards a nearby dam. Coming out of cover, the Apostle birds drew our attention and looking up and to the right, there was the boar. It seems the shot was good after all, and as we walked up, I was happy, and relieved.

With my confidence back, we turned towards the dam. Along the way we caught up with Jim, who told us that he had spotted another boar nearby. Following, we then caught sight of a mottled example in open country. Even though I was first gun, I was happy with my pig, so I let Tim take it. Moving to the right, he positioned himself to cut it off if it decided to scoot. It was well he did, as after his first shot, it ran. His second connected and it dropped on the edge of the timber. It was 10 am, so we decided to head to another hide to wait out the next couple of hours before lunch, but the pigs weren’t interested.

After lunch, we considered our options and while we had some hunting left in the day, with five pigs for the weekend we decided to get an early start on the drive home. With everything packed, including some tusks and an esky full of meat expertly processed by Jim, we said our goodbyes, thanked our hosts and hit the road.