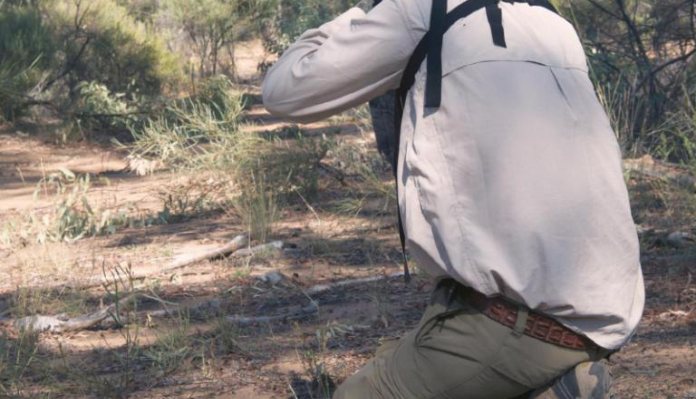 South of my place, 616 kilometres South to be precise, there’s a right-hand turn onto a well-cut dirt road. If you make that turn, and drive another 30 kilometres West, you’ll arrive at an old bullock train watering hole that goes by the name of Schwager’s Bore. With the departure of the bullock teams, the bore became a camp site, eventually falling out of favour with travellers. As with the bore itself, a sign, a single picnic table and some old painted logs are the only reminders of its once intended use. Since 2009, I’ve used Schwagers as home base for our hunting expeditions amongst a wild expanse of scrub, known as The Pilliga.

The Pilliga is a big place, and depending on logging operations, about 120,000 hectares of it is open for hunting. In turn, that 120,000 hectares is surrounded by a series of national parks, exclusion zones and areas of conservation, so you are right in the middle of a lot of nothing. There is a good chance you won’t see another person while hunting here and any kind of amenity is at least an hour away, so you treat it like it is, an average Joe safari.

I was back again, hunting wild goat with trusted hunting companions Tim, Simon and Darcy. The goats, once the progeny of domesticated livestock, can be found in good numbers, however, the sheer size of the Pilliga means long days spent in search of game with many kilometres between hunting opportunities.

The Pilliga provided me with my first wild goat, and to date also my best. It all started in 2009, followed by another hunt in 2012. Though both trips were successful, it wasn’t until 2014 that I managed to take a Billie over 31”. Public land trophies are hard to come by, conditions are tough, and quality animals are by no means guaranteed.

Boots on the ground

We had been on the ground for a few days now. The late January sun was at full power, with mid 40º Celsius days the norm. All that heat tended to cook up heavy clouds, which developed into afternoon thunderstorms. The storms had been severe, with rain, powerful winds, lots of lightning and small hail. Consequently, each day we kept an eye on the sky, as flash flooding along otherwise sandy creek beds and vehicle tracks was a real possibility and a danger.

Leaving camp early on our fourth day, we headed towards new country. Hitting the highway about an hour later, we crossed over, and kept moving for another 90 minutes, eventually arriving at the Eastern most boundary of the hunting block. Putting a plan together, we then spilt up with Tim and I turning North, while Darcy and Simon swung South. The idea was that we would meet for lunch at a dot on the map in about four hours’ time.

The morning was hard going, the heat was up, the scrub was at times impenetrable and the goats were nowhere to be seen. Covering plenty of ground, we would drive a little, get out and explore, and then move on in the general direction of our lunch stop. A little while later, we checked in with Darcy and Simon over something to eat and found out their experience was much the same. Looking over the map, we were a long way from camp, though with plenty of daylight, and a good supply of water on board, we decided on a slow and winding route, which, with all things working in our favour, would have us at camp just before dark.

Working as a team, we would pull over, head into the scrub and see what was about. On one such excursion, Tim caught movement about 50 metres up ahead. I soon spotted it too, a couple of juvenile goats moving away from us through the heavy scrub. Watching them, I then saw Tim, with Simon and Darcy, head off after them.

Moving a little to my left, I kept my eye out, spotting a black Nannie lying in the shadows. The Nannie was close and had been well camouflaged by the dappled light; however, it was the big Billie next to her that got my attention. He was up and alert, and about to slip into the heavy cover. As luck would have it, he was also offering a classic, standing broadside shot. He was a good, heavy animal, so I shouldered my rifle and fired off-hand.

The 30.06 boomed and, landing what I though was a good shot, I was a little surprised as the Billie began to move off, however I soon realised that thankfully he was only barely moving. Slowing walking up on him, I also got my first real look at how big the horn spread was, so I immediately readied to fire again. It proved an unnecessary precaution, as he pulled up, tilted to the right, fell over and gave out on the spot.

I could see the shot had been on the money, a ‘through and through’, that should’ve prevented him from moving at all. More importantly, I could also see that he was a big animal, though I wouldn’t know for sure until I got him out of the hellishly thick scrub. The others, led by Tim, had managed to take the two goats, so we all pitched in and dragged the animals out, and back to the track. For me, the Billie proved tough going in the heat and we were glad to have the ample water supply we had been carrying.

After taking meat and getting it on ice, we continued towards camp. Arriving a few hours later, I began preparing the Billie for a future European style mount, which now looks down upon me from my office wall as I write. As luck would have it, I forgot to pack the tape, so it wasn’t until the following Sunday that I managed to get a measure on the spread. It went just a smidge over 36” dry, which is trophy enough for me, until next time, that is!