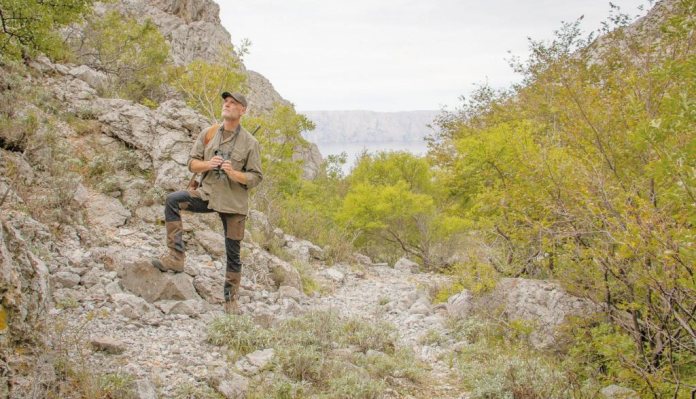 This is the second time I got the chance to hunt Mouflon and a bit different, as it will not be in woodland, but on the cliffs of the Adriatic coastline of Croatia. In the steep slopes and lush canyons, there are an outstanding number of animals; based on past experience, I have chosen suitable equipment. Sturdy shoes to stalk on the edges of volcanic rock, light, technical clothing, as it’s hot in the day but cool at night. Rifle-wise, I’m using a Tikka T3x Tac with KKC Stock and Sako Gamehead 130-grain 6.5 Creedmoor ammo.

The Creedmoor is becoming very popular and should be an ideal choice for mid-range shots. The T3x is fitted with a Burris Eliminator III. I’m excited about this combination, as the scope is a rangefinding type, which then automatically sets the aim point on the reticle. It’s good out to 500m, but I don’t think I will be pushing it that far, apart from on the range.

After 1300 km, I arrive and meet my hunting friends, who had prepared a surprise. They know me well and know that I prefer a quiet parking for my Overlander truck, so lead me to a small dirt road away from all civilisation. I park high up in the cliffs with a magnificent view of the Adriatic Sea.

As the sun goes down, I cannot turn away from the beauty of nature, the colours can hardly be described; deep blue, violet, red, orange, the whole range reflected on the calm sea; truly amazing. A nicer room with a sea view, for me, there is nowhere in the world. As I settle down for the night, my 10-ton truck starts to rock violently from what the locals call the Bora. The term represents the sometimes hurricane-force gusts, which in this area are famous and notorious.

I have no idea what winds prevail but a bottle dances across the table, to heat water on my stove is impossible (it constantly spilling over the rim of the pot) and I’m afraid to get seasick in my truck. Somehow I manage to still prepare a hot coffee and I’m curious how my hosts have planned the first day. If it continues, then hunting will be impossible, but and hopefully, perhaps a wind-sheltered spot, so I can test fire and zero the Tikka.

After a short drive back and forth across the mountains, we reach the shooting range. Completely different than we are used to in Germany, it is not a cordoned off area, with walls and rigid safety rules, but simply a quiet place, embraced by mountains in the hunting area, and where it’s not expected to endanger others. Targets are set out at different distances, between 100 and 500 meters to form my practice area. Although the wind is less than on the coast, it’s still very gusty, but it gives me some idea what to expect in the mountains and allow for it.

Before loading up, I get the feel for the Tikka in terms of length of pull, trigger and bolt operation etc. The Finns seem to have done a good job, as it fits me like a well-tailored suit and the trigger pull is excellent, breaking crisply at a safe and useable 2 kg. To whet my appetite, the target is a full-sized paper Mouflon at 100 m. I settle down and my first group is excellent, close together and consistent with no flyers, so I adjust it to the centre. Now to see if the scope can prove its skills too at longer distance.

Aiming, then pressing the button, the distance is displayed, and the aiming point automatically corrected. Cool, but the wind is moving the shots right to left, looking at the reticle, I see a number of windage lines, which allow me to aim off. The problem now is to find out which one I need to use, as at a distance of 500m they are not even on the target, so hard does the Bora blow. Only after several attempts do I see what is happening and working slowly try the various ‘aim off’ points, until I start to understand what is required. I also wait until the gusts are somewhat weaker, before releasing the shot. The results now achieved not only surprise me but also my friends, with decent groups right where they are supposed to be on the paper sheep. It’s very different from my wooded hunting territory in Germany, where there’s little wind and shots are not that long, but I’m really enjoying myself and building the all-important confidence in the rifle and scope.

The storm diminishes and we start our first stalk in the afternoon. The difficult part on the cliffs is not just climbing on the sharp rocks, but not to bring stones rolling down. The loud rumbling can otherwise spook the watchful wild sheep. However, we are lucky, because the game has sought shelter from the wind in the low-lying, scrubby areas and is only now coming out again and they look magnificent.

Two rams are fighting each other directly above us and it’s a spectacle which I will probably never forget. They rush towards each other and ramming with their skulls, with full force their helical horns pop against each other and you get an idea how much force is put into this rutting fights. The mountains amplify the noise and it gives me goose bumps. I do not think about shooting, just enjoying the spectacle instead. Ewes have gathered at the edge of the rut square and suddenly the fight is over, and the herd moves up the opposite slope.

This might be the opportunity for a shot, as one of the rams, is standing still. It seems too far but, I range him through the Burris, and it tells me he’s 248 meters! Fractions of a second latter the aiming point re-adjusts to the distance and I place it on the ram just behind the shoulder, gather myself and squeeze. The surprisingly sharp crack of the Creedmoor crashes and booms through the valley and I can no longer see him.

Now it is time to descend and cross the ravine again to find him, not easy in this terrain. But Emil my guide knows every stone here and after an hour, panting and sweaty we reach the carcass. We take time for a moment of silence to show our respect and give him his last meal. As we descend, I notice that the sunset is approaching. With a Mouflon on the shoulders, the steep coastal climb down is stressful enough but would be impossible in the dark. Completely sweaty, we reach the valley with great difficulty and at last light. Enough for today!

The next day is stormy again and the Bora is at its strongest, which makes hunting impossible. Even photography is out of the question, as it’s too dangerous to climb through the rocks in these conditions. I start to think about breaking off chasing for the day, when and as suddenly as the storm began, the wind subsides.

Cheerful sunshine greets me when I wake up in the morning and we set off for another game. After just a short climb we get numerous Mouflon in sight. I glass the heard and see a likely candidate, however, will the distance also fit? Because that’s usually the problem with hunting in the mountains or cliffs, as getting to the downed animal is sometimes impossible, or it can fall and be smashed to pieces on the rocks below.

The laser measures a distance of over 600 meters, and this is definitely too far for my taste. We can only hope the group comes closer to us. Sometimes a little luck happens and that’s what we have today. The sheep come right up to 350 meters and I am preparing for a shot. Everything, but really everything has to be perfect; aim point, wind and my shooting ability, as I only have one chance at this distance.

I clearly hear the bullet hit the ram and see it fall out of sight and now the familiar process of getting there and finding him begins again. We descend into the valley, and finally see him lying in a boulder field. But this is precisely the problem with animal recovery, the loose stones quickly slide down the steep slope and you have to be extremely careful not to slip. Given the distance I shot him at, on the ground we have to walk a lot further to actually get to him, as we cannot descend in a direct way. Emil is wearing my backpack and gun while I torture myself with the Mouflon. Thoughts like, ‘why am I doing this?’ occur to me as we make the tortuous ascent occupy. However, I know why; the unique experience, sunsets, the Bora, rutting fights, and the shared experiences of living in and with nature, these are all my drives.