Airgun Hunter: Changes for the Better 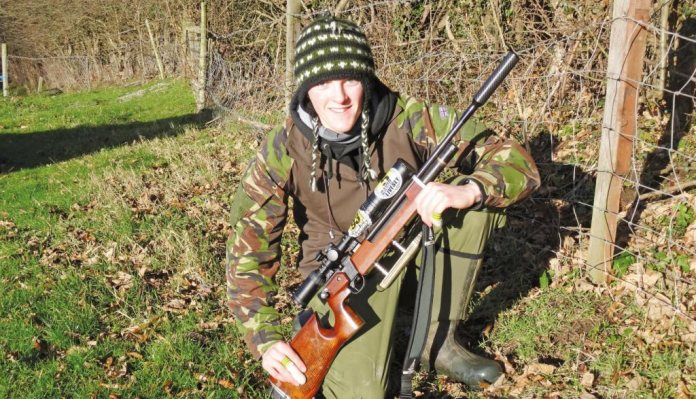 People have been commenting on my YouTube channel about adding a silencer to my S200. The main reason was that I mainly intended on using this gun for target shooting, but it’s too accurate to leave in the cupboard and only use in competitions. I left the muzzle the way it was, then fitted a Delrin air stripper.

As time went on, I acquired new guns that could be used for HFT. So, I made the decision to keep the S200 purely for hunting. I just love how light, short and (as already stated) accurate it is, but that air stripper was so loud! I had a short ½” UNF silencer and purchased a 15 mm barrel adapter to allow a silencer to be fitted. It arrived the next day. I was a little nervous to take it onto the field and zero it just in case the pellets clipped the interior. I have had this happen before and can remember how frustrating it is.

Another change I made on this trip was the pellets. I tend to stick with Air Arms Diablo Field 8.4-grain for all of my rifles. They perform well, are extremely accurate and have enough weight to knock over pigeons and squirrels etc. At a shoot, though, I was recommended by a good friend (Welsh HFT shooter and expert bunny basher Stu James) the H&N Barracuda Match pellets, which are 10.65-grain. He told me these were very accurate out of his gun and were a little more forgiving than the 8.4-grainers I was using. He reckoned they hit quarry very hard and gave me a few hundred to try out.

Eager to put my tweaked combo to the test, the next chance I had, I was down on the field with all the gear I needed for a quick zero and rough shoot. My AIM Shooting matt, Spartan bi-pod, pellets, pellet catcher, range finder and of course the gun. I was set up in choose from, as I was wide open in the field. I went for the only realistic shot possible, which was an unsupported stander.

The pigeon was on my 30-yard zero, so a bang on crosshairs shot was required. It was at a slight angle but nowhere near 45°, so there was no need to take that into account and the wind was none existent, making this pretty simple. I squeezed the trigger and there was dull pop from the silenced muzzle followed by the solid ‘thwack’ of the heavy 10.65-grain pellet striking the bird in the neck. There was no flapping or commotion to follow, as with head shots. The vertebra was destroyed paralysing and killing the bird instantly. It was dead before it hit the ground. With one down and my new pellets tested out on live quarry I was happy. If every bird dropped like that I certainly wouldn’t be going back to my light-weights for hunting.

I picked up the fallen woody and placed it down below the ivy-covered hawthorn bush, ready to collect on my way back. I wandered round the field some more, being careful to stick the hedges and whatever cover I could find. I could hear some ‘chatter’ from a tree a little down the track. Knowing it was a magpie, I didn’t get my hopes up for a shot. There was a short stalk before getting into range. They are extremely sharp birds, creeping in on magpies I find is often fruitless, but I’ll never say no to a challenging stalk.

I saw the derelict sheds 20 yards away that I had used previously for similarly positioned shots. They had worked well in the past on pigeons, but magpies were a different story. I knew I had to be slow, so as not to get their attention, but not too slow that the bird flew due to boredom. I did my best to be swift and stealthy. To my amazement, I was in the cover of the sheds without the magpie spooking. I continued to pick my way through until I could see the bird through a gap between the buildings.

I had a solid rest up against the shed. I got out the range finder and found that It was 48 yards away. With still no wind I was happy to go ahead with the shot. I looked at my range card to find the 50-yard aim-point and placed it on the magpie’s head. There was still no wind. I squeezed the trigger and the rifle released the hammer, sending the pellet on its way. For the second time it struck perfectly, and the magpie tumbled, hitting almost every bow as it fell. Upon retrieval I could see that the pellet had hit spot-on, a long-range head shot. Doesn’t get any better than that!

As time drew on and the winter sun started to sit lower in the sky, I could feel the temperature begin to drop. I decided to turn back and head home. On the way back, there was one more pigeon that presented a shot. It looked unwell and made no attempt to flee as I made my way closer. At 20 yards I put him out of his misery. Maybe it was pricked by one of the guns on the pheasant shoot next door on the previous day. I was more than happy with the way the H & N Barracuda Match pellets performed out of the silenced S200 and I am looking forward to the next outing with them. With the pheasant season drawing to a close, my next hunt is likely to be on the large estate over the road from this field. It’s been a long season and I can’t wait to get on those squirrels!!