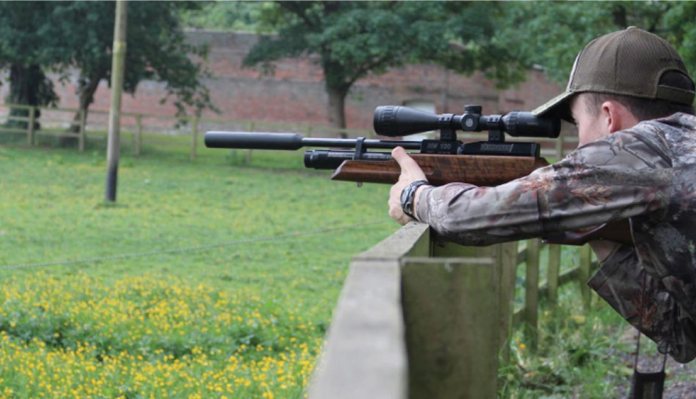 Almost all my air gun shooting, whether it is targets or pest control, is done with one brand of rifle; Air Arms. I started off with a TX200 and now have S200s, S400s and an EV2. People have always been urging me to try something new and I just never have, simply because I was happy with my AA guns.

However, I fancied a change, but wasn’t 100% sure what to go for; with FX or Weihrauch being top contenders. In the end, I settled for a HW100KT in walnut, simply because of the price difference, especially in the second-hand market. Straight out of the bag I was impressed. I chucked on one of my favoured Hawke Airmax scopes and headed out for a quick zero and calibration before hitting the fields for some vermin shooting.

My first, and what would be my only pellet of choice, was the Air Arms Diablo Field 4.52. They worked well through my other guns, so why waste time trying different brands before first using the Air Arms. At 25 yards, the gun was putting neat little one hole groups, I shot a number 5-shot groups to be sure the gun was spot on. I then moved the target out to 45 yards. Knowing my aim point was 1.5 Mil-Dots with most of my other guns and it was bang on, so no need to print out a new calibration chart. Again, after putting 5-shots down range, they were all under a penny.

If it did this further out, I would understand why people rave so much about the legendry HW100. I pushed the range to 65 yards, just to see what the grouping was like. I propped the gun on my folded rucksack (forgot my bipod) and made a fist with my left hand and placed it beneath the butt of the gun. This way I could fractionally adjust the point of aim without making any major adjustments to my position. If I needed the muzzle to drop I just made it tighter. I did not have aim points out to this range, so I guessed it to be around 3 Mil-Dot. Good guess, with the first shot landing just a few mils from the intended dot on the card. I made a 5-shot group and was very impressed. All the shots landed underneath a 2p coin.

There was a slight bit of wind drift on this day, so hunting at this range was a no-no, but at least I knew that gun was accurate and ready to go. I had not yet fitted a sling to the HW100, so by the time I finished, I probably wouldn’t need to go to the gym for another month, as it’s certainly no lightweight! Clipping my rangefinder to my belt and loading up the spare magazine, I was pretty much good to go. The weather was beautifully warm but a bit muggy, so I didn’t really fancy using a head net. Instead, I would have to rely on my field craft to get me within range of any quarry. This permission is out in the sticks, which means that the birds are wary, unlike a few of my other pest control shoots, where you could get within throwing distance without any cover.

I set off. Within a few hundred yards and with my rifle being held by my side, I was appreciating how short and compact this little gun was. I could lock out my arm and carry it using the thumbhole grip and the muzzle would be well clear of the floor. Not something I could do with any of my other rifles. Using the cover of a large rhododendron hedge, I made my way closer to a horse paddock that had proved fruitful in the past. There is often rabbit, pigeon and corvid on the grass, so I figured it would be a good place to start.

I made my way over to a peaky hole in the hedge, from where I had a clear view of the field. Sure enough, it was far from empty. There was no opportunity for a shot yet, because the pigeons feeding in the grass were too far away. They were right over the other side, at least 80-100 yards away; I didn’t even bother to use the range finder. I decided I would continue to use the hedge that surrounded the major part of the paddock, hopefully I could get closer in and within range of a shot. I stalked in closer, being careful not to tread on any of the fallen branches or even small twigs that had fallen recentley. More than once, I have had a long stalk ruined by one second of underfoot carelessness.

I was making some good ground, until I was stopped by the sound of a squirrel jumping from tree to tree above my head. I looked up and scanned the branches. I saw the leaves still moving from where he had last jumped and spotted a hole in the direction it was moving. It must have got to cover before I even had chance to spot it. As I was looking up, I saw a pigeon glide into a large tree over the other side of one of the tracks leading to the farm. It was within range, approximately 50 yards away, but it was obscured by some branches of another tree in the foreground. I slowly manoeuvred my way to the left, allowing me a clean flightpath.

There was the stump of a tree handily placed for me to rest on, which allowed me to take a rock steady shot. I placed the second Mil-Dot on the pigeon’s crop and squeezed the ever-so-crisp trigger on the 100. Predictably, there was a barely noticeable ‘pap’, followed by the satisfying dull slap of the .177, 8.4-grain pellet striking the bird and dropping it cleanly. From the way it fell, I knew it was dead on the ground, requiring no rush to retrieve it. Instead, my attention was back on the bird in the paddock that had not been disturbed by that last shot.

I was almost in range; just a few more paces were needed for me to be completely happy. I made my way over to the fence surrounding the horse paddock; I’d much rather a supported shot than free standing. I reached for my laser to check the range, sometimes the distance on these fields can be deceiving and they have caught me out before. Again, it was not a close shot. The pigeon had spotted me or was spooked by something and flew up onto the fence. It was 55 yards and I had to take a horizontal shot. It was safe because there was nothing but a planted wheat field behind. I steadied myself and pulled the trigger.

I am pretty sure my shot release was OK, and everything felt like the bird should have dropped. This was not the case though, as pellet sailed straight over its head, as I’d allowed a touch to much hold-over. I was grateful that the gun was so quiet, as the bird barley flinched. I reloaded and steadied myself again. I remembered seeing the glint of the pellet as it flew over the top on the last shot, so I made the appropriate adjustments and fired. This time there was no mistake, as the pigeon rolled backward off the fence and disappeared into the thick carpet of grass.

Again, I let it be. I was sure that it was dead on the ground. I wandered around, keeping tight to cover wherever possible. I had no real plan of action and was just happy to be out in the countryside. I walked for a good while before my third and final opportunity arose. I was in a small patch of woodland and heard two pigeons (apparently mating) somewhere in the canopy. The leaves were thick, so spotting them was tough. The female decided she’d had enough and flew off, leaving the male contemplating his situation.

It was facing away, with its rear end over the back of a branch. I raised the rifle and put a pellet right up through him. The pellet travelled up through the heart and lungs and out its upper back through the spine. It didn’t move a muscle and dropped forward hit the deck. This shot I am told by my good friend Rob Collins AKA ‘The Ole Hedge Creeper is named ‘The Texas heart shot’. Over the years, Rob has been a regular source of encouragement and insight, but I remain unsure whether the ‘TBS’ is a well-known term, or just what Rob calls it! I now had three birds in the bag. The evening was drawing on, so I decided to call it a day. The HW100 performed brilliantly. I was chuffed at how it handled and how steady it was to use. The extra weight really helps anchor it in place for the kill shot. I am looking forward to many more hunts using this tremendous gun. Weihrauch air rifles are distributed by Hull Cartridge Co; www.hullcartridge.co.uk www.weihrauch-sport.de Hawke Optics; www.hawkeoptics.com