Airgun Hunter: Come on Down 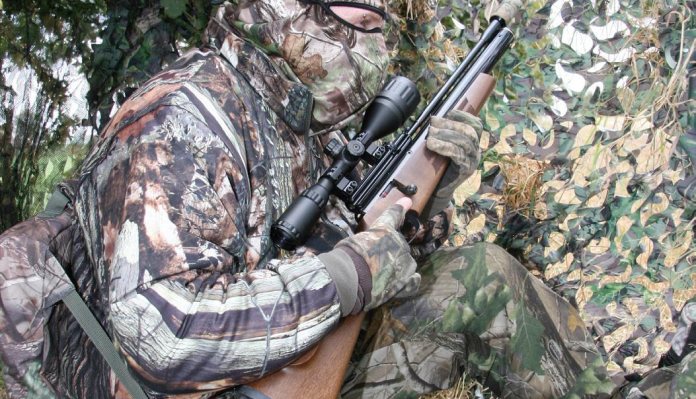 Come September, when many crop fields have been harvested, this is the time of year the shotgunner makes best advantage of using decoys. Shooting from a well-positioned hide picking off birds (more often woodies) as they come to feed on the left over spillage and split open seed pods. However, we airgunners can operate like this too, though we adapt this method to entice the quarry into shootable range and obviously wait for them to land for a static shot.

I don’t believe in sugar coating anything, so as I always say to any airgunner who asks, decoying wood pigeon within range in situations such as this this isn’t as easy as it sounds! For instance - major factors that need considering before even getting your kit together are how long has the field been left cut. How many other shooters already (particularly shotgunners) have been shooting over the area you intend to try? Last but definitely not least – have you got the area to yourself for the day you intend to shoot? However, having said that, if there are shotgun shooters operating on adjacent fields, sometimes this can have the birds move towards your area due to it seemingly being less threatening. Even so, as I experienced on the day of the shoot I’m talking about, it can also make the birds very skittish!

Due to prior commitments, it was over a week before I got chance to try my hand here. Fresh cut fields are always the prime ones to shoot over, but birds will still visit the stubble for months, just not in the numbers they initially do. However, intermittent small groups of birds are more conducive to air rifle usage as you’ll soon discover!

You could say, as airgun hunters, that we have to put a lot more time and effort into the tactics if we’re to gain the most from them, so where to build a suitable hide? In this instance, it was adjacent to an established flight line that ran close to the field’s edge, which is marked by intermittent lines of hawthorn bushes and various types of trees. These effectively form the boundary between my permission and the farm it backs onto.

Only prior observation can give you the knowledge you need to find flight lines. So take the time and trouble to watch the area in the days prior to your shooting, so that you can build up a picture of the birds ‘routes’ as they move to and fro – in the morning leaving the woods to feed over the fields and the last ‘flight’ as it’s known before they make their way back to roost. I was satisfied I’d ‘mapped’ their movements to the point I knew they would either flight over from the large wood at far edge of the stubble field I intended to target or along the opposite side of the field itself before dropping down to feed.

Having employed this type of hunting technique many times before, I soon erected a hidden shooting position using the traditional method with height adjustable hide poles and netting. I’d set the structure right in front and leading around a large oak tree beset on either side with hawthorn bushes. Reason being this type of rear cover makes for a great backdrop for a traditional hide and in this instance another bonus was the tree’s lower foliated branches supplied a reasonable level of cover from above. I always use Camoreal netting due to the large open weave net and die-cut ‘loose-leaf’ design offering plenty of shooting points, plus this type of netting is the easiest for adding natural foliage onto, which gives you even more concealment and blends the shooting position nicely into its surroundings.

It’s always advisable to cut foliage you’re intending to ‘embellish’ your netting with from some way away from the hide, so as not to leave the area directly next to it looking unnaturally bare. Personally, I only sparsely dress a ‘net hide’ with natural vegetation and mainly near and/or next to the hide poles to break up the unnatural straight lines they form at the edges. But, follow these few simple guidelines and you’ll be surprised how quickly a very effective hidden shooting position can be built.

Next it was out with the decoys; I’ve found in most cases a loose irregular horseshoe pattern works best. Also keep the pattern quite tight and use a mixture of full body flock and half shell deeks. The latter I place on ‘spring sticks’, so that any breeze gives them a slight ‘jiggle’ to bring some movement to the pattern. I would also normally place a ‘floater’ at the back of the pattern, but as the area had been shot over more than a few times prior to my visit – I find they can often deter as much as attract.

Speaking from experience, I feel this is due to birds having near misses by the shotgunners as they turn to land over them, resulting in any that do come to patterns with a floater deployed on future visits seem very reluctant to land. So with my hide in a prime position approximately 30yds from the centre of my decoy pattern – the area the birds ‘should’ be tempted to land in – I quickly put the essentials I’d need for the session in the hide, then after loading my PCP, I was ready to go! I was confident; a well-positioned and correctly constructed hide and clear view of the deeked area; the scene was set!

I didn’t have long to wait before the first birds came in textbook style, gliding in from my right to land towards the front rear of the pattern. As usual, they first stood alert, looking around for danger, then, when settled, they began to peck at the left over grain. Carefully poking my rifle’s camo tape covered silencer through the netting, I placed the cross hairs on the closest woodie. Intermittently it’d raise its head, showing those familiar white bars as it ‘doublechecked’ for anything unusual, and then when confident in its safety, it’d resume feeding again. It’s at this point the airgun hunter has the all-important ‘window of opportunity’ to take the shot!

So as soon as the bird I was trained on presented itself again – its head held high - I carefully and slowly squeezed the trigger, sending a pellet to connect squarely with its skull. It dropped with hardly a flutter, wings partly outstretched, so I felt no need to break cover to retrieve my first of the day. A few more came in and again helped by the inherent accuracy of my rifle I kept dropping one from every small wave of birds that fell into my trap.

Then disaster struck; loud ‘bangs’ in the distance had birds flying over ‘en masse’, a clear indication a shotgunner had arrived, filling the skies with birds but unfortunately none dropping in to my area. Hoping they might return, I took the opportunity during this lull in activity to gather up a few birds I’d previously left where they fell to integrate them into my deek pattern. Reason being, there’s nothing better than a ‘real live dead one’ as they say - so I set out the ‘kills’ amongst the decoys for added attraction. Rather than use a chin stick or cradle, which puts the dead bird in a ‘heads up’ alert position, I prefer to push their beak into the ground, smooth its feathers down and leave it in a feeding posture.

I eventually heard less and less shotgun noise from the adjacent field, then again I’d not seen a pigeon for nigh on 3hrs as well. However, as can often be the case in these situations, just as I was going to call it a day a crow ‘bold as brass’ silently glided in and land to take up residence at the tail end of my decoy pattern. At approximately 42yds it was a testing shot, but I was already in a very comfortable seated position, so the ‘lonesome crow ‘got his!

It crumpled to the floor stone dead as the pellet impacted with a loud ‘smack’ on its very tough nut. Realising the best of the day was over, and with the gathering clouds further darkening and threatening rain at any moment, I decided to end the session on a high, still buzzing at what was a very memorable shot!