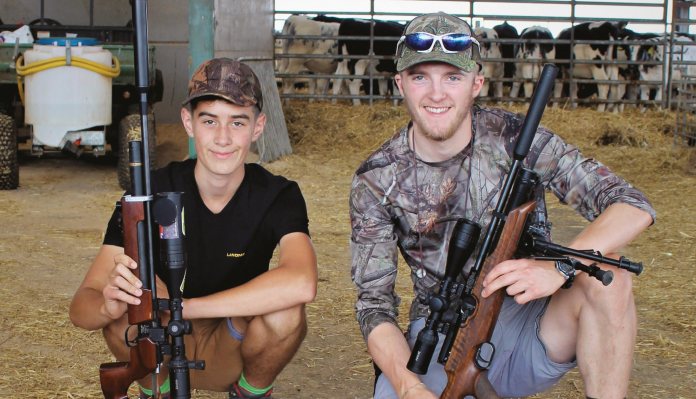 Shooting alone is something I have always done. Being a dedicated air rifle user, I never had much opportunity to experience the pros and cons of a team mate, and when I did in the past, it was counterproductive. However, two people can see and hear a lot more than one! Also, since shooting more with a shotgun, I have had the chance to engage with others and it’s opened a whole new world. I have never had a problem hunting on my own and enjoy the solitude but having someone beside you really makes it a totally different experience. The banter makes time travel so fast, even if there isn’t much shooting. It’s great being able to watch a friend shoot and vice versa. ‘Taking the rip’ when they, or I miss, is all part of the day.

On this trip, I was out with my good mate Tom. He lives on a local farm and his family know lots of other farmers who need pest control carrying out from time to time. We first met through our mutual connection with the game keeper. Tom had a call from his uncle, who runs a farm half an hour away; they were having lots of trouble with feathered pests. It was a dairy farm and the feral pigeons and doves had set up shop in the cattle sheds. They had tried many ways of deterring them (even catching them) but all methods had proved fruitless; so, there was only one option left. We were also told the shotguns may come in handy for the large numbers of crows that were down on the fields, pestering the cattle. We broke the day into two sections; before lunch; would be solely air guns and after we’d step it up a notch!

Tom and I picked our rifles of choice from my cabinet; he went for one of my S200s. It was a great choice and for the regular readers, you know how well it has served me in the past. Currently, this gun tends to take a bit of a back seat and most of the heavy work is done with my new HW100KT. Both had matching Hawke Airmax 4-12x40AO scopes in the excellent Sportsmatch mounts. I got away with low ones on the S200 but had to go with mediums on the HW100. Thankfully, the aim points at the different ranges were pretty much the same, which was excellent for me because it meant we only had to carry one range card (which I had largely memorised). The rest of our kit was minimal. We put the dive tank in the boot, as we were unsure how many shots we would be having; so, better safe than sorry.

We made our way over to the farm with some sketchy directions from Tom, he now knows that telling me to turn left 20 yards after passing the turning isn’t most helpful. A few U-turns later and we pulled up the drive. We could see the sheds from a distance and the pigeon problem was prominent. There were many flying over the sheds and even more on the roofs. This was going to be a big day, maybe even our best day.

After popping into the farm house for a brew, it was time to get to work. We soon filled the magazines, made sure our pellet pouches were full and slipped on our boots. This wasn’t a trainer-friendly farm yard! Tom and I slowly made our way towards the sheds that looked most likely to hold the pigeons, sticking close to the walls and edged closer. Now in the shed, we could really see the extent of the problem. Pigeons had been eating a lot of the meal put out for the cows. That was bad enough. No farmer wants to be spending money to feed birds. Worse than that though, was the poo the pigeons and doves were leaving in the feed. This can be a significant health risk to the cattle and can ruin the feed. Tom spotted the first of many targets. I would spot for him and get the range while he set up for a shot.

I brought up the rangefinder and measured the first pigeon to be only 35 yards. I told Tom to place the crosshair on top of the head, as this would allow the pellet to fall into the skull for a quick and humane kill. Even though these birds are pests and need to be shot, we certainly did not want to cause any unnecessary suffering, just efficient control. Tom’s a good shot; growing up on a farm, he is no stranger to firearms, so I was more than happy that he was capable of doing the job. We had one final check to make sure that there were no cows in front of the barrel (very important). Even though we couldn’t see one though the scope, if one stood up it could still be in the line of fire. Secondly, we checked that the pigeon was against a solid back stop, as putting holes in the roof was not an option! This pigeon was against a steel girder, so there was no issue. A press of the trigger and the pigeon dropped to the floor with the frantic flapping that follows a head shot. With the first one successfully on the ground, we started to relax and settle into to the job. There were a lot of birds in the sheds, some were spooked by the sound of the pellet hitting the steel behind, but we still had a lot of targets to go for.

For our next shot, we double-teamed it; I checked the range, to ensure that we had our aim points sorted. We both set up on two birds that sat next to each another and counted down from three to one and fired simultaneously. It went brilliantly, it sounded like one shot, I wasn’t even sure he had shot, that is until I saw his bird drop to the ground along with mine. That’s how we played it for the next two hours, dropping bird after bird after bird. It was epic fun and very efficient too.

We split up and spread our efforts over two sheds. Our plan was, if I shot one, those which spooked would likely fly into the other, where Tom sat, ready to ambush them as they landed. Sort of ‘shooting tennis’. We only had one rangefinder, so he memorised the drops before I left him, taking the Hawke LRF 400 with me. Upon entering shed number two, I spotted my first target. It was another white feral. This time it was on a pole that was a part of a horizontal across the structure but did not have a clear back stop. I could have risked a body shot and hoped the pellet would not pass through, but I needed to be sure.

I tried to manoeuvre myself, so that I could see a girder behind the pigeon’s head, I wasn’t about to start taking risky shots! In the space of about 30 seconds I had moved to an ideal spot with a rest and most importantly, a good back stop. This pigeon had no idea what was coming. It can’t have been shot at before. At 20 yards, the dispatch was easy; I glued the cross a fraction behind the eye and within the time it takes to turn one thought into another, the pigeon was dead, lying in the cow mess that lined the floor.

We carried on shooting and the birds just kept coming; it was like a running tap! We missed a few and unfortunately wounded a few. This was inevitable, I guess, with the amount of shots that we took, we just had to make sure we did our best. If the bird flinched at the last second, then that was out of our control. Overall, though, we did well and thankfully managed to finish off the wounded birds, which is another benefit of a shooting partner. They can often move faster than the original shooter who’s still stuck in the last position. If I fluffed a shot, Tom was there locked and loaded to finish the job. We managed to retrieve over 30 feral pigeons and had over 100 birds throughout the day, including what we managed to decoy with the shotguns in the fields.

That day would not have been anywhere near as enjoyable without Tom. He was great company and together we made a good team. I’m looking forward to many more hunts together, as we both learn to shoot better as a team, building bigger bags and a greater friendship. There is a saying which goes, ‘A problem shared is a problem halved’. When that problem is pigeons and it is shared with a good shooting partner, I reckon the problem is halved and the experience is doubled!