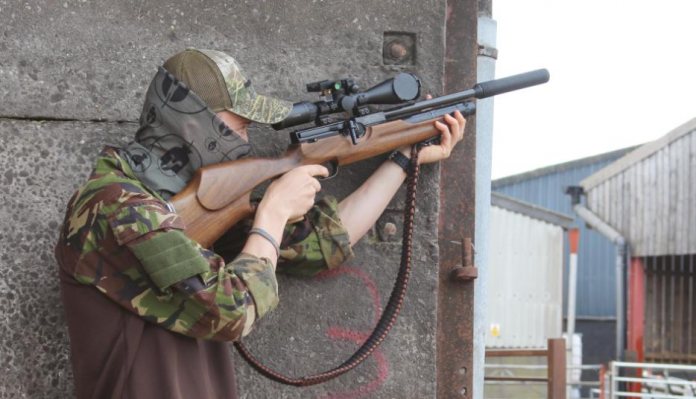 Throughout this wet summer, we have spent more time shooting inn farmyards than any other venue. My thoughts are that maybe now the crops are high, it’s more difficult for the birds to feed on them? This causes them to seek out easier pickings of cattle feed down in the sheds. The problems here are obvious. Firstly, the farm isn’t in business to feed pigeons and, perhaps more importantly, large amounts of bird mess in and around the feeders risks the cattle ingesting it and stock health being compromised. Tom’s family friend owns a dairy farm on the Welsh border with this exact problem with pigeons and jackdaws. They asked if Tom and I could head over one of the days and reduce the numbers. We got our diaries together and fixed a Sunday. The following week we headed off early to see if we could help.

When we arrived, we instantly saw the signs that the farm was overrun with Jackdaws.

There were large amounts of little white droppings all over the yards and on the railings above the cattle feed. We looked where they were most prominent and decided this would be a good place to start. After a 10 minute recce, we found a promising spot between some bales. We could stand there and be fairly well concealed with the added bonus of a quality rest for the gun.

The target area was some rails high above us that overlooked the silage pits. It looked to me like the birds were coming over from the fields to land on these before dropping down onto the tarp covered silage. On closer inspection, we could see pierced holes in the plastic sheeting protecting the feed, doubtless done by the birds. This is intended to keep it dry from rain. With the recent heavy downpours, it was no longer particularly waterproof; yet another reason thinning out was required.

We got comfy and began to wait. Sometimes, you can just walk around yards and have good success, but this wasn’t going to work here; an ambush was required. It was probably a good 15 minutes before we got a shot off. We heard the bird before we saw it. Our panoramic vision was severely hindered due to being hemmed in by three, very large walls designed to keep the silage from spilling all over the place. We could only see the birds once they had landed, hence keeping a keen ear out for any early warnings. This one squawked and then settled on the highest bar. I was already cocked and waiting. We made sure that we knew the different range points to save time for future targets. Any unnecessary movement would risk spooking the birds before we could do our job.

This one was well within range and the elevation just meant I had to hold a little under my usual 20 yard aim point. Thankfully, I had the Spartan bipod fitted and this gave me the most solid platform I could hope for. I had plenty of adjustability on the legs, to compensate for the strange angles. I let the shot off and the pellet hit the bird in the neck and travelled up out of the back of its head. It fell backwards on to the silage in the pit next door. The corvids kicked off and began making a hell of a racket. Some had spotted us, but not all. Jackdaws are inquisitive and I was hoping that a few would come and land on the same rail, to have a closer look at the dead bird. This has been the case on so many occasions and this time was no different. Bird No. 2 landed up on the beam above the victim. I was already loaded and on target. Another whisper of a shot released from the HW silencer and bird was on the ground.

We waited in the same location a little while longer, hoping the two dead birds might attract some attention but it was not to be. I made the decision to set one of them up as a decoy. To do this, I found some fencing wire and with my ever-present Leatherman multi-tool to cut the desired lengths. I wanted the bird to be as realistic as possible and also high. I hoped this would catch the attention of passing birds from a greater distance. We grabbed a ladder and I climbed up to the top bar to carefully set the decoy. It was a rather windy day and I didn’t want it blowing off, so I wrapped the wire around the bar to be sure it was secure as possible. To take advantage of the wind further, I snapped both wings of the Jackdaw and angled it facing the wind. When a breeze blew, the wings bounced up and down, giving it some movement, almost bringing it to life.

With our decoy set, I got back in position. In the meantime, Tom went for a wander, to see if he could stalk in on any vermin, which was a good shout, as it meant we could cover more ground that way. It was again a little while before my next shot, but the wait was worth it. A large carrion Crow glided overhead, before landing next to my decoy. Whether it would have landed anyway, or the deek brought it in, I don’t know but I was grateful for the opportunity. Again, I lined up and began squeezing the trigger. Just at this point, a gust of wind hit so I held on for a few seconds, hoping the crow wouldn’t see me. It didn’t. I returned to my aim point on its head. There was a loud crack as the pellet struck. Crows seem to be much harder than other quarry and headshots always seem louder. It flared its wings and fell to the ground.

Again, I waited for more birds to drop in, but it wasn’t to be. I heard Tom having a few shots, so left my position to join him. Before I broke cover, I spotted a Collard Dove on the roof of one of the sheds. I’ve said it before, but one of the great things about farmyards is the abundance of rests available. Everywhere you look, there is something to either prop your gun on or lean against. This also provides good cover. This time, I used a concrete wall to support me. The Dove was within 30 yards, so not a great deal of thought was needed. The wind was still up, off my left shoulder, so I held a mill dot to compensate. The pellet struck the bird square in the chest and it rolled and tumbled down the corrugated roof, before hitting the concrete yard. If this was a pigeon it would have probably just flown off, they have a much denser physique and require more precision, whereas the Dove is slight and it doesn’t take much to bring them down cleanly in my experience.

I let Tom know I was coming (just to be on the safe side) and we had a walk around. He had some luck, bagging up a bonus couple of rats that just popped out at the wrong time. He was using a pretty old, but perfectly capable BSA SUPER 10 that had one of my MTC Viper Connect scopes on top. He hadn’t had the setup long at the time of this shoot, but the upgrade from the old break barrel he was using previously seemed to suit him well!

It was .177, which was great, because it meant I knew all the aim points so could help when it came to shots that required a bit of hold over, I had spent some hours looking down his scope when it was mounted on my 100 and I loved it. We spotted a couple of woodies over in some trees surrounding the farmhouse garden and thought it would be worth having a stalk over. He led the way, knowing the farm better than me. We used a brick wall as cover, which allowed us to move swiftly without fear of being spotted. In no time at all, we were close enough for a shot and there was a wall at an ideal height for both of us to rest on. Having done this many times together before, Tom knew the drill. He had the bird on the left and I the right. I counted down “3,2,1 (bang)”. Both dropped through the conifer trees and out of sight.

We gave each other a pat on the back and cheerfully moved in for the retrieve. We shot steadily throughout the day and managed a pretty decent bag. After things went quiet, we called it a day. The farmer was more than happy with the result and even offered to pay for the fuel. It’s great having farming friends that have farming friends. My shooting has really opened up since knowing Tom. I think we had better make the most of this farmyard shooting. This recent weather has been so poor and the summer so short, soon the crops will be harvested, and we’ll have some real work to do out in the fields.