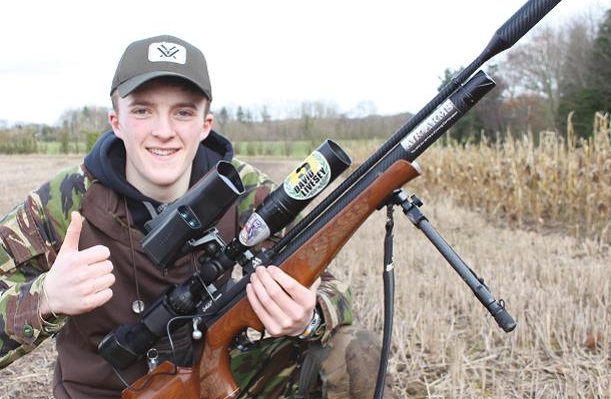 Pest and vermin control plays some part in most people’s lives; especially in the countryside! Most of you who are reading this are probably involved in doing it yourself, or for someone else, as I am. However, if the job is to be done as effectively as possible, the equipment required can be far from cheap.

I have recenelty been given Nite Site’s newest Wolf RTEK; I had seen this used a few times on YouTube and it looked like a quality bit of kit worth testing. I am familiar with the Nite Site brand, having used the NS50 on previous ratting jobs, so I found the set-up fairly straightforward. This meant I could get straight down to work, while seeing what improvements had been made to the older model.

When the unit first arrived, I instantly saw the quality of the carry case. Compared to the older models, it was infinitely improved. Nite Site had also included their new range finder, I soon
learned that this is a must when pest controlling at night.

The camera can now be turned on and off with the simple push of a button, rather than having to pull the cable out in order to save battery life. I found this a huge improvement. The ‘one push’ button recording feature was also welcome; no more mini DVR’s and cables coming out of my ears! Just a simple micro SD card and a little red button, PERFECT! It also has integral Wi-Fi, to allow the image to be streamed onto a smart phone or tablet. I never had need to use this but if out with a partner it could be handy!

The battery pack is slimmer too, its sleek design now straps to the scope, rather than the side of the stock, making the whole rig far lighter and less bulky when walking. The screen and infrared illuminator have also had their fair share of upgrades. The main one; the screen can now be dimmed to as low as required. The benefit is that your quarry won’t see the glare on your face, making it even stealthier. To take the brightness down, previously, filters had to be added but even then, some light would still bounce back.

When it comes to rat shooting, I am by no means experienced. The most I had ever shot was three in a night, which is pretty poor compared to some. This was just on a small chicken coop. The land owner was happy, so that was all that mattered. I must admit though, the odd rat isn’t really putting this beast of a set up through its paces. I knew I needed something more to see the full potential of the unit. I rang the game keeper, who I will call ‘John’, and told him my situation. He was more than willing to lend a hand and wanted to see the Nite Site in action for himself. That night, I met him at the top of a lane I had never before visited. He told me we would be going round the pheasant feeders, picking off any rats we came across. This is an essential job. Rats are a real problem in these situations, as they chew through the feeders and eat a lot of the seed put out for the pheasants. They carry disease and in general are not nice creatures to be around.

We parked up and fitted the unit to my day scope, the first thing that impressed John was how quickly it could be assembled. And it does not need ‘re-zeroing’, as it’s merely a viewing system designed to use your existing optic. He is used to dedicated day and night scopes, so this was a new concept and one that would prove to be extremely effective throughout the night.

Jumping in the pick-up, I soon found the best and most comfortable way to shoot. Resting on the door with the window down was rock solid. I could shoot rats close in and at range, whilst having a wide field of view, which was ideal. The night was fairly brisk and the heavy rain over the past few days made the truck work to get to each location. It certainly wasn’t silver by the time we had finished!

Upon arrival at the first feeder, there were a lot of rats (or so I thought). I could see approximately 20 with their heads sticking up and John told me this was nowhere near the numbers of the previous year but it was more than I had ever seen. I lined up on the first customer of the night and checked the range finder. Without this neat little gadget, I’m afraid I wouldn’t have had a clue on the distance. I needed 1/4 of a Mil-Dot hold-over. The rat poked his head from the side of a feeder prop and ‘smack’; one down. John was impressed! The first shot was a “goodun”, according to him. The rat started jumping about and giving it the ‘helicopter tail’. I re-loaded for another shot. With the moderated Air Arms S400 the first shot didn’t spook too many rats and there were still plenty of targets to be had.

The next rat to appear was much closer. Thanks to the range finder again he was 10 yards. At this range, I knew from memory that 1 and a 1/2 Mil-Dot was needed, so again I placed the aim point on the rat’s head and it made a sure smack on impact. To my confusion, later in the night, when it came to picking up, it had just disappeared, John told me that often when he is rat shooting he sees other rats dragging away the fallen to eat. A lot of rats we shot, we did not manage retrieve and this could be the reason why. So, having shot 4 or 5 from this location, we moved on to the next feeder a few fields away.

Turning on the unit, the first thing I saw was a rabbit; at 45 yards, I was confident, well within range on a still night like this one. 1.5 Mil was needed, this is the maximum range for HFT and I was almost sure the rabbit was going to be in the pot the following day. I released the shot and watched the pellet through the screen. I heard it strike but it was not the sound of a pellet striking a rabbit. A small twig caused a deflection and the rabbit ran on, unharmed. We carried on taking rats left, right and centre for a good 3-hours. The Nite Site never missing a beat. One thing that impressed both John and I was the battery life. It didn’t run out of power, the whole time we were shooting and from such a small, light and compact bit of kit it was amazing.

I decided to take head shots at all of the rats, just to be on the safe side, I wanted them to drop on the spot and be 100% dead. This did mean that I missed a couple, which is fine, as it means nothing got injured. Just as a test, we did decide to heart and lung shoot a couple. The first had to be one of the biggest of the night, it was that fat it could barely walk by the look of it. Sticking one in the engine room, it just rolled over and didn’t even twitch. This made us think perhaps heart and lung shots were a better bet? The next shot was a different story. I think I must have just missed the vitals by just a fraction and it ran on (not how I like to do it).

A quick follow up shot was given and from then on we decided that head shots were the way forward, in .177 sub 12 ft/ lbs at least, anyway. The Nite Site was an amazing bit of kit, it allowed the gamekeeper and I to take well over 20 rats, hopefully making a positive difference in the productiveness of the feeders. This Nite Site Wolf is mega-effective, easy to use and certainly gets a big thumbs up from me.