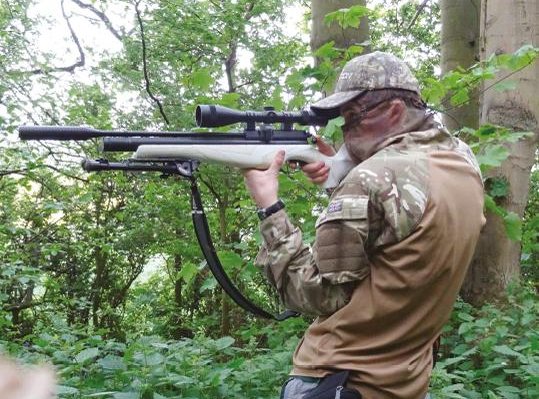 It was one of the nicest days of the year so far and I was at work, itching to get out in the field. The gamekeeper (John) had told me previously that I did not have long before the pheasants would be arriving at the shoot and I would have to limit where I was able to shoot. He also said he’d seen a large increase in the number of grey squirrels. The young ones were all emerging from their dreys at this time of year and starting to explore the woodland. They are not as edgy as the parents, which can sometimes make them easier targets, so this was the ideal time to knock a few down before they grow up and start doing some real damage! It made sense that I made an impact before the new arrival of the birds and all the hoppers. As soon as 5 O’clock came, I was out of the door like a flash. I sprinted home, grabbed my gun, pellets, a camo top and range finder.

I made record time and arrived at the farm in half an hour, so there was still plenty of light and hopefully, plenty of targets. On my way down the drive, I always load up a magazine and have the rifle ready to go out the car window. I know what opportunities can come up when heading down to the shoot and I know how frustrating it is not to be prepared. It’s a good job I had everything ready on this occasion.

I slowly approached a large oak tree. One benefit of my little Fiat Panda is having a large sunroof, so the field of view is not limited to four windows and the windscreen. I could see no activity on the approach; however, when I was directly underneath, looking up through the sun roof, I noticed a flash of grey darting around the other side of the tree. Stopping the car and trying to silently and slowly open the door, I slipped out and gently rested the Air Arms S410 .177 on the roof, hoping to use it as a stable shooting platform. I waited there for a minute or two but saw nothing. Not wanting to let the chance go to waste, I stalked round the other side of the tree.

Squirrels normally just play hide-and-seek, usually running to whichever side of the tree I am not, this one just bolted and headed for the hills! Unfortunately for him, he stopped to have one last curious look before it waved me goodbye for good. There was a small gap in-between all the branches, just big enough for a shot. I took no time in deciding whether or not to take it. The rifle was up and the squirrel was down within a few short seconds. I didn’t have time to use the range finder, so guessed it at 35 yards. The retrieve was easy. The wood was mainly pine with little vegetation on the ground due to the lack of floor light. I hoped that this was the start to a good day.

Getting back in the car with one squirrel already under my belt, I drove a little further. I could barely believe my eyes when there were three more sat in on the outskirts of the drive, chewing on pine cones just 70 yards from where I had just stopped. Luckily, the gun was ready to go out the window, a quick pop with the range finder to find the nearest one was at a comfortable 45 yards (1 mill dot and a half for me). A quick cycle of the bolt and I had the rifle on aim. The squirrel was sat on the dusty track now, almost bolt upright with the pine cone in its claws. I gently released the shot and watched it in the scope, the pellet struck him in the head, passed through and created a small splash as it impacted the dry ground behind. The two squirrels behind soon scarpered, leaving number two lying where he was hit. He went in the game bag and I parked up, still wondering if this could be the bumper day I had never really had?

The sun was shining through the trees and the song birds were out in force. There were woodpeckers, thrushes, and nuthatches seemingly everywhere; it was a joy to just be out amongst it all. A job still had to be done though, so I continued my journey, keeping an eye out for anything that could be an opportunity. John had told me that he would like any kind of corvid, such as jackdaws, jays and crows shot, due to the damage that they do to the farm and wildlife. I had never shot a jay before, they have always been far too twitchy to get a shot off.

Today was different though. A jay was around. I could hear it. They must have the most undignified screech out of all of the animals in the wood, you can hear them from a mile way, yet often not see them when they are just metres away. I saw this one flying in and crouched down in an attempt to avoid its razor sharp eyesight. I had a tree behind me, it landed well within range and seemed to be unaware of my presence. I crept over to the willow that I was just yards away from and used it as a support, desperately not wanting to cock the shot up.

The jay was bobbing its head up and down and would not keep still. I could see where I needed to place the pellet, right in the engine room. The bird was at a steep incline and I knew it would be an ‘on crosshair’ shot. Once more I squeezed the crisp trigger on the 410 and the silenced shot solidly impacted. It surprised me how little noise it made when it hit the floor, unlike a pigeon for example. Picking it up, it soon became clear why. It was extremely light and felt like it was made of feathers alone. It seemed a shame to me that something so light and frankly, quite beautiful could be so destructive to song birds. I plucked out the brightest feathers, as these could be used to make flies for fishing and continued on.

I must have walked for over a mile and there was activity everywhere and lots more pellets released, which landed on their intended targets. This was by far the best day’s shooting (numbers wise) I had ever had. With six squirrels in the bag, I was walking along the side of a wood with a moulded potato field to my left. There was a pigeon that had flown in approximately 50 yards into the wood and was just sat on a wide open branch. I could have taken the shot standing but wanted to make the most of my surrounding environment, so settled in an unusual position sat in a furrow with my back leant on the ridge on the field’s edge. From this surprisingly comfortable and very stable position, I could place 2 mill-dots on the pigeon’s head with ease and it dropped with little drama.

With the bag continuing to fill, I was feeling good. I did miss a few though. I won’t pretend that I was on 100%. Everyone misses and on this day I missed four if I remember correctly. I continued through the coppices and the level of high activity remained. I was shooting squirrels in every patch of wood I entered. John was right, there was a heck of a lot!! I made my way up to a piece of woodland on a small hillock, the sun was getting a little lower in the sky now and I was keen to see what I might shoot on this final patch.

I was walking the outskirts anti clockwise, this gave me the best angles to shoot into the wood. I could see some pheasant feeders in the darkness of the trees and what looked like yet another squirrel. Not this time. It was a large rat. I put the gun on aim and went for a heart shot. I missed the heart and ended up wounding it, not what I like to do. Being fat and wounded it was pretty slow, so luckily I was able to get a follow up shot and put an end to it.

With the light now gone and no night vision on me, I called it a day with the final count being 10 squirrels, a jackdaw, jay, pigeon, two rats and a rabbit caught in the headlights on the drive back up the track. John was very pleased that the pheasants and feeders would have a little less trouble from the greys and he recently commented on the drastic reduction on greys in the woods. He seems sure that I am having a positive impact and that’s good news as far as I am concerned. It’s always good to hear that our work as air gunners is appreciated and makes a difference.