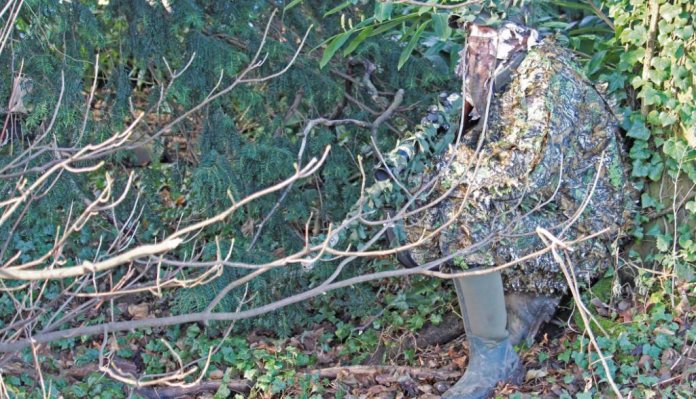 When hunting, I tend to chuck on some old army issue camo. After seeing videos and reading articles, I decided to get something a little more extreme! After a quick eBay browse, I came across a leaf suit, which looked promising and wasn’t a silly price. I paid £18 and it would be on my door step within a couple of weeks. I also needed gloves and a leaf mask. The gloves I chose were Deer Hunter Sneaky’s, one size fits all; yeah right. They came and needed some serious and immediate modification. Every other pair of gloves I own are large, but these were M for massive. The sewing machine came out and I began to make them smaller, to fit my apparently, dinky hands. With a few runs of stitches, they were ready to go.

A stich in time

The sewing machine was also required for the extremely ill-fitting leaf face veil I had also purchased. Unfortunately, this was so poor it was just unsalvageable. I guess this is the price for buying cheap! Instead of spending more money, I unpicked all the leaf stripes and sewed them onto my perfectly fitting Jack Pyke veil. I added some old camo netting to my gun and hat, I was now fully kitted out and felt as close to invisible as possible!

I was dead keen to get out into the field, to try out my new ensemble. The estate (where I had some great shooting success last year) had opened to me, as the pheasant season had just ended. The first thing I needed to do was to check the zero on the ever-reliable Air Arms S200. Not wanting to set out a mat and waste time doing it properly, I attached the rubber feet to my Spartan Javelin bipod and used the bonnet of my unlikely but versatile Fiat Panda as a rest. Setting the target out at 30 yards, I checked the H&N Barracuda Matches were hitting the mark; as usual, pellet on pellet, perfect! There was no need for any more testing, it was time for some hunting.

I rolled up to the gate and glassed the trees with my Leupold binos (another eBay bargain). I do this because it just gives me that extra bit of clarity, field of view and of course safety. Scanning with my rifle scope just doesn’t seem that wise nowadays. The leaves were off the trees, which made spotting pigeons easier. This time though I saw nothing. This was fine, as I knew there had to be something on this 800 acre + estate.

I trundled on down the wet muddy track in the little Panda and came into a wood with an opening where I park the car. There are often pigeons roosted up, so I proceeded with caution. There was a bird a little deeper in the wood, so a short stalk was required. I already had my camo on. I cocked and loaded the 200 and set off under the cover of some low trees. I felt as though I just disappeared into my surroundings, I could feel the fake leaves on my suit moving in the gentle breeze, helping to break up my outline.

Almost before I knew it, there was the pigeon; 28 yards away with a slight incline meant a dead-on crosshair shot. I went for centre mass, or just to the left to be precise, as I didn’t want to hit that hard breast bone, instead the pellet would travel through the meat, then a thin layer of bone and into the engine room. This was pretty much the only option as the head was tucked way into the bird’s body. With a tree as a rest, I squeezed the trigger and the shot was away. With the addition of my new HW silencer, the pigeon didn’t even flinch before the pellet impacted. It just rolled back, not raising a wing tip and hit the deck and I retrieved it. It’s always better when you get off to a good start, as there’s then no pressure to put anything in the bag.

Upon walking back to drop the pigeon at the car, I spotted another one that must have flown in as I took the shot or just after. Another testament to how quiet this new silencer is! I instantly dropped the dead bird and got into a ‘stalking crouch position’. I began to move in on #2. This one had its back to me and was much higher in the tree. I lased it with the Hawke LRF 400 at 35 yards, another simple enough shot. I took off the little holdover that was required and went for the head that was sticking right up in alarm.

The camo was good, but the pigeon could still definitely see me. I took it kneeling before it had the chance to fly, it was probably a little rushed looking back but it was a head shot, so I won’t lose any sleep. With some brief frantic flapping the woody landed in amongst some snow drops. I picked it up and put it alongside the other. I decided to leave that location and head over to some woods that I was told by the game keeper had a large population of squirrels eating from the remainder of his pheasant feeders. As he’s been on the ground every day for the last four months I thought it would be wise to listen!

The sun came out as I was walking towards the wood and I could feel its warmth on my back for the first time this year. It was very much appreciated, and I was thinking that the squirrels would be feeling the same. I came into the wood, it was quiet and still, so I slowly made my way down a ready-made track. I then heard some frantic scratching, as a squirrel sprinted up a large pine tree to my right. It got to the top branch and stopped, I could see it looking at me. I shouldered the rifle for an almost vertical shot. He was in my crosshair, I pulled the trigger and also the shot; damn it!

The pellet flew straight past into the fresh air behind. I re-cocked, desperately not wanting to make the same mistake. The squirrel was frozen in the same position, this time when the shot was released it came tumbling down to my level. I picked up my quarry, thankful that I had another opportunity and moved on towards the feeder that promised to have some activity.

I stalked through the wood and could see the feeder through a gap in the brush. Looking through my scope, I could see movement. Sure enough, they were feeding. I crept over to a tree covered in ivy, which I would use for cover and support. At a lased 50 yards, it needed 2.5 Mil-Dots holdover. There were two squirrels. One was perfectly still at the feeder, so I went for the easier shot. I fired, the pellet flew and struck the top of the head. It began to thrash around, which caused its mate to scarper to a nearby tree, where it froze.

With a quick reload, I was on him, it was only six feet off the ground, its head was nearest the floor with the grey’s wispy tail in the air, it knew I was there somewhere but couldn’t quite make me out, due to the ivy cover and my camo. I guessed it to be 35 yards, placed the crosshair on its shoulder with the ½ a Mil-Dot on its head. The dull ‘pop’ of the muzzle sounded with the louder ‘crack’ of the pellet striking the side of the head. It too fell to the round and started thrashing around the woodland floor.

As the day went on, I stayed put, managing to bag another squirrel off the feeder and a couple of pigeons as they came in to the trees above. I would have stayed all day but had been instructed to make my way out of the woods by three O’clock, so as not to disrupt any of the roost shooting that had been arranged for the weekend to come. With a reasonable bag, I was very happy to call it a day.

As far as the camo is concerned, it was fun to try something new and I was happy that it performed at least as well as my old British Army DPM. It was cheap and only time will tell how hard wearing it is. To the human eye, there is no doubt that it blends into woodland surroundings exceptionally well. How much difference it makes to hunting remains a matter of personal opinion. But no matter what you spend (whether it’s £18 or you put a nought on the end) no amount of money can ever replace the skill of stalking and concealment. This can only be learned, and you can’t put a price tag on that!