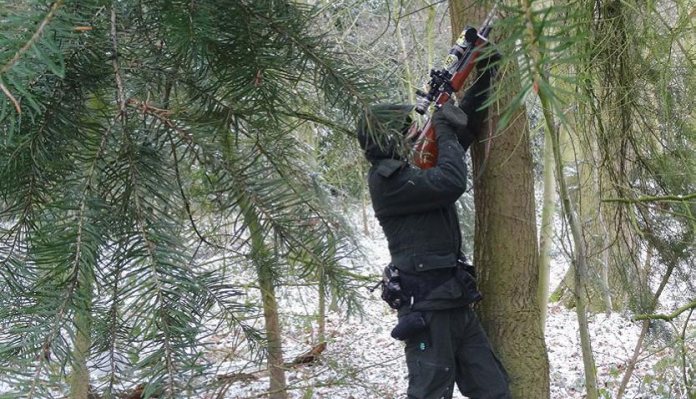 Almost all my ‘big bag’ days have been helped with the knowledge of one man; the Gamekeeper! Often, I will be sitting at home and he’ll ring me telling me that there are large pigeon, squirrel or rat populations in certain woods, fields and farm yards. This shoot was no different. He gave me a call and informed me that while he was checking the traps early that morning, there was a lot of wood pigeons on the other side of the wood. He said, they had been feeding on the rape at first-light and then moving into the trees for a roost before heading back down to feed. He then explained the best place to go and I set my alarm for the next morning. I set out all the kit I would need for the cold early hours of the day. My clothing consisted of my new Ridgeline Torrent Euro II Jacket, Pintail trousers and Igloo fleece. The forecast told me that it was to be the coldest day of the year, so warm clothes were essential.

I woke the next morning at 6:00. It was still dark outside, but I knew that by the time I was sorted and in the woods the sky would be turning a brighter shade of blue, or possibly, grey. Within half an hour, I was there. The temperature was a brisk 7° below as I parked the car and sent pigeons scattering out of the ivy-clad beach trees, where they had been spending the night. They were very well concealed, and I would need a thermal camera for any chance of even spotting them.

I threw on my jacket and loaded up the Air Arms S200 in case of a shot on the 300-yard walk to the woods. I set off, being sure to hug the tree line on the outskirts of the field, to help give me some cover. There was a rabbit sat out in the field, too far for a shot but I tried to lase it to see how far I would need to stalk. I fumbled around for the range finder, my hands were already very cold, even with my shooters mitts. If there had been any wind at all I think I would have called it a day, there and then. By the time I had located the Hawke LRF, the rabbit was gone; so, not a great start to the day! I needed to make sure the range finder was in a more accessible place for next time.

I came to the entrance of the wood and paused to have a look around in the tree tops, to see if I could spot any early targets. It seemed bare, so I continued to my premeditated shooting spot. Meandering through the four-acre wood, I soon realised that it was far from bare. The pigeons were all sat up in the thick, covered pine trees that were dotted around. Each one I came to, at least eight birds would fly out, I had no chance of spotting them but made a mental note for a later date. It may be worth roost shooting one of the evenings with the air rifle.

I arrived at my spot and the waiting game began. Behind the wood, I spotted the rape field that was holding the pigeons. The game keeper certainly wasn’t wrong!! There were hundreds feeding and circling a few feet above those on the ground, gorging themselves like a grey cloud. All I had to do was wait until they all got up and flew into the trees above for a rest. I didn’t bother setting up a hide or even bringing a bean bag, as all my shots would be standing. I wanted the freedom to be able to move around without the added hindrance and disturbance of getting up from a seated position. This also allowed me to use the trees far easier as rifle rests and supports, making shots relatively simple.

I was waiting for just over 20 minutes before the first opportunity. The birds all got up from the field at once. I got in close to a tree to stay out of view. I had never seen this many pigeon in a location where I could shoot them. The sound of them, as they came over the top of me to land, was brilliant. The wind under 500 or more wings sounded like nothing I had ever heard. I waited for them all to land before taking a shot, as I didn’t want to rush and startle them off before they had settled.

I also didn’t want to take too long, as their great numbers meant more eyes could spot me and once one flies, they all go. I picked my bird. It was high above me and I could only see its chest and rear-end. I went for a chest shot. I was using the heavy H&N Barracuda Match pellets and figured it would do the job. I aimed slightly off centre and the shot was gone. The pellet travelled straight, narrowly missing the dense branches. The sound of it striking the pigeon sent the rest of the birds on their way. My target flew but I could see it wouldn’t be up for long, so I watched it intently. It clattered into a nearby tree, had a slight wobble and then tumbled to the ground. The pellet must have struck the lungs. Birds will often fly short distances before expiring when hit with a lung shot. I marked where it fell, so I could pick it later.

Another 20 minutes or so went by and my toes were freezing. My hands were okay, due to the hand warming pockets in my jacket. My body and legs were fine though, so I continued to wait. I can hack cold toes but hunting when you’re cold all over is no fun at all! Another flock of birds came into the trees above me, after a crop feeding session. They were in a similar location to the last crowd, so I went for a similar shot again (aiming for the heart and lungs). I used a tree to give some added stability and again, tried to thread a pellet through the tangle of branches. Not this time though; it cracked into a branch and the pigeon was unharmed and unaware, allowing me another shot - a fabulous benefit of using a silencer!

I moved my position slightly and fired again. This time the pigeon dropped without any fuss and landed almost at my feet. Six or so birds cleared off, but one stayed behind. It was a few trees to the left of me, but the angle was still the same. This one was facing away. I shot it so the pellet would either travel up through the spine providing a humane kill, or into the heart and lungs. It fell directly from where it was sitting and impacted the brambles below with a bit of a crash.

Time went on, I killed one more and missed a few too, mainly due to clipping branches that I just couldn’t see. Four birds were now on the ground. I had been standing in the wood for 3-hours and was starting to think about heading back to the car. Before I had chance to pick up the shot birds, a lone pigeon glided into an isolated tree 35 yards from me, the other side of a brook on the outskirts of the field. I could see it through the fork of a closer tree that acted as fantastic cover. This shot would have to be standing unsupported, because if I moved to a location where I had a rest, I would probably spook it and miss my chance.

I gave the bird a half a mill dot hold over and was very aware of the branches my shot would have to pass through I aimed for the neck, I knew that it had been feeding on rape, which is very soft in its crop. If this was Autumn and the bird was feeding on acorns, then a shot to the crop may just cause injury due to the fact acorns are very hard and great at deflecting pellets. I had the gun shouldered and I gently squeezed the trigger. With a pop, the pellet zipped though the gap in the first tree, began to drop due to the range and impacted the pigeon right where intended and it flapped to the ground. I waited a little while longer but had no luck, so picked up my birds and went back to the car.
I had a great morning - if not a little chilly! The Ridgeline jacket, fleece and trousers did a phenomenal job keeping out the cold. My body was as warm as toast and crust-dry. I can’t wait for the next outing. I shall definitely continue listening to the ‘oracle’ gamekeeper, as he continues to guide me to fantastic shooting sessions with the air rifle. All the kit and ability count for nothing without knowledge of the right location.