Airgun Hunter: Rude Not To 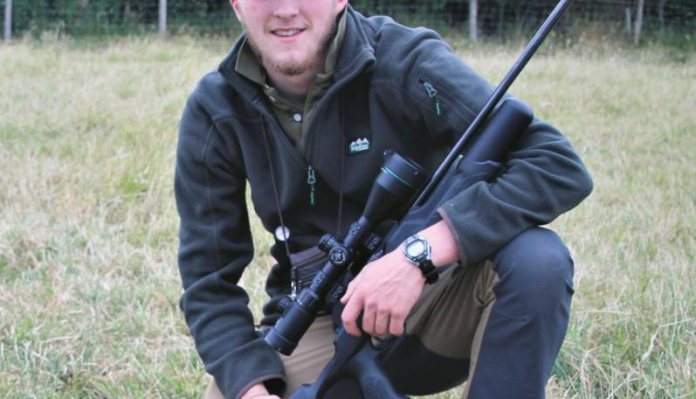 One thing which is guaranteed to brighten my day, is receiving delivery of a new rifle. I cut open the neatly presented box and revealed a Walther RM8 dressed up in a little black number. Synthetic stocks are generally not my first choice of furniture, but as I had I kindly been sent this rifle, it would have been rude not to take it out to see what it could do and see if my prejudice had any basis other than aesthetics. On paper, this budget rifle packs a lot for the price and I was keen to find out if it was all it was cracked up to be.

The following day, I kitted up and headed out to the field for a zero. The scope on top was the PAO 4-16x56 bolted on with Sportsmatch mounts (a nice combo for pest control). The good people at Bisley (distributer) even threw in a Walther silencer to mute the bark of the muzzle. This rifle was in .177, so 25 yards would be the ideal range for me to set up a target. The trajectory of the pellet means that at this distance no hold-under is needed at any range, which takes some of the thinking out of it for me; That’s never a bad thing!!

I had a few shots and first impressions were good. The gun felt nice and grouped decently too. I noticed that, similar to the LGU, the trigger could do with some work. There was far too much creep for my liking, but I soon got used to that. With a few adjustments, the gun was on it. I broke from my prone position and moved the target back another 20 yards, this would be a real test to see what it could do and if it was hunt worthy. I held over what I thought would be right and fired a few shots. Not bad. All within a 5 pence piece, admittedly, not on target but with some calculation alterations they soon were. With a mental reticle map firmly established, out to 45 yards, I felt it had to be blooded in. I had noticed that on one of my permissions the magpie numbers had risen and could do with knocking back. I drove half a mile up the road, to see if there was anything about.

When I get to the permission driveway, I always wind the window down and get everything ready and placed exactly where I need it to enable me to get an opportunistic shot off as smoothly and swiftly as possible.

So many opportunities have arisen, which I have managed to seize, due to being well prepared. A small amount of prep can save a great deal of frustration. It’s often a pigeon which is the first in the bag, but in this instance, it was a rabbit hopping out of the verge.

As I came to a halt, the car’s brakes squeaked, announcing my presence. ‘Thanks for that!’ The rabbit was out of range. I edged a little closer till I got within that magic 45 and let the car roll to a stop. The wing mirror proved to be a very comfortable rest and allowed me to have the confidence in making a clean shot. 1.5 Mil-Dot of hold over on 10x was the ticket for this shot. Gently I squeezed the not-so-crisp trigger and the silenced pop of the muzzle was followed by the reassuring ‘smack’ of the pellet striking the skull. The rabbit rolled but I wasn’t convinced it was lifeless. I re-cocked the rifle, the 8-shot magazine cycled flawlessly and landed another one for good measure. It was quick and did the trick. I continued driving down until level with the bunny before hopping out and lifting it out to check the results of my head shots. Maybe it was dead the first time, maybe not? I will never know but for the small cost of one pellet, it paid to be on the safe side. A rabbit hit can never be too dead.

With one now in the bag, I figured that the best use of the rabbit might be as bait for targeting the Magpies. I didn’t have a hide net, (poor planning on my part) so I’d have to rely on fieldcraft as concealment. I placed the rabbit out in open view of any passing corvids. The Leatherman ‘Wave’ is a great multi-tool and has many applications; this time I used it to slice open the belly of the rabbit to spill the guts in an attempt to make the carcass look as appetising as possible to the black and white vandals. I intentionally set the rabbit and a plastic bird decoy at 25 yards, to avoid any extra calculations.

With the bait set, I tucked myself prone, under a hedge. I would be out of sight from birds flying over and I had a good view of the bait. I waited there for quarter of an hour. A magpie flitted in and began strutting around the decoy, trying to suss out what was going on. It then stopped, cocked its head to one side and seemingly ‘clocked me’. By that point it was too late. In that split second, the Air Arms pellet was already in flight and connected with bird’s rib cage and then into the heart and lungs. It flopped forward without a twitch and lay still in the grass. I sat tight. So many times, I hold back to see opportunities present themselves.

I heard some screeching and chattering in the distance, signalling that they knew something was up. My head was behind the gun, ready for any more chances. Another Magpie dropped in, it landed on a fence that was protecting a sapling. The distance was a little further, perhaps 30 yards or more. Using my experience, I held above what I thought was right, half a Mil-Dot, give or take. It was jumping around from one side of the fence to the other. I had to be patient - rushing can easily cause shots to be missed altogether, or worse still, birds can be wounded and take to the wing.

He was chattering away, calling more of his mates in from surrounding woodlands. There were now multiple targets to choose from, they just seemed to keep appearing! One Magpie had joined its mate, sat in the tree. It seemed to be pretty steady and the most likely to go for. I pegged the right aim point on its head and without wasting another moment squeezed the trigger. The pellet hit the intended spot and sent the bird tumbling. It must have hit every branch on the way down and rested at the base of the tree.

The rest of the birds scarpered, and I had just about had enough of lying in the grass. I broke cover and stuck to the hedge lines. Thankfully it was dry, my boots were still intentionally sat outside the backdoor and trainers shod my feet. They are good for this sort of thing because they are light, and the foam soles make them very quiet, especially when walking on stones and other hard, unforgiving surfaces. The stealth of the trainers was clearly an advantage when I noticed some twigs from inside the hedge moving.

There was too much movement for any small songbird, which meant one of two things; either a corvid or Squirrel; I was happy to dispatch either. Hastily, I made my way over to a solid rest, which happened to be a fence post that followed the hedge. Once more, the waiting game began. It was only a matter of time for whatever it was to show its head. The gun was getting heavy, even using a rest. It took a good two minutes or more to show itself and it was a magpie; probably making its way through the branches looking for its next meal.

All this time my gaze was transfixed though the scope, waiting for that golden opportunity. It had no chance and no clue I was there all that time just 20 yards away, patiently watching. A crack sounded out as the pellet split through the skull and left the opposite side. The Walther was certainly exceeding my expectations on this shoot. Happy with the bag and beginning to lose the light, I began to walk back after picking the last magpie.

The icing on the cake for this outing was one final Magpie during the drive back. It was scavenging through some sheep muck. Yet again, remaining prepared when on the land in the car, paid dividends. The gun was great. The simple magazine made reloading a breeze, when a follow up shot was needed the quick cycling bolt action made little work. As regards the stock; There may be practical advantages to synthetic, especially if shooting in poor conditions but for overall balance, sheer looks and the joy of it, I still love wood.