Airgun Hunter: Shooting from a 4x4 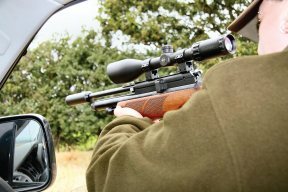 The majority of airgun hunters and definitely rimfire shooters who have the opportunity to drive on and around their permission in a 4 X 4 do so in search of rabbits. Well, that’s exactly the intention I had on this occasion when I ‘hit the ground running so to speak’ with what at the time was BSA’s newly launched and quite revolutionary designed ultra-carbine – the very fittingly named Ultra (MS) multi-shot PCP.

The original Ultra was far removed from the present day model as it used what the company then termed a ‘Drop Lever Loading’ system and ‘Micro-Movement Cocking’ mechanism (MMC). The first ‘actions’ primed the rifle (cycled the 10-shot magazine/then direct loaded the pellet into the match-grade, hammer-forged tube and then by depressing the front position ‘cocking knob’ a minimal amount of movement was needed to ready the Ultra (hence the MMC denotation) and you were set for a shot.

However, that’s history as the rifle now uses a more conventional rear mounted cocking bolt and has been up-graded with many more modern features. From here on in I’ll leave the mechanics of the rifle as this isn’t a ‘flashback field test’ but I do feel a basic and brief background of that particular ‘landmark’ air rifle relevant to this piece because back then it was so effective at the job it was designed for it quickly became a regular passenger in my ‘4by’ when I ventured onto land I had allowance to do so.

Initially this trip was intended to be like many others before – that being I’d follow my usual ‘modus operandi’ of slowly ‘trundling’ approximately 30 yds out in the field but keeping alongside the hedge lines that were riddled with holes that lead to established warrens. Thus in effect using the vehicle as a mobile hide. And with the BSA Ultra MS safely resting across my lap while waiting in a static position or more often than not lodged between the side passenger seat and centre console to my left meant it was never far from reach when required.

However, as so often can be the case this particular trip out didn’t go exactly to plan as the rabbits had decided to stay underground with the first few hours of me stopping regularly alongside several known ‘hotspots’ proving to be fruitless. Thankfully my fortunes changed when I decided to move further along the large expanse of fields at my disposal. In this case it was an area where I could cruise down a couple of the recently cut stubble fields that lay further along this particular shoot. I was still hopeful I might spot a bunny or two sat under a hedge or slightly out in the field feeding. However, that wasn’t to be!

I eventually drove up and over a slight rise of a hill whereupon I disturbed a large flock of wood pigeon feeding on the stubble ahead which of course all immediately struck up to scatter in several directions with more than a few heading for trees that bordered the field to my right. I slowly drove over to see if the birds that’d headed for the trees would tolerate the vehicle close enough for a shot. They’d seen and become very tolerant of farm vehicles working the area the week previous so they should to some degree tolerate my presence - it was a just case of how much!

As I reached the area I’d seen the woodies head to in the trees, I took the Ultra from where it was snugly sitting angled down in the passenger foot well and readied it for a shot. From my now static shooting position I could clearly see two woodies hanging on the very outer branches of a large beech tree. Using a window mounted shooting bag for a comfortable support I slowly raised the compact rifle to carefully place the crosshairs on the closest woodies head, depressed the cocking knob and squeezed off my first shot of the day sending a 10.9-grain .177 calibre Bisley Magnum on its way resulting in the woodie targeted crashing to the deck. With a clatter of wings the other previously hidden birds left the trees so I decided to quickly nip out to retrieve the woodie and having disturbed the area I knew it best to move on and try the fields further down the hill.

With the un-cocked Ultra now resting across my lap I proceeded to trundle the 4 X 4 slowly down the slight incline eventually coming to a reasonably wide gap in the hedgerow where I could clearly see the freshly cut grass field on the other side. Still half expecting old bugs to be sat somewhere along this run, instead I was surprised to see a crow with its heed down seemingly oblivious to my presence. As I slowly pulled up I waited before even sighting in on the crow to ensure nobody was in the vicinity and also watched as it pecked and dug furiously into the grass for insects, worms and other grubs. Despite what many think they’re not just meat eaters and have quite a varied diet.

This was a much longer shot but I couldn’t risk moving any closer as not only would the crow more likely high tail it, but due to my angle of travel, I’d effectively lesson the size of the gap in the hedge I was able to shoot through. Slowly lining up the shot resting on the window bag I judged the range to be approximately 46 yds - not the easiest but the compact dimensions of the rifle didn’t have me struggling to attain a solid and comfortable shooting position.

I placed the cross hairs barely an inch over the top of its head and with a slight squeeze of the trigger the crow just fell over like a knockdown target sprawling with one wing outstretched stone dead. As I left the motor for a second time and made my way over to the downed bird to retrieve it the skies were beginning to darken and it began to drizzle slightly. As the ground in this area can quickly become waterlogged and for the unsuspecting be a mud trap for any 4 X 4 the wise thing to do was to acknowledge this heralded the end of a rather unusual ‘drive by…’ But the woodie and crow taken proved the BSA Ultra MS was not only a superb rifle for this type of shooting but if you have the opportunity to shoot in this manner – then it’s not only rabbits that can fall foul of you using an off-road vehicle as a ‘mobile hide…’