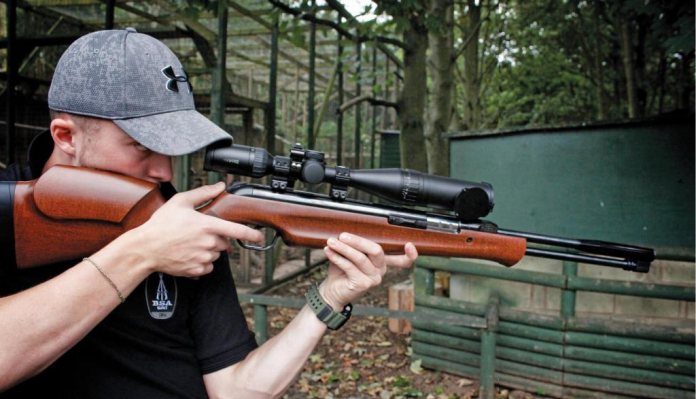 There are many great spring guns and I have been lucky enough to have owned a few! I was recently sent a Walther LGU to use and I’ll admit I was a little sceptical, as it looked like Walther had cherry picked aspects from the TX200 and the HW97 and made their own variant. However, my interest in the LGU started to build when Germany’s Jan Henrik Homann took one to victory in the spring piston class for the 2017 WFTF in Wales. So, I was more than happy to see what it offered.

This is not a light rifle and I would defiantly need my three Weetabix before a day out in the field with this bad boy. Weight is often a good thing for springers, as it allows them to sit well and recoil naturally. However, if you can’t handle lugging it around all day then it’s not for you! However, it’s something you get used to and if a heavier gun is no stranger, shooting with this model should be no problem.

But first, zeroing. A Hawke Airmax would be my glass of choice. I bolted it on and used the arrestor pin provided with the Sports Match mounts to ensure that there would be no scope creep and placed my target at 25 yards. Most apparent was the smooth cocking stroke, with no noise from the spring or other moving parts as I cycled it. I was prone, with the forend rested on a soft bean bag cushion to allow the recoil to do as it pleased. I squeezed the trigger and the shot was away.

I wasn’t overly fussed where the pellet landed at this stage. I was more interested in how the shot cycle felt. I played it back through my mind. The trigger could do with some work, compared to the CD unit found on the Air Arms and the Rekord on the Weihrauch. The first stage could have been a lot smoother and the creep on the second was initially unpleasant. This was not something I expected from a rifle in this league. I did some research on this and discovered there is an aftermarket adjustable trigger available to buy from Walther, which will hopefully do the trick. It would have been nice as a standard though.

The rest of the process left me ‘wowed’! What an impression! The bad trigger trouble was soon forgotten because when that gun went off, it was the smoothest model I had ever shot out of the box, by a long way. It really did shoot like it had been tuned. The recoil was minimal, the soft adjustable butt-pad just nudged the shoulder with muzzle flip being non-existent (probably partially thanks to the hefty silencer/muzzle weight on the front end). I fired more shots, eager to get it zeroed, so that I could head out into the field for some hunting. Needless to say, it was as accurate as it was smooth; ideal characteristics for some spring action pest control.

I arrived at one of my favourite permissions, one that I was almost guaranteed not to blank. They have lots of animals here, most of which you don’t find at any ordinary farm. Visitors come and feed the animals with food bought from dispensers. As this farm is a well-known, popular, local family day out, the opportunity of feeding the animals is handed to the children. That’s all well and good, but from what I have observed, only a percentage of it feeds the animals as intended. A fair amount ends up spilled on the ground, providing a wonderful feast for some of the less welcome farm guests.

I decided to just go for a walk and stalk round the property. The evenings were starting to draw in and it was already late in the day, so I needed to get on with it. I started off in a location that probably has the highest number of pests. It is where the larger animals, like the sheep, lamas and ostriches are kept. I would guess that the high pest numbers here are also down to them spreading the food around. With many of the smaller animals, including the birds of prey, their food is given to them precisely and it is very rare that any gets wasted but not with the larger species, as it’s often sloshed out of the troughs and onto the ground, making an ideal feeding site for corvids, pigeons and rats.

I sat myself down in an area where I had a good view of some ‘sitty-trees’ and the trough that fed the animals in the main field, which had provided some good hunting in the past. I had only been out 15 minutes and already the LGV was starting to weigh a bit and without a sling, I decided a static hunt would be enjoyable.

Thankfully, before much time had passed, a very young magpie flitted down from a thick leaved sycamore and came to rest on the fence, just above the feeding station. From my position, I couldn’t risk a shot, there was a car park behind, obscured by a hedge and even though the park was closed, I couldn’t take the risk. I needed the bird to drop onto the feeder or onto the grass. As suspected, the temptation of a free meal soon became too much; it glided to the floor and began strutting around, as they often do. It found some grub and began to tuck in.

I knew the gun was zeroed at 25 yards and that it would need some holdover for this slightly longer 36 yarder. The familiar AMX ret’ allowed me to precisely hold ¼-mil-Dot above its chest, as a head shot was off the cards, due to the constant pecking. With the same pressure as when I was zeroing, I squeezed that trigger that I had somewhat got used to. The creep that I experienced earlier that day was still a little irritating but at least it was predictable. With a minute addition of pressure to my index finger, the pellet was away. When it struck the magpie, it was like all the muscles in its body tensed up, its wings drew tight into its body and it keeled-over, belly-up on the grass.

A passing crow soon spotted this, as they often do, and swooped down for a closer look. Unlike my HW100, where just a silent cock of the sidelever was needed, this took a bit more effort and a whole lot more movement. I decided to use the crow’s focus on the dead magpie to my advantage, I ducked behind a nearby shed and cocked the LGU as quickly as I could, and I did it silently by pressing in the anti-bear trap lever to stop any clicking as it passed over the steep edges of the grooves. I loaded a pellet and slowly re-emerged, hoping the crow was still be there. It was. With the bird’s gaze still transfixed on the magpie, I positioned myself so that I could rest on the fence next to the shed. The crow called out in alarm one last time, before the 8.4-grain pellet impacted its skull for a swift dispatch.

I left them where they lay and just stood there in the hope for another opportunity. From behind me, I heard the scraping and scratching of bark. It was the unmistakable sound of a squirrel. I spotted it coming down a pine tree behind me and positioned myself for a shot. In a dash, it reached the thick undergrowth and was out of sight. I could still hear it though and it sounded like it was getting closer. Suddenly, it emerged at the edge of the path and kept coming towards me, any closer and I wouldn’t be able to see it though the scope. I let off a slight squeak and it stopped dead. If it wasn’t aware of me before, it was now. Before it had chance to realise I was bad news, it was dead.

It was no more than 6 yards, so a fair bit of adjustment was needed. I couldn’t tell you exactly how much, I just used ‘experimation’ and pulled the trigger, which is my word for a good mixture of experience and estimation in unusual situations, which creates a confidence that feels right.

The evening wore on and I managed to terminate a rat and jackdaw, to go alongside the other three. It was most definitely a successful outing. For the first time out with the LGU, I couldn’t really have been happier. Will it (or any improved version) ever be considered among the great springers? Time will tell. The way it handled for me straight from the box was just superb and I’m looking forward to more testing and hunting with this fine springer in the future.