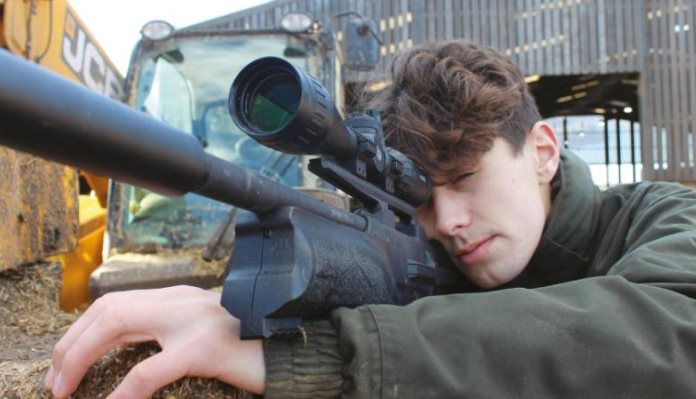 It had been a few months since our last visit to the dairy farm and the feral pigeon numbers were starting to grow once more. So, it was time for another trip out with Tom. This time, we would be using a gun that was fairly new to us, the Walther Reign, multi-shot PCP. I also took the Walther LGU, just for some springer action. When the Reign arrived, I was surprised at how light it was. This was pretty much my first proper experience with a Bullpup, as I had played with them in the past but never used one to any serious extent.

With Bullpups being a foreign shape compared to the guns I am used to, I wanted to keep at least one thing familiar. So I fitted the old scope I always use, the Hawke Airmax 4-12x44. This is my go-to glass and I have had many thousands of shots looking through the crystal clear lenses, which has to count for something!

We set off and 30 minutes later we were on the farm. At first glance, there didn’t seem to be the activity of previous occasions. First things first, load up the gun. The Reign’s magazine can be inserted from either side, making this rifle ideal for lefties as well as righties. In addition, the cocking leaver can be also switched over if required. Both Tom and I are right-handed though, so we let it be. With the mag filled, we slotted it into place and slid forward the cocking leaver, the process was quick and easy. I was pleased with the simplicity of the feed system and, to my eyes, the mechanism was not dissimilar to BSA’s tried and tested arrangement.

We flipped a coin to see who would shoot first; I won and elected for the Reign. I used the thumb hole to carry the rifle muzzle down, it was nice to have a gun so short that

I had no worries of knocking the barrel. I carried it a bit like a briefcase, as it was about the same length! I will just add that we zeroed the gun back at Tom’s place to save time before we left for the dairy farm.

We rounded a corner and there was a pigeon sat on top of one of the cattle shed roofs. I slowly and deliberately raised the gun to my shoulder and rested it against one of the steel supports of the building.

I guessed the range at 30 yards; it wasn’t far enough to warrant the laser range finder. I lowered the crosshairs from the head, down to the heart and lungs and squeezed the trigger. While the pull was not as crisp as my HW100 (as expected) it was pleasant to use, and broke cleanly and consistently and was better than my expectations. With confidence that the shot would release predictably, I added pressure to the blade and the pellet was away. The Walther silencer did a decent job of dubbing down the muzzle report, the pigeon dropped without even hearing the shot. One in the bag.

We were off and running and now it was Tom’s turn to shoot. As we entered the shed, we were met with the sight of tons of white ferals lining the girders. We decided it would be best if we teamed up on this one as we had done before, taking our shots simultaneously. I had more experience than Tom, so it would be silly of me to force the harder to shoot LGU on him. There are obvious disadvantages to using a springer in these situation. For a start, they take three times as long to reload than a PCP. They create more noise when reloading and shooting for that matter and a lot more movement is likely when reloading, which could spook quarry if a second shot presents itself.

However, there is a certain satisfaction with making a good shot with a springer. They take a lot more skill, effort and time to master and they can make almost anybody a better shooter, as they expose poor technique more than a PCP will. We selected two birds which were sat pretty. Tom lined up on his and I followed. They were almost directly above us, so a little bit of hold under was needed to allow the pellet to rise up into the target area. I whispered down from 3, 2, 1, we both fired. The two rolled off their perch and landed at our feet. It was now game on. The rest of the birds didn’t flinch. We reloaded and began the process again.

Tom seemed to get on well with the Reign, they kept coming and we just kept dropping them. While we were having some great shooting, it wasn’t as good as it had been on other shoots. Perhaps it was because we were doing such a good job. I later found out that another guy had been shooting here a couple of days ago and had a pretty decent bag. Still, we were doing great, if we had nothing to compare to, this would be a red letter day.

The LGU was performing well. The nudge on the shoulder of each shot was enough to remind me to really concentrate on my technique, to not hold the gun too tight but to let it recoil in its own way and do its own thing. That’s the way to get the best out a springer. It was nice to see both guns work side by side, old vs new (technology wise). I couldn’t say one was better than the other. Different stokes for different folks and certain guns do certain jobs better than others. In this situation, though, the Reign had the upper hand, being that much lighter and quicker to reload. I was also a lot more aware of not knocking the beach stock, as I opted for the plastic, which can take a little rougher and tumble without the worry of cosmetic damage. There are pros and cons for both. We just loved shooting them.

Tom lined up a lone bird, which sat with a steel plate to its back and watched as he steadied himself against one of the steel cattle fences in the shed. He took his time and waited for the perfect opportunity. I could see the time was right and he fired; for some reason the pellet rose high and wacked against the girder. Who knows why, a poor shot or just duff ammo? He reloaded, the pigeon luckily sat tight, clearly used to loud metallic noises with all the clanging and banging in the farm. He collected himself, and got back on target. There were no mishaps this time. Tom redeemed himself with a perfect head shot. The pigeon flapped and tumbled to the ground and continued to flap for a few more seconds before coming to rest. A typical head shot.

The birds were starting to get smarter and weren’t hanging around quite as much. This was no surprise when we had probably shot 18 – 20. There were some stragglers though and I took full advantage. Tom handed me the Reign and I lined up for a long range 47 yarder the other side of the shed. Remembering the range map we made back at home, I knew I would need two mill dots hold over on x10. I scoped up the bird and decided to go for a heart and lung shot. They are a much slighter build than the wood pigeon and drop far easier. If we were shooting woodies I would mainly be aiming for neck and head shots, just to stay on the safe side.

With being in a shed, there was no wind to think about for once, which was a real blessing. I once again pulled in the trigger and waited for that now familiar break. The sunlight through the wooden slats in the shed caught the backend of the pellet and I tracked it as it flew through the air to meet the pigeon on the other side. A deep, meaningful thud followed and then, the sound of the bird hitting the deck.

We normally get a variety of birds on this farm, Jackdaws, Rooks, Crows and Woodpigeons are not uncommon and we often build mixed bags but not today. Maybe it was just the weather. Both guns were great and did themselves proud. Next time though, I will definitely be bringing two PCPs. The LGU is great for woodland walking and rabbit stalking, where odd shots are being taken but for this, it was a little too slow on the reload. The same goes if I was ratting somewhere where a lot of shots were being taken. The Reign was pretty well faultless. It was accurate and the reload was quick. It didn’t run out of breath, in fact, we didn’t even use a quarter on the gauge.

What poor weather and ground conditions we have had recently. That is one great thing about shed shooting; it’s always doable, whatever the weather. Next time, we are planning on a rabbiting trip with the night vision; I’m looking forward to that. Hopefully, the weather is kind, but I may be asking too much.