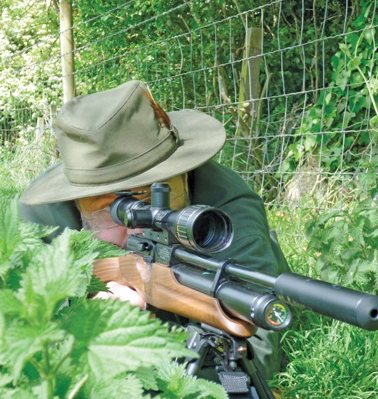 A lady at work was moaning about the rabbits on their farm, so I said that I might be able to help, which is just the sort of thing to cheer my day! I say this as picking up any new hunting land is always a good result. But as always safety first!

A new permission is always great news, but before I got too carried away I needed to make contact and visit to check it was a safe place to shoot and agree the ‘house rules’. As it turned out, it looked very promising; fairly square 200 acres surrounded by arable fields. However, of great importance was to note the public footpath that bisected the land. It’s not only crucially important to be safe, it is also important that we are seen to be safe too! Nobody wants to see down the pointy end of a rifle whilst walking their dog! I would be giving the footpath a wide berth.

We had agreed when and where I could shoot, how I was to inform her of my presence and if she wanted any of the spoils. Anytime, anywhere, by text and ‘no not really’! That won’t stop me taking a nice rabbit pie over there though for her family…) Talking of family, I also noted she had children, cattle, chickens, cats, horses and dogs. More wide berths!

First shoot visit arranged and it was time to pack. Usually there are quite changeable ranges on this type of shoot, so it was .177 of course. I can’t control the wind, but I can control my hold over/under and windage to compensate for most things as for a while now I have been using a first focal plane (FFP) scope. Here the optic has the reticule set in the FFP, which offers a huge advantage when you zoom in or out on your target.

The reason; the reticule stays the same size relative to the target, which means a rabbit in the cross hairs for example gets bigger and smaller as does the reticule. The real advantage over a second focal plane (SFP) set up is that no matter what magnification you dial in your drop values (turret clicks) stay the same. For me that means that 38 yards is half a Mil-Dot hold over on any and all magnifications; just what you need in the field. So, my super quiet and accurate Weihrauch HW100 multi-shot PCP with light stream 4.5-14x 44 scopes on top was my setup of choice.

A couple of mags full of batch-selected JSB Exact pellets and I was good to go. Well, once I had also packed knife, plastic bags, torch, head-torch, gloves, spare ammo, rangefinder, wind meter (anemometer), hat, phone and camera, that is! I had decided to arrive about 6pm and walk the hedgerows, picking some good-looking spots to lie in wait. After all, this was going to be a breeze as ‘there are hundreds of rabbits all over the place, hmm…

Having parked in the agreed place, I measured the wind and remembered again what 10-12 mph felt like on my face. Sadly it was blowing from directly behind; not good at all! I would have to head to one edge, walk the length of the shoot and then I may stand a chance of approaching something with the wind at 90° right to left and again up the other side with the wind in my face.

With no, rabbits in sight - even distant - I set off. As I walked I looked in all directions for signs and actual critters, plenty of those but no animals! I was constantly making mental notes of the wind speed and direction and calculating the hold to compensate. Always best to be ready!

Wind may be tricky, but at least you only need to remember one hold. For my 8.4-grain pellet shooting about 11.4 ft/lbs; 10 mph from one side is 1 Mil-Dot at 20 yards, not exact but close enough if you are guessing wind speed, something I did not need to do as I have the anemometer. But if not a good rule of thumb is 10 mph is about when the twigs on the trees are moving and if just the leaves then it’s around 5 mph. Remember this one hold and the rest is just simple maths. 20 mph is 2 Mil-Dots at 20 yards and 10 mph is two at 40 yards. Rough, but accurate enough! If the wind is at 45° then it only has half the value, for example 10 mph at 45° is half a Mil-Dot at 20 yards.

I would say however to less experienced hunters to practice as you do need to know how to shoot into wind and practice makes perfect. It’s nothing to be afraid of, but conversely you need to understand how to compensate properly as a clean kill is always paramount!

A SIGHTING AND YET MORE PREPARATION

By now I was creeping along with the hedge on my left and the wind from my right, slowly approaching a solitary rabbit. Obviously not enough as he made off! I watched where he headed into the hedgerow and set myself down, prone, about 30 yards away hidden as best I could with a safe backdrop. I waited, 20 minutes is usually enough and sure enough out he came. Whilst waiting I had noted some different distances from 20 (I should be so lucky) to 40 yards. He came and sat smack on my zero distance of 30 yards and the wind was next to nothing this near to the hedgerow.

Crosshairs just behind the eye and – what on earth is that fuzzy green stuff? He had parked behind some nettles. A clean shot or nothing, so I waited. He munched his way another 10 yards away from me and then turned to offer a lovely target. Just over half Mil-Dot holdover for distance and half for the wiff of wind from 3 o’clock just causing the grass to move at his feet. Ffft donk, excellent! If he had gone another 5 yards I would have left him alone, as even prone off a bipod and in good conditions, 40 yards is my self-imposed limit when hunting. Maybe if I cleared every HFT course I did I would go a little further, but I don’t! I’m a mid 50’s shot, so 40 yards is the max.

Now gutted, he accompanied me around the rest of the shoot but, apart from a distant hare, I saw nothing else. Back at the car it was now just after 9 pm and I still had to skin him when I got home. Quite a few hours for one rabbit, but one was enough for that rabbit bolognaise sauce recipe I had been reading earlier in the day. Mmm.