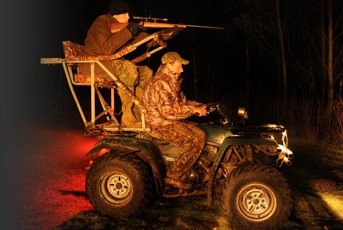 To call lamping a sport might not be strictly speaking correct as it is more accurately described as vermin control, however there is no doubt that it can be thoroughly enjoyable. Not only does it go on all year round but it also has the added benefit of being available free of charge, many landowners more than happy to accept any assistance they can get to keep fox numbers at bay.

However before you reach for your .338, a torch and a map of the nearest farm there is much to consider before you can even get to the stage of opening the farm gate. First your firearms license (FAC), you need to have a rifle approved for the purpose, and by that it must state as one of the conditions on your ticket that it may be used for vermin control. Bear in mind that there is a degree of variation in what calibres will be granted for this need across the counties! However, you won’t go far wrong if you aim for one of the .22 centrefire calibres such as .222, .223, 22-250, or .243 and even 25-06 though we will talk further about that in detail later.

If you already have an FAC then the chances are that getting a suitable rifle added or even a use variation should be fairly straightforward. The tricky bit comes when we get to finding land suitable! Again there can be some variation on what seems to count as ‘suitable’, but if you are looking to get permission to shoot foxes with a .243 on your two acre paddock in the middle of a village next to a busy main road then the best of luck to you!

For those looking to get an FAC bear in mind that you may need to serve an apprenticeship with a rimfire such as a .22 or .17 for a couple of years before your licensing team may be happy to grant you a centrefire variation.  Most newcomers are also given a condition that the rifle must be shot on nominated land. Getting an ‘open ticket’ that allows the holder to decide its suitability usually takes a few years.

The best way to proceed is to try and find some land which is already or has in the past been shot over with a similar calibre; this will be on record with the firearms team so should be easy enough to get through. Of course that depends on you being able to find a landowner willing to have you wandering about on his land in the middle of the night. Good foxing ground can be hard to come by and those who have it are loathe to ever give it up! Your best way to get into the scene is by getting to know someone already involved and go along to help them out.

Going along with someone who knows their stuff is a highly recommended course of action for the beginner. Lamping is a potential disaster waiting to happen for the inexperienced, those who may be as safe as houses on a range can quickly become lethal without even knowing it when out at night. Distance perception, quarry identification and the lie of the land must all be second nature before we can even get to the stage of chambering a round.  There have been some tragic lamping accidents in recent years and in the heat of the moment it can be easy to mistake a deer, a cat or even worse the farmer’s livestock for a fox… None of which are likely to make you popular either with the landowner or the boys in blue.

Along for the Ride

Let’s assume that you have been lucky enough to get an invitation to join an experienced shot for the evening, what can you expect?  Well firstly, don’t go thinking you will get to shoot anything. Chances are you will be there simply to observe, though don’t be too disappointed, make the best of it and learn as much as you can. Doubtless you will enjoy the experience even if you are just a spectator!

The preferred method of lamping is from a vehicle, with the most popular choice being a 4x4. You can shoot from either inside or the load bed of a pickup such as an L200 or Land Rover, though being in an open load bed can be breathtakingly chilly on a cold February night!

The usual practice is to slowly drive around the land, using a high powered lamp or torch to search for the tell tale reflection of a set of fox eyes. There are many options available, some battery-powered, others that run from a 12v socket feed, hand-held, gun-mounted and even remote controlled vehicle mounted versions are available. Likewise a plethora of filters that offer practically every colour of the rainbow, though this is a topic we will examine more closely in a later issue.

However it’s important to remember that the initial identification must be confirmed through a decent scope before any shot can be taken. As experience is gained it will be possible to be fairly confident of the species ID from other factors such as how it moves, where it has been seen, and its reaction to your presence. But even after decades of foxing it is still quite easy for the most knowledgeable of shooters to get it wrong on occasion, hence why EVERY prospective target MUST be clearly identified before a shot is taken, ignore this golden rule at your peril!

So we have spotted a target, and positively identified it as a fox; what’s the next step? Well if it’s close in and sitting still then obviously a shot is on the cards. However a considerable number of foxes may be some way out when spotted and unless you have a knack for pulling off long range shots that would make a Special Forces sniper look amateurish, you will need to bring your quarry closer in to give you a realistic chance of success.

Chasing it is rarely an option, few are stupid enough to hang around while a 4x4 trundles after them, the best bet is to ‘squeak them up’ simulating the cries of a wounded rabbit or similar to attract the fox. There are countless ways of doing so from simple devices you blow through to electronic callers pre-programmed with various sounds to the tried and tested technique of blowing on the back of your hand. All can be effective though local circumstances can play a part in dictating which works best for you on a particular fox.

Wind direction is also a factor that must be considered as a fox will often prefer to approach downwind of its prey, so if you can lure them into risking an upwind approach then they won’t be able to scent you, your aroma of spaghetti bolognaise and garlic bread will thus be unlikely to send him loping off into the distance.  Hopefully your experienced foxing shot will have positioned the vehicle on the top of any elevated ground, allowing you a safe shot into a good backstop, if not or when shooting on the flat be very aware of what lies behind your target, people tend to get a little miffed about centrefire rounds crashing through their bedroom window at two in the morning!

At last we are ready to take the shot, the fox is just over 100-yards out and is slowly but surely working its way closer, do you fire now or wait for it to get closer? Just bear in mind that the closer it gets the higher the risk of detection so your experienced foxer whispers; ‘go for the shot’ this is the cue for everyone to be on full alert, because in the event of a miss or a wounding shot its vital to know which way the animal turns and runs. It’s very easy to lose sight of the quarry at the moment the trigger is pulled, but a fox that’s been missed may well run some distance then pause for a quick look back, this can be a vital second chance if you can keep him in your sights. Hopefully you will see the animal fall from a clean shot but it’s important to be ready for a quick follow up shot in case it’s wounded; vermin it may be, but the fox is an intelligent animal that deserves to be treated with respect.

So you have been out on your first lamping trip, hopefully you have enjoyed it and learnt a great deal, you are beginning a long journey that can lead to many nights of enjoyable shooting though don’t think you will ever know it all. People who have been shooting foxes for forty years or more find that Charlie, Reynard or just plain old Mr Fox can still spring a few surprises, he hasn’t earned that reputation for being cunning by being too predictable!

Next month we go out with an experienced foxing team to see how it’s done….