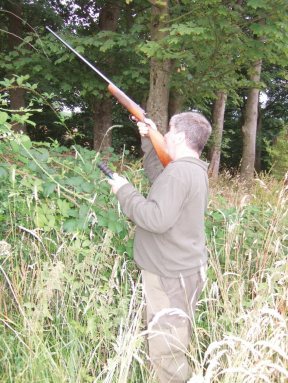 If ever you’re asked to help with a problem pest don’t go in guns blazing or throwing traps down willy nilly, as it might not get the results; do your research first! I, like most pest controllers, get the call after someone else has had a go. They may of started off well but some animals and birds are quick learners and aren’t stupid; otherwise they would of been well under control a long time ago. For example, I have done a lot of feral pigeon control using live catch traps and one thing you don’t do is to empty the traps during day light hours or leave any feathers lying around as it could look like a hawk kill. Obviously if they associate you with the trap then that’s you finished!

Squirrels for instance are very intelligent, good at problem solving and quick to take advantage of a free hand out whether that’s a bird table or the public throwing peanuts. You can solve the former easily; I smear Vaseline on the pole! Surprisingly after only two no more than three attempts to climb it and sliding back down they lose all interest and don’t even look up. But the public no matter how many times you tell them not to feed the wildlife, or how many signs you put up they still feed the character of the woods (the grey squirrel).

But you can turn this to your advantage if they are being fed then they will congregate in that one area that could make your job easier. However and due to public access and opinion, the use of poison hoppers is out, as is shooting, the only alternative being catch traps. So by putting the traps out in the surrounding area and baiting them up it’s easy to have an impact on their numbers in no time at all. Quickly replacing a trap with a new ready to go you can dispatch the animal away from public view, if seen I say that due to over population they are being taken to pastures new (works for me).

When I say do your research I mean just that; to most people squirrels eat nuts period! This is not true as nuts are not available all year round though some will be buried during times of plenty to see them through the winter; if they can remember where they are. Apart from nuts and raiding the bird tables a large part of their diet consists of sugar-packed buds and tree sap; unfortunately this is when most of the damage is done. Meaning they’re not the forestry’s best friend! If you look at all the four seasons I would say it’s late winter when the trees are stripped of their leaves and there’s less foliage on the ground making it easier to get a clear shot. It’s also the time of year when the squirrel spends most of their time on the ground repeatedly going over the same area looking for any morsel of food that may have been missed.

As there winter store of buried nuts is near to exhausted just before new buds start to show is the time to take full advantage with food being the first thing on the squirrel’s mind. I am not saying there’s no food for them but less at this time; though I have never come across an under nourished squirrel!

My method of control is to first stalk the woods with my Air Arms S 410 changing to a .410 shot gun as the squirrels get wiser and jumpy, taking them as they run along the branches before mopping up the remainder with live catch traps. But no matter what time of the year it is there are some things you can do to help improve your bag. Pressing peanut butter into the rough bark of a tree will have them constantly returning to lick it. Rough bark to make the squirrel work harder to get the bait out of all the nooks and crannies. Equally fat balls in chicken wire dangling from a string or bungee cord will also keep them occupied longer allowing you to get a shot. As with any forms of shooting don’t over shoot a given area - resting it will give you good sport and keep the population down, over shoot and the first thing you will notice will be less sightings and smaller bags giving you a false impression that you are winning the battle.

If you want to get a true picture then get out early pick your spot and wait, squirrels are not particular early risers but you must get there before they are out - if they see you, you won’t see them! To some people squirrels are sport but to most they are a nuisance pest; woodlands suffer due to the damage caused such as stripping bark to get at the high energy sugar-rich sap which results in killing the branch and over time possibly the tree too. Eating new buds and shoots also does great damage; any gardener knows when you prune a bush or tree it will throw out more new shoots and if not done properly can ruin what they’re trying to achieve.

I look after woods that until I started three years ago had very few song birds, not just because the squirrels were eating their eggs but to get to them they had to enlarge the entrance to their nest then would take up residence themselves, so depriving the birds of nest sites! Garden centres and fruit growers can be hit hard, farmers can have problems when the grain is raided. It’s not just what is eaten but what is carried away and stashed for later, don’t forget squirrels are natural hoarders.

Home owners suffer the damage caused once squirrels have chewed a hole in the soffit boards to gain entry. Just like rats they gnaw through wires and roof trusses; one four bed roomed house I cleared only because no one could sleep due to the squirrels running round the soffit boards using it as a race track. But that was nothing compared with the thousands of pounds spent strengthening the roof. Another home owner came back from holiday to find their home so badly water damaged after the plastic pipe feeding the header tank in the loft had been gnawed they spent weeks in rented accommodation. Anyone and everyone can be affected by the greys so whatever your chosen method of control is, keep it up!