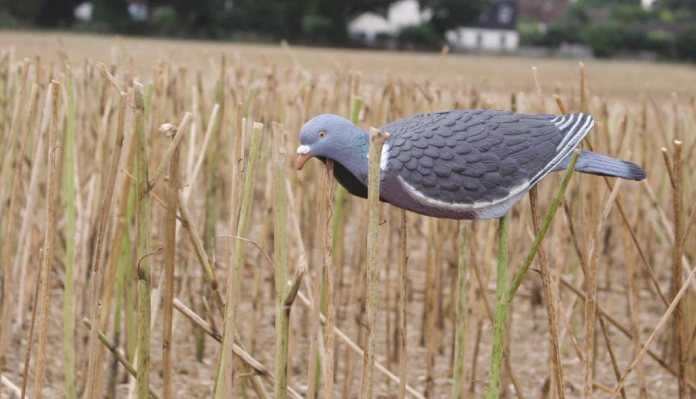 When decoying with the air rifle, perfection is key, as there’s less room for error than when using a shotgun. I met Gwyn who makes the Enforcer decoys at the BSS and we talked at length, discussing the best way of testing them. We agreed that decoying pigeons with an air rifle would be the perfect way to really see what they were made of. I have used many different decoys with a shotgun and had some great success, but less with an airgun. Whether this was because they weren’t set out effectively, or perhaps, did not look realistic enough to do the job and have had more success using dead birds instead.

I was apprehensive to test out the Enforcers on a field of recently cup rape. I had to work throughout the week, so the prime day, post-harvest for decoying was lost. The day came and I set out to the field and spotted plenty of birds feeding and flying over standing crop. Trying to decoy them there with the pellet rifle would be silly, I’d have no chance, so the original plan was still on. Upon arrival, I noticed a few birds on the ground feeding, I clapped my hands and about 100 flew up, and my spluttering expectations went skyward too, as I could have a really good day. This is a universally familiar thrill for every hunter who sees those key signs, which indicate they may achieve their goals.

I settled upon using a pop-up hide; ideal, as it’s quick to set up, waterproof, because the weather looked unsettled and could be erected almost anywhere. I decided to set it next to a small patch of wood and bushes that stood about 50 yards inside the field. It took a few minutes to set up due to the wind, but once up and pegged down, it was bombproof. I then set out the decoys in a pretty random fashion. I set them into the wind, as this mimics the pigeon’s landing preference. There seems little point going to the expense and trouble, not to take time to set the deeks in a way which makes them look as natural as possible.

They were also in a rough horseshoe shape. I read that this is a good place to start when setting out a pattern, if it didn’t work out, I could always change something. My furthest deek was out at 35 yards and the closest 10. This was because if a bird landed in the pattern, I would have a good idea on the distance without creating more movement than necessary, checking it with the range finder. This would also take time and the more time the bird is on the deck, the more chance there is of it realising it’s been conned and taking off. The plastic pigeons looked absolutely realistic, they just popped out of the rape stubble. I was eager to get shooting; so, as soon as they were set, I headed back to the hide and set up the gun. I chose my HW100, it’s nice and short, so perfect for use in a compact hide. I’ve said it before and I’ll say it again, it’s just deadly accurate out to 45 yards and beyond, which was what I needed.

In pretty short time, the first pigeon dropped in. It had its back to me, so I had to go for a spine shot but It was walking around a little bit, so patience was key here. The rape stubble was still fairly tall so the chance of clipping was high. To reduce that, I made myself as solid as I could, resting my gun on my camera mono pod that had a sock wrapped over the top to protect the wooden stock. Not ideal but better than nothing. I lined up through the Hawk Airmax and waited for my opportunity. It soon came.

As the penny was dropping in the pigeon’s head that he was the only thing moving amongst his plastic counterparts, it froze. I squeeze the trigger and sent the pellet towards the bird’s vital organs. The 8.4-grain JSB exact struck it in the back, there was a puff of feathers and the bird flopped forward in a heap. The lead travelled straight through the back and into the heart which caused not even a flap, like turning off a light. I left it there, knowing that it would be a great decoy and increase the chances of other birds coming. Almost as soon as I had thought this, another dropped down and looked suspiciously at its fallen comrade, unsure of the situation it had found itself in. It was showing off its white neck ring, making it clear he wasn’t happy. I took the opportunity of its uncertainty and fired a pellet into the side of its head. This sent it into a wild flap around the ground. Two in the bag.

I was finding small groups of pigeons landing the other side of the field, away from my decoys and they were drawing pigeons over that should have been coming to me. To combat this, I would break cover now and then and shout at the top of my lungs to get the birds back moving. How conventional this is I don’t know but it did the job for me.

So far, the decoys were working brilliantly, as I had never had this success, especially so soon into a session. The wind was getting up even more, which I knew would be a disadvantage using the air rifle. I also knew that it would keep the pigeons moving, so would perhaps present me with more opportunities, I just hoped that they would land close enough for me to strike. Plenty of birds were flying over, with a shotgun I could’ve had a red letter day. However, the village was nearby, hence that was not an option; the air rifle was the only tool for the job!

Another bird landed to my left, although this time not in the pattern. It had flown into the tree just above my hide. It didn’t know I was there, and I wanted to keep it that way. I carefully unzipped the left-hand window of the hide and gently manoeuvred myself to get into a position that I could take a shot. Even the short HW100 carbine was a little long for this job, but I had to make do. I poked the silencer out of the window flap and could just make out the pigeon’s head behind the ash leaves. The wind briefly dropped, so did the movement of the surrounding vegetation, that’s when I took yet another shot and dropped another pigeon. This one didn’t land so neatly and looked very dead as it lay on the floor, this would put other birds off, so I broke cover and set it up properly. I also retrieved the second one and made him look a little more life-like as well.

Once back in the hide the waiting game continued. It was perhaps 20 minutes later before the next pigeon appeared. I spotted it just as it came to touch down, it drew its wings back and gave three big flaps, throwing the anchors on just as its feet touched the ground. It instantly began to feed, and I was itching to get another in the bag. It landed in the taller rape stubbles, so threading a shot through would be a challenge. Again, I just had to wait for the right opportunity before taking a shot, rushing would be futile. I knew my gun was bang on and I also that there was little margin for error. The wind was against me and so was the opportunity for a clear shot but as long as it was still there, there was a possibility. The bird slowed and I threaded a pellet in between some foot tall stubble for a heart shot. It dropped forward, same as the first and I was happy.

Pigeons were coming into the pattern, not necessarily fully committing to landing, but hovering above the decoys. Good, but not good enough for me with the airgun. I shot a couple more, much the same as the last and I missed a couple to down to clipping stubble and being undone by the wind. The Enforcers proved themselves to be very worthy decoys. They brought the birds down, luring them in from fields away. What more could I ask for?

The quality of the painting is well above the norm, which seems to make a difference. When walking to and from the car, which can at times be quite a distance, the fact that they fit snuggly together in the designed zip and Velcro carry bag is an added bonus. I was very happy with the way they performed for me and it is the best success I have had with an ‘air rifle/plastic decoy combo’. I headed out the following day looking for the same success and found it. This time, with the video camera on board and a different rifle. More of that on The Airgun Show YouTube Channel later. For more information; info@ enforcerdecoys.co.uk