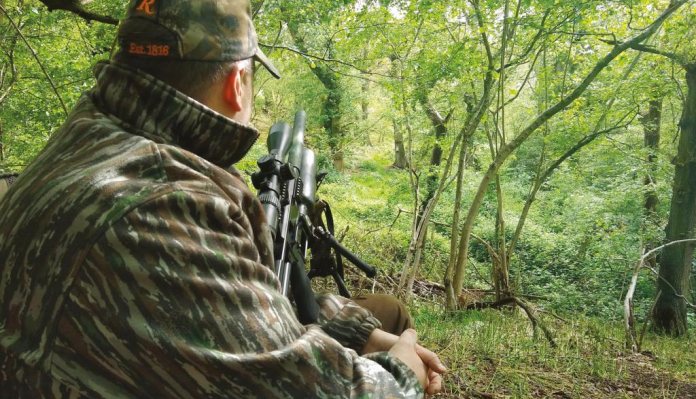 A few months back, I wrote about a cracking squirrel-shooting foray involving a couple of FAC-rated .22 air rifles (my Daystate Mk4is and my buddy James’ new FX Impact X). With further unfair advantage provided by two Pulsar thermal imagers: the competent Helion XQ19F and the superb Accolade XP50, the latter kindly loaded to me by distributor Thomas Jacks.

This inspired us to do more squirrel bashing, thinning them out over the autumn and winter with airguns, shotguns, and even centrefires. Hits with the .204 Ruger produce spectacular results, especially through my Pulsar Trail XP50! To make sure we mopped up as many of the survivors as possible and, inspired by YouTube, I decided to set up some feeders to draw them in to an airgun ambush.

I’m no handyman, so I looked online for a ready-made solution, but it seemed that if I wanted something suitable for shooting squirrels off I would have to build it myself. Then, at the British Shooting Show, I came across some squirrel feeders produced by Ian Hampton in the course of his ongoing work with the Cornwall Red Squirrel Project, which struck me as exceptionally welldesigned and built. They even had a little squirrel-shaped spinner target mounted in the side, so you could check zero before shooting in earnest!

The feeders are super-robust, being constructed from ½” thick tantalised WISA plywood and encased in a gnaw-proof steel mesh. The lid is secured with a brilliantly simple latch comprising a protruding screw tip that engages with a matching hole in a metal tab when you close it. To unlatch, you simply poke a nail (supplied!) through a small hole and push the tab off the screw.

With a choice of 4.5 or 9kg sizes, the feeders are also large enough to permit more time between visits without running dry. Meanwhile, the feed is kept in good condition and flowing smoothly by angled hopper-type panels that deprive it of any corners to get mouldy in and channel it towards the port at the bottom. Spacer bars at the back also ensured the feeders wouldn’t absorb moisture through contact with the tree they were mounted to.

However, it is at the front of the feeder that the real magic happens. Here, an aluminium face-plate protects the plywood from pellets and prevents squirrels from gnawing away at the feed port. Ian uses 3mm plate as standard, but I chose the 6mm version for our FAC airguns.

In front of the port, a feed trough is created by a perforated aluminium screen, flanked by a narrow ledge. The screen prevents spillage, of course; but the genius of this layout is that squirrels can only access the tray from the ledge, and that the ledge is wide enough for one to sit on to enjoy the spoils of its raid, but narrow enough that it has to sit sideways, presenting a perfect shot to the hunter.

Seriously impressed by Ian’s feeders and liking the idea that my efforts to help songbirds and reduce tree damage in the Midlands might also help support Ian’s efforts as a squirrel ranger in the South West, I decided to get a couple as soon as they were commercially available. A few weeks’ delay while Ian got production underway and set up his online shop, Squirrel Management UK (SMUK), gave us time to think about where to site the feeders.

We decided that the location had to meet three main criteria: the shooting position should be sheltered, comfortable and easy to access without disturbing the wood. The range should be short enough to guarantee precise shot placement even in blustery weather. Finally, there should be a safe arc of fire either side of the feeder, to allow us to despatch any wounded animals that fell to the ground.

James really put his mind to it and soon found the perfect location. The firing point he had chosen was just 15m from an easy point of entry to the wood and overlooked two mature oak trees, each 40m away and slightly downhill, but with rising ground behind them. They were some 70m apart, and the whole location was sheltered from the wind.

Once ordered, the feeders arrived quickly and proved easy to mount. We screwed hooks into the bark and wired them to the screw-heads in the sides of the feeders, then filled them with peanuts, set up trail cameras to monitor them and left them for the squirrels to find.

Despite intending to keep away for a couple of weeks, we were back the very next day under the pretext of checking the cameras and our rifles’ zero (a.k.a. plinking at the spinners). As soon as we entered the wood, we spotted movement by the left-hand feeder. In stealth mode now, we moved into our ambush position, readied our rifles, and fixed our eyes on the feeder.

Suddenly, the squirrel reappeared, heading straight for the feeder. A moment later it had scrambled onto the ledge and grabbed a peanut from the tray, and now it was perched on the ledge, side-on. Perfectly presented. James and I shoot from different shoulders, so when hunting together, I take the 12-3 O’clock arc and he takes 12-9, so it would fall to him to christen the feeder. No pressure, James.

No problem. The Impact coughed, the pellet flew true and the squirrel dropped lifeless to the ground; but that wasn’t the end of the action, almost at once, another came in and met the same fate. Then, I had one off the right-hand feeder, and by lunchtime we had accounted for no fewer than eight between us. Not bad for a plinking session!

When I checked the cameras, I saw that the feeders had also been discovered by Great Tits, Nuthatches, and Greater-Spotted Woodpeckers, as well as by Magpies and Jackdaws. I was glad both of the extra help we were giving the woodland birds, and of the extra dimension this was obviously going to give to our corvid control efforts. Also satisfying was confirming that we had attached the feeders far enough from the ground to keep them out of the reach of Badgers and Muntjac deer, both of which showed a keen interest.

Epilogue: with the coming of summer, we have switched from peanuts to cheaper maize. This still attracts the squirrels and corvids, but appeals less to the smaller birds, so we plan to revert to peanuts for the winter months. Of course, we may not have any squirrels left by then, as James has become addicted to shooting them at our SMUK feeders, single-handedly accounting for almost 50 with his FX Impact in just a couple of months!

Back in February we would never have believed there were another 50 squirrels to be had out of that wood. But the SMUK feeders not only showed us just how many there were, but also enabled us to shoot them humanely and efficiently, whilst helping native wildlife both on our own patch and further afield.