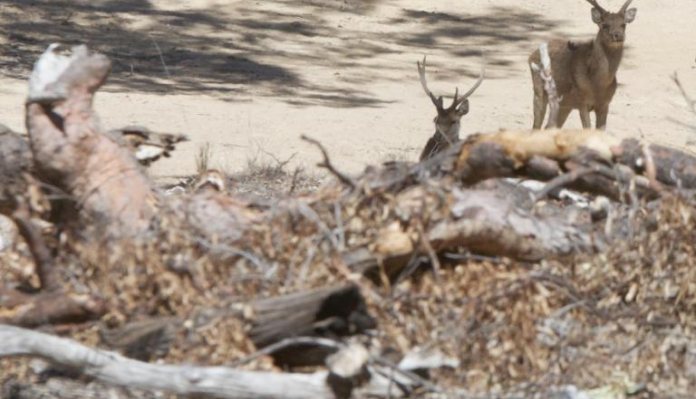 It’s August and the Westerlies are blowing. Winter isn’t done with us just yet and, after a run of early morning below zero temperatures, the frost has browned off the remaining grass. The air is cool and dry, and while the property has seen some rain since we last visited, the landscape reflects a critical storage of water. With Spring only a few weeks away, the heat is coming, so you try to dress for a temperature range of zero to about 25º Celsius.

Our hosts, Jim and Debbie are as welcoming as ever and, after a quick visit to check the rifles and give Jay a little more practice, we head out for a look around in the last light of the day. Amongst the high, hard, rocky country we spot goats and, with Jay keen for their meat, Jim sets him up for the shot.

It seems the practice has paid off and firing from about 80 metres away, Jay lands a head shot, dropping a small Billie on the spot. Jim, returning to the old Hilux, soon guides it through the rocks and we load by our first kill for transport back to the cold room. About an hour later, we are back at the homestead for dinner, a few rums, a good chat, any number of tall tales and bed.

With a strong wind blowing, dawn is a dusty affair, and, after a heart starter coffee, we head towards a blind that overlooks a well-worn pig and goat path. The blind is a simple, though comfortable, set up; however, Jay is totally unprepared and shivers through the first morning. At around 7:30am, the pigs make their way through, heading towards one of the remaining wet dams. It’s an impressive mob of bacon, led by one sizeable sow; however, the remaining animals, while plentiful, are all a little small, so I get the camera out, to the sounds of chattering teeth from Jay.

Watching on, the pigs don’t get much better, however I’m not too worried, so we again turn our attention to goats. Even in such dry country, the animals are sticking to their natural range with the porkers moving through the now dry creek line, while the goats stick to the high rocky ground.

After about 20 minutes of bouncing along in the Hilux, we come to a stop just in front a dry creek crossing and beginnings of a track heading up hill. Amazingly, as soon as we start moving up and into the rocky country, we see animals, however they are on the wrong side of the wire, so we double back with the intention of getting above them.

Checking a small rise, we spot them just below. They haven’t moved far from the fence and have in fact been joined by others, so there is plenty to choose from. Jay, under the guidance of Jim, votes for food over a trophy and lands a neck shot that drops the smaller Billie on the spot. The other animals break away and we spot another Billie that is very much a shooter. As luck would have it, while he got away this time, we would see him again soon.

Jim was keen to start some meat processing, so dropped Jay and me off to another part of the property. We were now amongst the trees, overlooking a well concealed dam that still held water. While we were only about 15 minutes after from where Jay took his last goat, we were again in very different country.

With soft, sandy soil, we were under heavy cover, keeping an eye out for whatever might come in for a drink and, being we were now within a single, 1100-acre block that bordered a massive expanse of State Forest, that could be anything. It was slow going; however, at least it was warmer now and we were out of the wind.

After about an hour, four Javan Rusa stags made their way over for a drink. The group moved in and around the dam and, as our view was partially obscured by some recently cleared timber, they would, at times disappear from our restricted position. However, we just waited them out and, as luck would have it, they eventually decided to hold up right in front of our position.

Keeping an eye on the time, we knew that Jim would be arriving soon, and in doing so would more than likely scare them off, so was a case of now or never! The first thing was to pick an animal, with Jay favouring one; with that sorted, it was time to get the job done. Trying my hand at guide, I firstly got Jay set up on the shooting sticks and together picked a place to hit the stag. With everything ready to go, I then grabbed my rifle, just in case it didn’t work out as planned.

I needn’t have bothered, with Jay dropping him easily with again, a single neck shot. There was no doubt about it, we were going home with a lot of game meat. Timing things perfectly, Jim rolled up about 10 minutes later, so we loaded the stag and headed back for a late lunch.

So far, the Pigs had been decidedly scarce; so, after lunch, we spent the few remaining hours of daylight in search of tusked bacon. As with our previous searches, it was a case of bad luck with the only pig spotted being the large black and white sow seemed to be everywhere.

Towards the end of the day, we found ourselves amongst the rocks and of course spotted more goats. Jay wasn’t finished just yet; so, this time, I took him out while Jim watched from the Hilux. After a low stalk across some very open ground, we made our way to a poor excuse for a tree. I got Jay sorted and told him to wait and see what presented itself. The animals were slowly funnelling down a very rocky gully. It made for a perfect location if you wanted to shoot a lot of them. However, a clean shot wasn’t so easy, and the mob often bunched up and, even more frustratingly, would suddenly turn uphill, before spinning around again to continue down.

Looking for a likely target, we spotted the Billie from the morning’s hunt and waiting for a clear shot. For a while, it looked like he might move out of range; however, at the last moment, he, like the others, spun around and came back up. Presenting a slow-moving shot, Jay fired, and you guessed it, landed a neck shot, with the animal coming to rest amongst the rocky ground.

With the sun dropping and the broadcast of the Bledisloe Cup between the All Blacks and Wallabies about to start, it was a very quick load out. Jay, a Kiwi via Fiji was letting us know the All blacks would be keeping the Cup and, if his luck with the rifle was anything to go by, it was going to be a long night for us Aussies.

Over coffee the next morning, we planned our Sunday. As it was our last day, we would only hunt the morning and, with Jim having a lot of meat preparation to compete, Jay decided to give him a hand.
Wanting one last chance at a boar, Jim and Jay suggested I head out on my own and see what I could make of it.

Over the next few hours I covered a lot of ground and saw plenty of animals, including some drought affected Red Deer. My plan was to walk a long loop and end up walking into the wind, following a dry creek bed. I’d had luck with a similar approach in the past, as even if the creek is dry, pigs will hold up under the ample cover.

A couple of hours later, I was in position and dropped down in to the deep sided, though very dry creek system. Hunting pigs in what is essentially a high sided tunnel is challenging, as there is little room to move and you tend to see them at very close range.

Sometimes, they hear you and run, sometimes that decides to make you run. Momentarily coming out of the creek system to get my bearings, I spotted pigs. Unfortunately, it was the sow and her mob. Now that sow was a BIG one and I was sorely tempted to aim up, however my better nature prevailed, and I waited for them to move off before continuing to search for a boar.

As it would turn out, I didn’t find that Boar and, thinking things over a little, maybe that sow, in protecting her brood had pushed them off for a while. Anyway, it was getting on, so I headed back towards the homestead. Walking up to one of the work sheds, the processing was nearing completion and with eskies full we had at least two home freezers worth of meat. A little while later, we packed up, said our goodbyes, wished them both plenty of rain, and hit the road until next time.