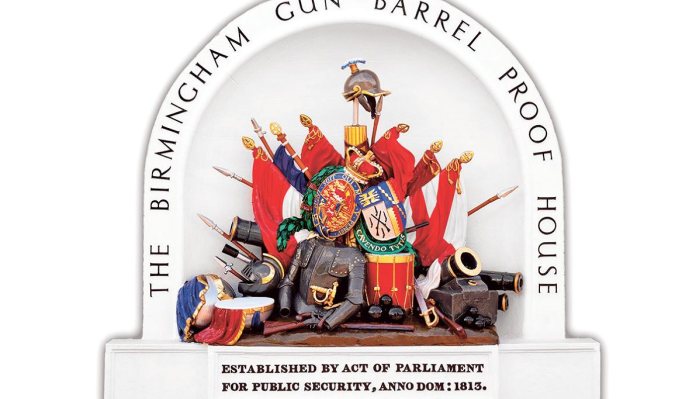 Ever wondered why your firearm or shotgun needs to be proofed? Well, I was lucky enough to be able to visit Birmingham Proof House and take a look at what goes on there and also have a look around the museum.

So, what is gun barrel proofing and why is it done? Proof is the compulsory and statutory testing of every new shotgun or other small arm before sale, to ensure, so far as it is practicable, it’s safety in the hands of the user. Re-proof is the similar testing of a small arm, which has previously been proved. Both necessarily involve the firing through the barrel of a considerably heavier load than is customary in the shooting field, thereby setting up pressure and stress on barrel and action much in excess of the pressure generated by standard load cartridges. Such pressure should, and is intended to, disclose weakness in guns, whether new or used, for it is preferable that weakness be found at a Proof House rather than in the field, where personal injury may result.

So, my recent visit to Birmingham Proof House was nothing short of fascinating! Blimey, where do I begin? Having previously arranged this visit and gaining special permission to go ‘behind the scenes’ of the Proof House and Proof Laboratory, I arrived promptly at 09.00 at the main gate, which in fact looks ‘prisonlike’! I was buzzed in through the two sets of gates by Dave Evans and Steve Green, who look after the museum.

I was then taken over to the British Proof Lab. This is where all of the proofing ammunition is handloaded and stored ready for when firearms come in-to be proofed. The main purpose of the Lab is to test manufacturer’s and service ammunition. Also, if you are a home loader and would like data on the ‘bang’ that you have created, they will give you all the stats on pressures, velocity, power etc. The way they do this with all of the ammo that they test is very in-depth and a real science, but lucky for you readers, it’s me who is writing this, so I’ll keep it simple!

Right, you can imagine all of the different calibres that are tested here, pretty much everything that you can think of, from shotgun ammo to .50 cal and bigger! Now, instead of having a ‘gun’ for each calibre, they have a heavy-duty barrel clamped and locked into what is called a universal breach. This is locked down onto a solid metal bench in a small test firing room, with a hole in the wall for the muzzle of the barrel to go into. The other side of that wall is obviously the range that is about 25-metres long with a sand butt at the end, but a snail bullet trap is now used instead.

I was then shown where actual firearms are tested for proof. As you can imagine, it’s a bit of a concrete bunker affair, but basically there are several small firing rooms, which have a clamp that the firearm is secured in that is on rollers to absorb the recoil. The triggers are pulled via a lanyard with a hook on the end and the end that is pulled goes through a small hole in the wall where there is a small window (bullet proof glass fitted as standard!) from where the tester can view the firearm.

Six rounds are fired through any firearm that is being proofed and the ammo that is used is hand loaded in the proof lab. A proof round is 25% more powerful than standard ammunition, so to make sure that the firearm/ shotgun in question will hold together! Once the six rounds have been put through and all is well, that particular gun can then be stamped on the barrel (well, engraved with a CNC machine!) and all relevant paperwork filled in. It is then a ‘Proofed’ gun that can then go on its way to be sold or exported. I found it very interesting that even police and military weapons have to be proofed in exactly the same way, even if it is a belt-fed machine gun!

My next stop was the museum, that by the way is open to the public upon request and I highly recommend a visit! The collection of weaponry held by the Birmingham Proof House is really quite vast. Lots of historic firearms, shotguns, muskets and even signal guns, cattle killing guns, riot guns and harpoons! Yes! HARPOONS! They even have a Greener harpoon like the one Quint used in the Jaws movie to attach the yellow barrels to that big fishy!

And then we went into the room that I was looking forward to seeing the most, the proof failures and catastrophes that have happened to shooters and re-loaders alike. Talk about sights that make your eyes water! Now, if you are a home loader, the things that you see in this part of the museum will really make you stop and think! Firstly I was shown a .50 cal machine gun barrel from the armed forces that had split/ cracked from muzzle to breech.

Then there were numerous shotguns that had been written off by their owners from doing things like mixing up their .20-gauge shells with .12-gauge and then loading a .20 into their .12-bore, which would drop down to the cone. And then, not noticing, would put a .12-gauge shell in behind it and take a shot, resulting in a nice big hole in the side of the barrel! One of the finest ‘masterpieces’, as far as shotguns go, was an over-under that had the bottom barrel blown due to the shooter mixing black powder with nitro propellant! This resulted in the bottom barrel blowing out from the breech like a banana skin and pealing the top barrel up to almost 90°! It made me wonder if the shooter actually lived to tell the tail!

There were also lots of ‘out in the field’ mishaps, like snow or mud in the muzzle, resulting in cartoon-like failures on guns! For me though, the Darwin Award goes to whoever managed to stack a .44 magnum long barrel revolver’s barrel up with no less than 11 bullets! Yes, ELEVEN! I was looking at this masterpiece for five-minutes with my mouth wide open I can tell you! It was interesting that most of the items in this room were from ‘homeloaders’. Kinda frightening!

The other parts of the museum oozed history, as this place has been going since 1813! Lots of pictures on the wall from years gone by, plus a beautiful display of bayonets, hammers, swords and loading rods. There is a great collection of Webley airguns from the earliest one to the present day, including a couple of prototypes that never made it into production. This vast collection, which represents over 50-years of accumulation, was actually donated to the Proof House by a Mr John McCrossen – much respect to you, sir.

There are display cabinets full of flintlock pistols to present day semi-autos, plus racks of Enfield rifles and shotguns. I discovered some types of gun that if I’m honest, I did not even know existed! Like, for example, a Line Thrower that was used in the maritime industry for basically firing a line or rope from ship to ship or harbour. The most unusual one for me though was the ‘Furnace Gun’, a very strange looking thing that had a .12-gauge Martini action with an extendable 6-8-foot long barrel that was in an ‘L’ shape at the muzzle, yes, a gun for shooting around corners! No, not really, it was actually used for repairing brick work in hot furnaces by putting clay in the blunderbuss like muzzle, putting the barrel into the furnace and firing it at the part of the oven that needed it, the clay would then dry instantly on impact. This was a very economical way of doing repairs rather than shutting down a furnace that would take days to cool down.

Then, to the other end of the spectrum, the smallest pistol ever built, wait for it, a 2mm calibre! Ideal for hunting insects I guess! These small guns were actually made by apprentice gun makers to show off their skills once they had been trained. I suppose if you can make something tiny, making it big would be fairly easy!

On to the ammunition room, where there were lots of glass cases full of different types of bang from shotgun cartridges all the way up to 20mm armour piecing rounds and rubber bullets.

They finally kicked me out at around 14.30, after a truly fascinating tour around, and I would really like to thank the guys at Birmingham Proof House for their hospitality. I could have spent another full day there really studying everything and I’m certain I will visit again and I suggest you do too, as they want more people to visit Birmingham’s hidden gem! Safe shooting (and reloading!).