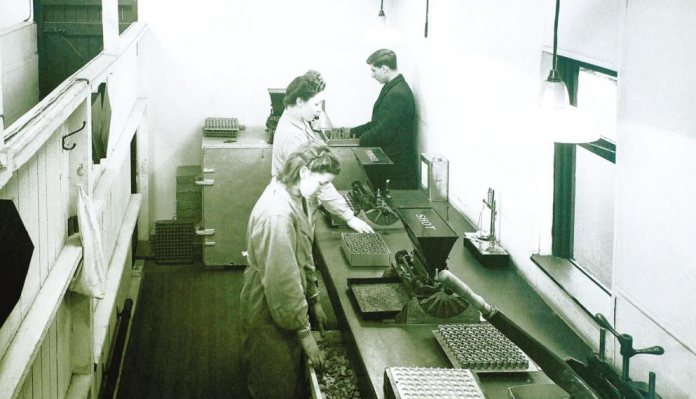 Hull Cartridge Company is quite rightly proud of their roots and location, but it’s their own 70th Anniversary that really warrants our interest. Top class shotgun cartridge manufacture is their stock in trade, but my dealings have always been related to their airgun side, as they are of course the UK’s official importer for the famous Weihrauch brand. And with this exclusive trading tie-up now in its 40th year, they really do have plenty to shout about!

So when I received an invitation to attend their Press Day, to celebrate the aforementioned milestones, witness the launch of a new logo, and share in their vision of the future, I was intrigued to say the least. In fact, it was more than intrigue, as my historical association with Weihrauch, from the early days of Field Target Shooting, means I have something of an emotional tie with the company.

The Army and Navy Club, in Pall Mall, central London, was a suitably prestigious venue too; not lost on us hacks, as we quaffed champagne, among the oiled canvases of Her Majesty, and the odd bust of good old Monty. Consider Hull Cartridge’s credential’s, and they stack up rather nicely too.

Humble beginnings of course and Sydney Bontoft is the key figure, who in 1922, incorporated his first company supplying carbide, mainly to industry, but also to the farming community. Apparently, as he toured various farms, he added cartridges to his operations, and this developed into regular trade. He started loading his own shells, and the rest, as they say is history!

Hull Cartridge Company was formed in 1947, and the business has developed and grown, to the point where they are now somewhat pre-eminent in their field; highly respected and highly innovative. 1969 saw the introduction of waterproof plastic cases for example, and 1992 saw the introduction of High Pheasant, the original high bird cartridge. Winning various ‘Best Cartridge’ awards along the way in 1994, 2003, 2005, 2007, 2008, 2009, 2012, and 2015 shows an astonishing commitment to ongoing development. Their slick marketing includes the line ‘The Finest Ammunition’, and with the company’s extensive cartridge lines now carrying the ‘By appointment to HM The Queen, manufacturers of shotgun cartridges’, this ultimate endorsement, awarded since 1992, gives indisputable kudos to the brand. I was keen to learn the implications of such a link, and apparently it has to be earned and maintained with quality checks periodically.

Hearing the company story, as various members of the operation laid out the facts and figures, it just struck me as a thoroughly heartening sight, to see each member of a genuine family business, all clearly proud of the direction in which the company is heading. Current Directors, David and Susan Bontoft, led the charge, and with a distinguished contribution from Hugh Clarke, along with the unveiling of that slick new logo, the occasion was well and truly marked.

I’ve always found Hull Cartridge a very professional company to deal with, but hadn’t quite appreciated the full scale of their operation. After a virtual tour of the factory, and some of the processes, I now have a far better grasp of what lies behind the logo. Producing cartridges for other brands as well as their own lines, has paid dividends over the years, and associations with top end companies such as Holland & Holland all helps highlight Hull’s standing in the market place. One of the strap lines used by the company is ‘The Confidence to Win’, and that was perfectly highlighted by two of their ‘Ambassadors’ -Cheryl Hall, (Ladies European FITASC Champion, as well as many other titles), and Ed Solomons, (World FITASC Champion 2014). Both were in attendance, and both have tasted success on the back of Hull Cartridge hardware!

Hull’s benefit to the shotgun community is all very impressive, but when I heard that Hans Weihrauch himself was to be the guest of honour for this Pall Mall bash, I knew where my priorities for the day lay. I needn’t have worried either, as the HC team had been very thoughtful indeed, and as I checked the seating plan for lunch, it was clear that I was going to have his ear for the duration! How fantastic, I thought, and as it panned out, it was, as we chatted on all things airgun, as well as a few matters of the day.

Hugh Clarke’s idea to source airguns for the Hull Cartridge portfolio, way back in 1977, famously led to the first HW35s being imported to the UK. And with fairly weak rivals at the time, it soon became wellestablished as a quality German power house; cementing Weihrauch’s reputation in the UK as it did so. A stream of models, such as the HW77, HW97 and, HW95 were to follow, and this iconic brand has never looked back- with the UK their largest market by far.

Back at our lunch, and I of course tried not to bore Hans at length, as I related my Airmasters days from the ‘80’s, competing in top FT competitions, using heavily modified Weihrauch HW77’s, but he dutifully listened. What a nice chap.

Snippets off the record, and intriguing insights from the German perspective later, and the most enjoyable lunch sadly came to an end. So what did I glean? Well, I’m a man of discretion, and all I can divulge is what is fairly common knowledge; namely that Limited Edition airguns are indeed planned, to celebrate the 40 years of importing through Hull Cartridge, and these are set to be revealed at the Game Fair in the Summer. Yet whilst my musings with Hans Weihrauch over lunch covered several areas, his tactful circumvention of my enquiries, left me none the wiser. Official line; the exact models are still to be decided. Rotter!

Hans was indeed great company and a true gentleman; the Bontoft family and Hull Cartridge team were also the perfect hosts, and I left somewhat more knowledgeable than when I arrived. So, it just remains to wish Hull Cartridge Company the very best for the future, and thank them for their warm hospitality.