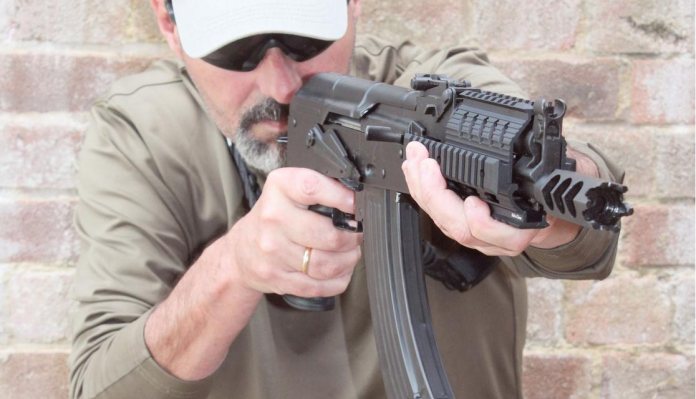 These days, when it comes to my own airsoft, I’m quite a dedicated opposing force (OPFOR) player; whilst I love this in a fully immersive Military Simulation setting, it’s also a role that is becoming increasingly popular in more relaxed scenarios. Many players spend a lot (an I mean a LOT!) of money getting their ‘NATO’ or modern Russian loadouts absolutely nailed, and full credit to them for that, while OPFOR players can be much more relaxed in this respect, so it’s a great way for newer players to move on from just general skirmishing.

Equipment in relation to OPFOR is often very straightforward; I tend to play as a ‘Militia Fighter’ and that means it can be as simple as throwing on some civilian clothing mixed with army surplus gear, a canvas ChiCom chest rig and a concealed carry pistol holster. To give this loadout a distinctly different feel to modern military armed with M4s and SCARs, my choice of primary is always some form of the venerable AK. For woodland scenarios that means my classic gas AKM or SVD, but when things get a little more ‘up close and personal’ in an urban setting, it’s my short AKS-74U that comes into play.

The ‘SU’ is a cracking little bit of kit, and I’ve reviewed both gas and electric versions in the past; my personal choice is an open bolt gas version, but this takes time and no little expense to get right, so many players will opt for an AEG version both for ease and cost-efficiency. Once upon a time, like all airsoft AK variants, you would have been limited to a select group of manufacturers, but these days if you decide to opt for playing an ‘SU’ wielding ‘freedom fighter’, then your options are almost unlimited!

To recap, no doubt inspired by the US carbines of the time, in 1973 the Soviets decided to look for a shorter weapon themselves, even shorter still than the folding stock AK74. The specifications set out requirements that the new weapon should weigh no more than 2.2kg, have an overall length of 75/45cm with the stock unfolded/ folded, and a muzzle velocity of at least 700m/s. The challenge was of course taken up by Kalashnikov with the PP1 design, Stechkin with the TKB-0116, Simonov with the AG-043, Konstantinov with theAEK-958, and Dragunov who called his model the ‘MA’; in fact, all the great Soviet firearms designers of the day wanted a piece of the action!

In 1977, the Glavnoye raketnoartilleriyskoye upravleniye MO RF, or GRAU, decided to adopt Kalashnikov’s model, which was pretty much just a shortened AKS-74, as it promised significant production cost savings by utilising existing equipment for the AK-74 line. A final round of large scale testing with Kalashnikov’s model was performed by airborne divisions, and the AKS-74U (‘U’, Ukorochenniy, or ‘shortened’) was officially adopted in 1979.

The carbine’s compact dimensions were achieved by using a short 206.5mm (8.1-inch) barrel and a reduction in the length of the operating mechanism; this in turn led to a rise in the cyclic rate to 700- rds./min. In order to effectively stabilize the round, the barrel’s twist rate was increased to adapt the AKS-74U for muzzle velocities of 720m/s (2362fps) and higher. A new gas block was installed at the muzzle end of the barrel with an extremely distinctive muzzle booster; this featured an internal expansion chamber inside the cylindrical section of the booster, while the conical end acted as a nozzle to increase pressure inside the gas chamber by supplying an increased amount of propellant gasses from the barrel.

The chrome-lined muzzle booster also burnt any remaining propellant, which would normally reduce muzzle blast. However, due to the extremely short barrel and conical end of the booster, the muzzle blast was still dragon-like! The forward sling loop was relocated to the left side of the carbine and the front sight was integrated into the gas block. The AKS-74U also had a different sighting system; with a U-shaped flip sight instead of the standard sliding notch rear sight. The rear sight is housed in a semishrouded protective enclosure that is riveted to the receiver’s spring-loaded top cover.

The AKS-74U bridged the gap between a submachine gun and an assault rifle. It was intended for use mainly with Special Forces, airborne infantry, rear-echelon support units and armoured vehicle crews. It is still used in these roles, but has been augmented by various submachine guns, and the AK-105.

As an airsoft replica, the AKS-74U is a personal OPFOR favourite; it’s simple, straightforward, lightweight and extremely compact, especially with the stock folded to the side. In close quarters, this compactness makes it extremely effective whilst you’re navigating gloomy corridors and compounds. Unlike the ‘NATO’ troops I and my fellow ‘militia mates’ will often get into character, firing from the hip and even with the stock collapsed, so it came as no surprise to me when I saw two REALLY short AK ‘pistols’ in the LCT range.

LCT Airsoft make some superb airsoft replicas, and their extensive range of ‘Soviet’ rifles, carbines and SMGs has to be seen to be believed. LCT AEGs are made from a mix of steel, wood and aluminium; they are extremely well finished with a hard wearing coating that is more resistant to wear and tear than normal airsoft AKs, with excellent and realistic colour matching. Internally, things are equally as good; there’s a tried and tested V3 gearbox, a ribbed aluminium cylinder, aluminium cylinder head with double O-ring, a plastic nozzle with O-ring, polycarbonate piston with steel teeth, an aluminium piston head, and a precision hop chamber. This sounds all very well, and in actual fact it is, as these components will give you great performance straight from the box.

What makes the ‘AK Baby’ so interesting for me though is that it’s the firearm used by Art Malik in the 1994 movie ‘True Lies’; ‘Salim Abu Aziz’ can often be seen using a custom shortened, stockless AK with two magazines taped together ‘guerrilla-style’ as his primary weapon. It appears to have had the barrel professionally shortened to compact status, and clearly uses the hooded SU front sight, as well as other parts from the Norinco Type 56 and the AKMS. Given then that this shortened AK would have used the 7.62×39mm M43 intermediate rifle cartridge it does beg the question of how it would have actually worked given the problems it would have encountered in cycling; with no muzzle booster, the gas pressure must have been a real issue. I’ve spoken to a number of ‘AK friends’ around the world about this and it’s seriously left us scratching our heads!

That aside though, the LCT is a corking replica of the ‘movie gun’; it’s of full steel construction with a 35mm CCW steel flash-hider, a shortened 110mm real wood handguard, and a polymer AK74 tactical pistol grip, which offers a rugged surface and finger groove design for maximum grip retention. There’s an AKM style adjustable rear sight, whilst the front sight is distinctly SU, and on the left side of the receiver is a mount for an optics rail. Metal front and rear sling points mean it can be used with single, two, or three point tactical slings; as there’s no stock at all on the ‘Baby’ it screams out to me for a singlepoint.

Now having created a super ‘movie’ replica, I would have thought that LCT would have called it quits, but the ‘TX Baby’ model proves to me that there must also be some pretty serious CQB players working for the company. Taking the original ‘Baby’ as a donor, LCT seriously up the ante by dropping the wood and the AKM style flash-hider and replacing them with an absolutely beautiful 155mm metal quad rail and a chunky spiked muzzle brake; all the other features remain the same, but these slight, far from subtle changes turn the ‘TX Baby’ into a serious CQB monster!

Both AEGs come with a steel 600 BB High Capacity magazine, although for the ‘TX’ model I would change this out to a ‘Bakelite’ ’74 version to bring the look fully up to date; LCT offer different styles and capacities of AK-style magazines at very reasonable prices (£13 will get you an AK74 70 rounder!), so this is easily achieved. A 7.4v LiPo is recommended, and this type of battery fits easily under the top cover, although you can squeeze in an 11.1V LiPo and this does have a positive effect on the rate of fire.

Of course, when you’re playing close in, you really don’t need as much power as when you’re engaging over longer distances, and again LCT obviously recognise this. With the magazine fully loaded and wound, and a charged NUPROL LiPo fitted it was time to run the ‘Babies’ through the chrono, and the result was a very highly consistent average in both models of 0.78 joule/290fps using .20g BBs.

Obviously, with such a short barrel, I did wonder how the wee ones would perform in relation to both range and accuracy, and once the hop and the iron sights were dialled in I was pleasantly surprised! At 10m, a normal CQB distance, I was able to nail a target ‘centre mass’ time and again, perfect for indoor and urban settings. The total absence of any stock at all means that as ranges increase things do tend to widen out significantly, but that of course is not what these little beasties were designed for. In fairness, with the ‘TX’ supported on some Rifle Rests from Thatchreed, I was able to send a BB out to the end of the 30-metres range reasonably accurately.

To sum up, the two models from LCT have proved to me again that this manufacturer is truly building some of the nicest AK-style AEGs out there right now, and each model I receive from them puts a big smile on my face. Both the classic ‘Baby’ and the ‘TX Baby’ come in at £199.00 apiece, which for what you’re getting in terms of looks, materials, build quality, and performance makes them absolutely tremendous value for money. If you’re a dedicated CQB player, then one of these cracking little Kalashnikovs should be on your shopping list; if like me you’re more into your outdoor scenarios, then don’t worry as LCT do a first rate AKS-74U for the same price as well!